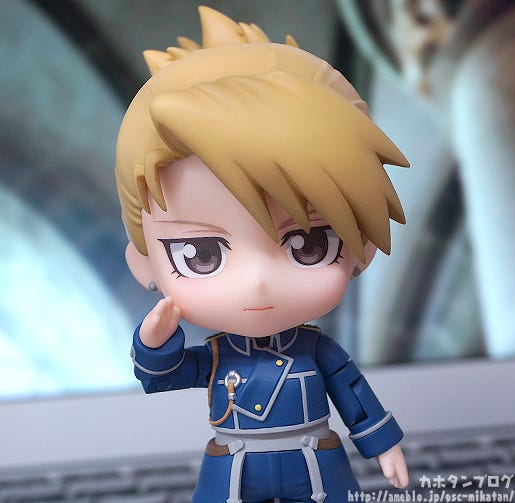 April! Somehow today feels like a brand new start! Today we have a bunch of new graduates joining the GSC ranks, and we also just announced the start of a brand new company, Good Smile Arts Shanghai, Inc., hosting the GOODSMILE ONLINE SHOP IN Kurayoshi Figure Museum and also taking part in Wonder Festival 2018 Shanghai! A whole bunch of new things to look forward to right from the start of the month! ( ･ㅂ･)و ̑̑

Anyway, today I’m going to be taking a look at….
Nendoroid Riza Hawkeye! From the popular “FULLMETAL ALCHEMIST” series comes a Nendoroid of Riza Hawkeye together with her beloved pet dog, Black Hayate! She comes with three face plates including a composed standard expression, a gentle smiling expression as well as a dumbfounded expression, sighing at the occasional incompetence of her superior.

She comes with articulated arm parts that allow her to be displayed in her iconic saluting pose, and she also comes with both two military pistols as well as a rifle. Enjoy all sorts of scenes in Nendoroid size – from the cool and composed lieutenant Hawkeye, to the gentle lieutenant playing with Black Hayate! Also be sure to display her together with the previously announced Nendoroid Roy Mustang!

“I pull the trigger of my own will. To defend those I love.”

Lieutenant Riza Hawkeye is joining the Nendoroid series, together with her adorable puppy, Black Hayate!

Her iconic uniform has been captured in careful detail together with the way her hair has been tied up! ▲ Black Hayate looks so cute from the back!

The expert sharpshooter also comes with two pistols and a rifle in order to display her in combat scenes!ヽ(ﾟ∀ﾟヽ 三 ﾉﾟ∀ﾟ)ﾉ Here she is displayed with Nendoroid Roy Mustang who is scheduled to be released later this month!! ♪ She also comes with special alternate hand parts, together with specially articulated arms which allow her to be posed in her classic saluting pose!
(｀・ω・´)ゞ ▲ Even as a Nendoroid she has such a dependable – and beautiful – appearance!

She comes with three face plates, the first of which is the standard expression seen above! The second is a much more gentle smile, perfect for use with Black Hayate! ♪ As you can see here she can even be posed holding her adorable puppy for a very cute scene! You can also see that Black Hayate’s head and font paws are articulated for various different poses!

She can also be posed smiling with the Colonel Roy Mustang for a rather cute two-shot! Her third face plate is a dumbfounded expression! (っ’ω’)っ)) The perfect expression to pose her sighing at the occasional incompetence of the Colonel, but it can also be used for all sorts of other situations!! ヾ(o´∀｀o)ﾉ

Enjoy the lieutenant in all sorts of different scenes!★
Nendoroid Riza Hawkeye! In addition, orders from the GOODSMILE ONLINE SHOP will include a “Incompetence” Text Plate & Stand (Japanese) as a bonus! This completes the pose with this expression perfectly! ε=(｡・д・｡) Preorders for many products at the GOODSMILE ONLINE SHOP are closing soon! Here are the products closing on the 5th & 12th April  2018 (JST)!