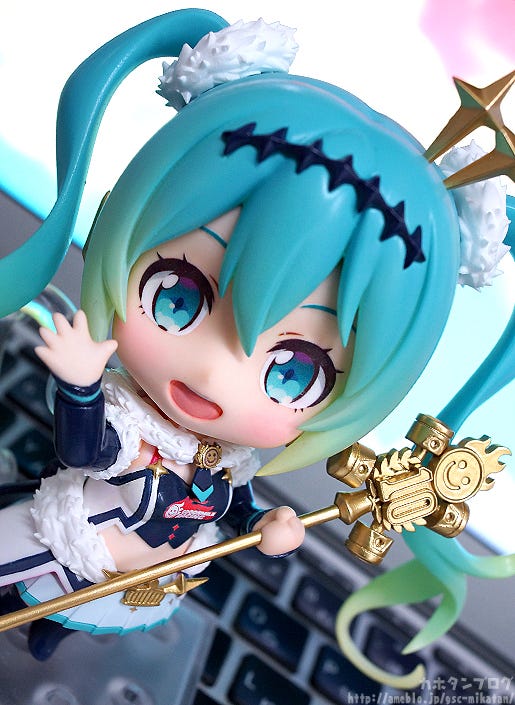 The cherry blossoms are in full bloom! This weekend will be perfect to go and see them!! Today I’m going to be taking a look at… The 2018 edition of the official character of the 2018 Hatsune Miku GT Project, Racing Miku, is joining the Nendoroid series! This year’s design is illustrated by Hiro Kanzaki and has been faithfully converted into adorable Nendoroid size! She comes with both a cheerful smiling face plate as well as a bit of a mischievous winking face plate.

Optional parts include the golden staff that was included to commemorate the 10th anniversary of the Hatsune Miku GT Project, as well as a Nendoroid-sized car that Miku can even ride! Be sure to add the adorable 2018 edition of the Nendoroid to your collection, and be sure to cheer for the team once again this year!

A Nendoroid of the official character of the 2018 Hatsune Miku GT Project!

This year is the Hatsune Miku GT Project’s 10th anniversary, and this is the design that was chosen to celebrate the commemorate the anniversary year! It looks so adorable in Nendoroid size! ♥

The attention to detail on the back of her design are also amazing! Note the red straps crossing on her back and the large ribbon which even includes the sponsor logos! Her twintails are attached with Nendoroid joints allowing them to be moved around into various different positions to match different poses!

She comes with two face plates including this cheerful smile! As well as a mischievous expression sticking out her tongue! She also comes with a selection of interchangeable hand and leg parts which allow you to recreate the illustration by Hiro Kanzaki in Nendoroid size! ♪ (Both the original illustration and Nendoroid are so adorable!!)

As with most of the Racing Miku Nendoroids in the past, she also comes with a Nendoroid-sized car which she can even be placed inside of! ヽ(ﾟ∀ﾟヽ 三 ﾉﾟ∀ﾟ)ﾉ Posed racing along the circuit! She will be available in two ways!

You can apply to be a personal sponsor on the following website: https://gsr-global.ecq.sc/. Applications will be open from the 22nd February at 12:00JST until the 9th April at 11:59JST.

This time around Racing Miku will also be available as a standard product from the GOODSMILE ONLINE SHOP and our partner shops.

In addition, we also have a scale figure version of the figure and another version of Racing Miku in production!! ♪ This time around the theme for Snow Miku is “A princess in snowy Hokkaido“. You can submit designs at the site below until the 20th April 2018 at 17:00JST!

Preorders for many products at the GOODSMILE ONLINE SHOP are closing soon! Here are the products closing on the 5th & 12th April  2018 (JST)!