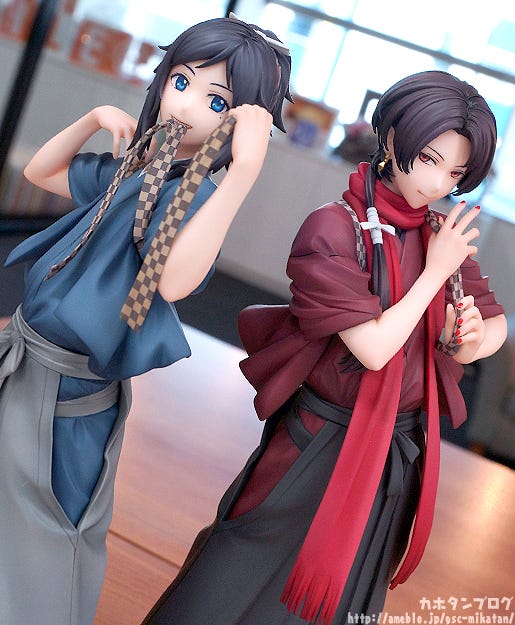 The figures are both based on the teaser image that was released for season one of the Touken Ranbu -Hanamaru- anime series, and captures the two swords in lovely detail! Let’s take a closer look at each of them! ((´д`●))三((●´д`)) From the anime series “Touken Ranbu -Hanamaru-” come a scale figure of the sword used by the Shisengumi’s Okita Souji, Kashu Kiyomitsu dressed in his uchiban outfit! The design captures Kashu’s cool and composed strength while also bringing out the everyday life feeling from the Touken Ranbu -Hanamaru- series!

His charming facial expression, silky black hair and flexible fingers have all been sculpted with careful detail creating a figure filled with highlights for fans to enjoy by their side. Be sure to add the charming Kashu to your collection!

Kashu’s confident look has been sculpted all the way to his intricate little fingertips, and the figure also captures his charming looks. The details of his outfit and hair are also not to be missed! The sculpt of his body is one thing, but the details put into the “weight” of the clothes and the various creases caused by the ties and angle of his body have also been captured beautifully. ▲ The sculpt really makes it look like he is “wearing” the clothes! (∩・∀・)∩ From the anime series “Touken Ranbu -Hanamaru-” come a scale figure of the sword used by the Shisengumi’s Okita Souji, Yamatonokami Yasusada dressed in his uchiban outfit! The design captures Yamatonokami’s design as faithfully as possible while also bringing out the everyday life feeling from the Touken Ranbu -Hanamaru- series!His refreshing facial expression with his sash held in his mouth, his supple looking arms and other details have all been sculpted with careful detail creating a figure filled with highlights for fans to enjoy by their side. Be sure to add the gentle Yamatonokami to your collection.

Yamatonokami Yasusada’s calm and gentle appearance is so relaxing to have by your side!! The everyday look of him tying up the sash creates such a beautiful picture!! (‘-‘*)(,_,*)(‘-‘*)(,_,*)

Just like Kashu, the details of the creases all over his outfit have been captured with amazingly intricate detail! ★ The loose feel of the sash as it hangs from his mouth, the overall trustworthy look of his character and those masculine looking hands have all been included in such lovely detail!

His ponytail has also been captured perfectly! ▲ I love the bushy look of his ponytail!

The figures look great displayed alone, but of course the look best when displayed together! It really brings out that Touken Ranbu -Hanamaru- atmosphere! ε-(o´ω｀o) ▼Displayed chatting with each other… ▼Both displayed looking toward you… Be sure to try out all sorts of different angles once you add them to your collection! ♪ They are currently up for preorder! ✿

Preorders for many products at the GOODSMILE ONLINE SHOP are closing soon! Here are the products closing on the 29th March  2018 (JST)!