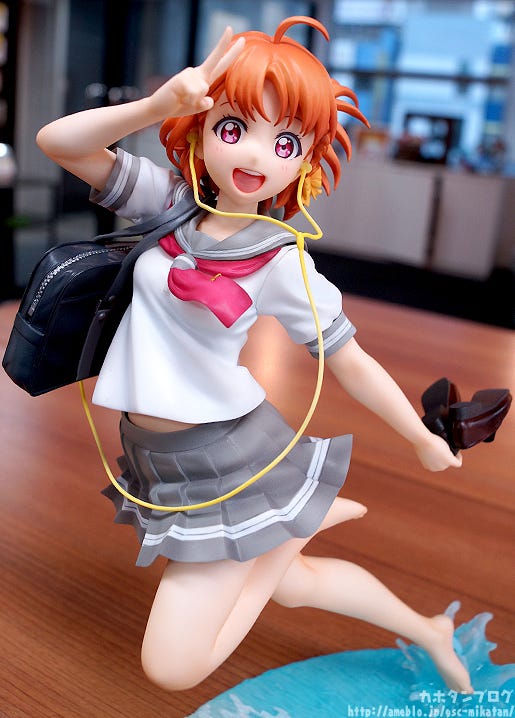 Today I’m going to be taking a look at the first “With Fans!” product…
Chika Takami: Blu-ray Jacket Ver.! The first in the “With Fans!” series of figures is LoveLive!Sunshine!!’s Aquors member Chika Takami! She has been sculpted in 1/7th scale based on the illustration that was used as a jacket illustration for the Blu-ray release of the series! She has a lovely cheerful smile on her face as she dashes along a beach.

The figure captures all the details of the original illustration as faithfully as possible, but also allows you to see all the angles that were never visible on the illustration! Be sure to enjoy the intricately detailed figure in your collection and look forward to more releases from WithFans! coming soon!

The first in a series of figures of the Aqours members based on the respective Blu-ray jacket illustrations!

The dynamic posing of the jacket illustration certainly was not one of the easiest poses to convert into figure form, but Chika has been captured in lovely detail from all sorts of different angles! ♪ ▲ Enjoy her at angles that were never visible on the illustration! ε-(o´ω｀o)

The dazzling smile on her face as she dashes along the beach captures Chika’s cheerful and energetic personality so nicely! Just looking at her makes me crack a smile as well!

Although you can’t see it from the front angle, her school bag is also included in amazing detail and even features the cute strap! ♥ ▲ The ability to view from any angle is what makes figures so special! (´□｀｡)

Her Summer uniform has been sculpted with care to preserve the fabric-like appearance with creases that capture the motion of her body. Her soft, healthy looking skin has also been captured in lovely detail! ▲ I personally love the curve of  her arm between her elbow and wrist!

Let’s take a little step back and take a look at what exactly “With Fans!” is!

“With Fans!” is a new series of products designed to create the goods that fans desire!

We are bringing together Bandai Visual’s series and the artisans at Good Smile Company to make the dreams of fans all over the world come true!

In other words, it’s a new product label brought to you by Bandai Visual and Good Smile Company, and this is the first of many products! The second product has in fact already been revealed and was even on display at a fan meeting last weekend: You Watanabe: Blu-ray Jacket Ver. (∩・∀・)∩

But anyway, lets get back to Chika Takami: Blu-ray Ver.! ♪

The figure also has a lovely base that captures the atmosphere of the beach from the Blu-ray cover, with a splash in the water as she jumps up out of the water!!

Also take note of the trademark ribbon and braid of her hair on one side and the four-lead clover hairpin on the other side, all sculpted and painted with great care to capture the most iconic parts of her character! From this angle you can also see the movement that is captured by the sculpt of the headphone cable as well as the red scarf part of her uniform!

The motion also means that her shirt is blowing about giving a lovely peek at her belly button and also her back! (・∀・)ｲｲ!! ▲ You can just feel the sea breeze!

It’s a figure that captures all of Chika-chan’s charm for fans to enjoy from any angle they please! ♥

The first figure in the “With Fans!” series, with many more to come! ☆ Preorders for many products at the GOODSMILE ONLINE SHOP are closing soon! Here are the products closing on the 29th March  2018 (JST)!