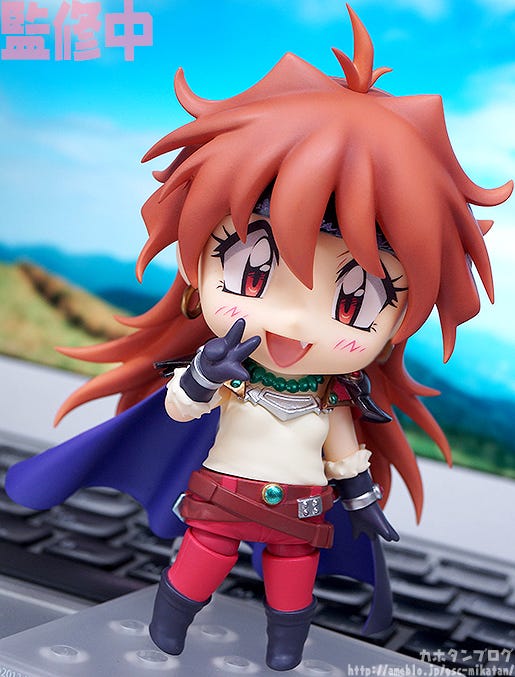 Today I’m going to be taking a look at…
Nendoroid Lina Inverse!☆ From the fantasy novel masterpiece “Slayers” comes the long-awaited Nendoroid of the self-proclaimed beautiful sorceress, Lina Inverse! Even in Nendoroid size the magical glyphs on her bandana and the details of the rest of her equipment have all been captured as faithfully as possible. She comes with a total of four face plates including a standard face, a winking face, a incantation face as well as an expression for combat scenes.

She also comes with optional parts which allow you to pose her casting her iconic “Dragon Slave” spell, from the incantation through to the release of the spell! In addition, the Sword of Light with the incomplete version of Giga Slave cast upon it is also included for her to wield. Be sure to add her to your Nendoroid collection while looking forward to the revival of the original novel series!

“Heed me, thou who is darker than dusk,
thou who is more red than blood…”

From the classic fantasy light novel series “Slayers” which has recently been announced to have a continuation comes a Nendoroid of the genius sorceress, Lina Inverse!!

As you can see from the first back shot photo, even the magical glyphs on her bandana and her flowing cape have been faithfully captured on the Nendoroid! Her cute moe fang and unique hairstyle have also been carefully converted into Nendoroid size while still keeping their unique appearances from the series! ♪

Along with the lively standard face plate above, she comes with three other alternative face plates for a total of four! Let’s take a look at each of them… The Nendoroid’s design definitely captures the older style of animation, and Lina just looks so perfect with a winking expression!! (*´꒳`*)

Even though I have’t changed the pose that much from the previous photo, the different expression makes for a very different atmosphere! She is so cute!!

Here I’m just going to go into a string of photos after the incantation!

“Heed me, thou who is darker than dusk,
thou who is more red than blood,
In the name of those buried in the passing of the eons,
I make this vow to the abyss.
Mark all fools that stand in our way,
Let your strength merge with mine;
So that we may deliver doom to all alike! She comes with a variety of parts that allow you to pose her casting and firing her iconic Dragon Slave spell!! She even comes with an alternate back hair part that allows her hair to rise up nehind her as she casts the spell! Her cape is fitted with a joint which allows it to be moved upward in a similar way to the hair to fully capture the power swirling around her!! ٩( ‘ω’ )و

In addition, the Sword of Light with the incomplete version of Giga Slave cast on it is included for her to wield! ☆ ▲ Looks great together with the combat face plate!

The incantation face plate can also be used as an embarrassed expression depending on the pose and angle that you look at it from! ▲ The various face plates allow for all sorts of situations!

Here are all the effect parts laid out together to give you an idea for the volume of the parts included with the Nendoroid! ε=(｡・д・｡) In addition to all these parts she also comes with three more face plates! All sorts of parts to recreate your favorite scenes from the classic series! ☆

If you don’t add her to your collection she’ll go berserk!
Nendoroid Lina Inverse!

She’ll be up for preorder from the 20th March!☆

Last but not least, orders from the GOODSMILE ONLINE SHOP will also include a Sword of Light and Pointing Hand Parts as a bonus!! ★ Preorders for many products at the GOODSMILE ONLINE SHOP are closing soon! Here are the products closing on the 23rd March  2018 (JST)!