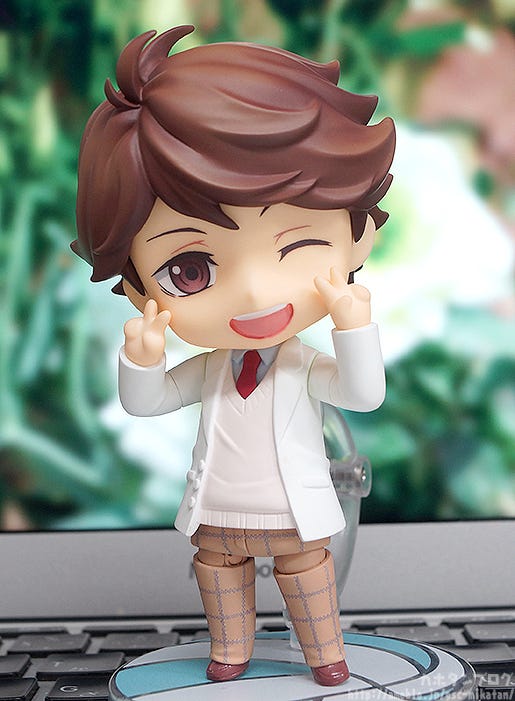 From the popular manga series “Haikyu!!” comes a Nendoroid of Toru Oikawa dressed up in his school uniform! He comes with two face plates including a winking expression as well as an expression pulling hid eyelid down and sticking out his tongue to recreate the gesture he showed to Kageyama in his junior high years. He also comes with some milk bread allowing you to display him in more everyday scenes together with his favorite food!

The Nendoroid also includes a round base with a volleyball pattern as well as a background sheet based on the Chindouchuu ramen shop that the Aobajohsai High School Volley Ball team often visited. Be sure to display him together with the previously announced Nendoroid Shoyo Hinata: Jersey Ver. and Nendoroid Tobio Kageyama: Jersey Ver.!

The “Grand King” rejoins the Nendoroids dressed I his school uniform!

The “Grand King”of Aobajohsai High is joining the Nendoroids once again, this time dressed up in his school uniform instead of his volleyball outfit! ▲ Even the pattern on his pants has been captured! (｡･ω･)ﾉﾞ

This time around the Nendoroid comes with two different face plates! The first of which is the playful winking expression which is used in the above photos! In his hands, he holds… Filled with cream… it looks so delicious!! Moving onto his second face plate, we have an expression pulling hid eyelid down and sticking out his tongue to recreate the gesture he showed to Kageyama in his junior high years!! (●‘∀‘●)ﾉ” This allows you to capture the more childish side of his personality in adorable Nendoroid size! The tongue sticking out of the expression has been sculpted to really stand out, and has rather impressive detail for a Nendoroid face plate! I’m sure it can be used to create all sorts of interesting situations in Nendoroid size! (´□｀｡)

Also take note of the special base! He comes with a special base with a volleyball-like design featuring the color’s of  Aobajohsai High School!

In addition, you can also of course make use of the face plate and other parts from Nendoroid Toru Oikawa together with this Nendoroid for even more posing options! For example… Also, while he does wear the uniform slightly differently, you can also make use of the head of Nendoroid Hajime Iwaizumi to display Iwa-chan in his uniform too! ▲ The Aobajohsai High School has such a refreshing look!

In addition, the Nendoroid also comes with a background sheet made to look like the “Chindouchuu” ramen shop which can be used as a backdrop for your Nendoroids! (っ’ω’)っ)) * The above image has the background sheet reinforced for photos

By the way, using the previous Nendoroid  Toru Oikawa as an example, you’ll find this background sheet inside the box… After you’ve pulled the figure out… You can use it as a background as soon as you take it out the box!

Be sure to add the Grand King’s school uniform version to your collection!
Nendoroid Toru Oikawa: School Uniform Ver. ! They also come with similar volleyball bases and background sheets!! ★ Be sure to consider them at the same time!

Preorders for many products at the GOODSMILE ONLINE SHOP are closing soon! Here are the products closing during February 2018 (JST)!