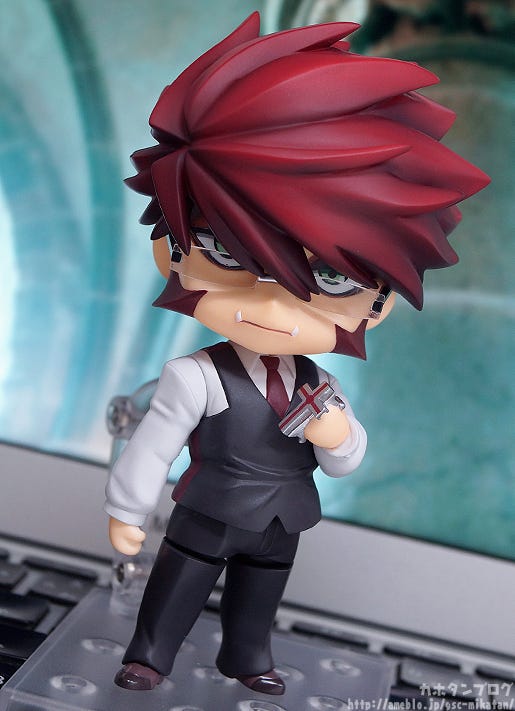 Today I’m going to be taking a look at…
Nendoroid Klaus V Reinherz! From the anime series Blood Blockade Battlefront & Beyond comes a Nendoroid of the leader of Libra and user of the Brain Grid Blood Battle Technique, Klaus V Reinherz! He comes with three face plates including a standard masculine expression, an intimidating combat expression as well as a calm expression for more gentle poses.

He comes with a knuckle guard and hand parts wearing gloves allowing you to easily pose him in combat scenes. Other optional parts include his business card, a donut and a brown paper bag. He also comes with a clear plate with text based on his character introduction which can be placed in front of him to capture the atmosphere from the series! Be sure to display him with the previously released Nendoroid Leonardo Watch and recreate your favorite scenes from the series!

The third son of the Reinherz household and leader of the secret organization Libra, Klaus V Reinherz is joining the Nendoroid series!!

His iconic hairstyle and fangs have been shrunk down to Nendoroid size and both look so adorable!!! Plus, even though his build has been adjusted to suit the Nendoroid design, he still keeps that big and bulky look from the series!!

He also looks awesome from the back! The cross-shaped knuckle guard that is needed  to pose Klaus in combat scenes has been faithfully included, and a gloved hand is also included to faithfully capture his fighting style!! Just like the previously released Nendoroid Leonardo Watch, he also comes with a character introduction plate which can be placed in front of him like this to capture his introduction scene from the series!

Moving onto his 2nd face plate, we have a vigorous combat expression! His strong will to protect his friends and the world is really captured in this expression!

His hips feature a ball joint allowing the hips to be displayed slightly forward or bent which allows for much more dynamic action scenes! ★ The open mouth of this face plate means you get a nice close look at his adorable teeth and fangs!!

Anyway, moving on to his third face plate we have a calmer expression for those more everyday scenes!! (*´꒳`*) The sharp white eyes of this expression both capture Klaus perfectly and suit the Nendoroid design so nicely!! The mouth on this expression is also straighter on this face plate compared to his standard expression! ♡

In his hand, he holds his business card!! ヽ(ﾟ∀ﾟヽ 三 ﾉﾟ∀ﾟ)ﾉ ▲ With this he can introduce his “Secret Organization” whenever needed!

In addition, he also comes with a paper bag and donut, which is perfect for recreating a scene together with Nendoroid Leonardo Watch!☆ You’ll notice that he also comes with non-transparent glasses which can be used with any of the face plates for a rather different look!

Here is the combat expression with the alternate glasses! (●‘∀‘●) Be sure to try all sorts of different combinations once the adorable leader of Libra joins your collection!! ( ･ㅂ･)و ̑̑
Nendoroid Klaus V Reinherz! He’ll be up for preorder from the 26th December!

Keep your eyes on the Good Smile Company Website for more details! ♪

In addition, purchases from the GOODSMILE ONLINE SHOP will also include a Nendoroid Plus Rubber Strap: Klaus V Reinherz as a bonus! ☆ Last but not least, we are also going to be rereleasing…
Nendoroid Leonard Watch! For those that missed out or simply want another one in their collection, be sure to order him together with Klaus!!

Preorders for many products at the GOODSMILE ONLINE SHOP are closing soon! Here are the products closing on the 11th of January 2018 (JST)!