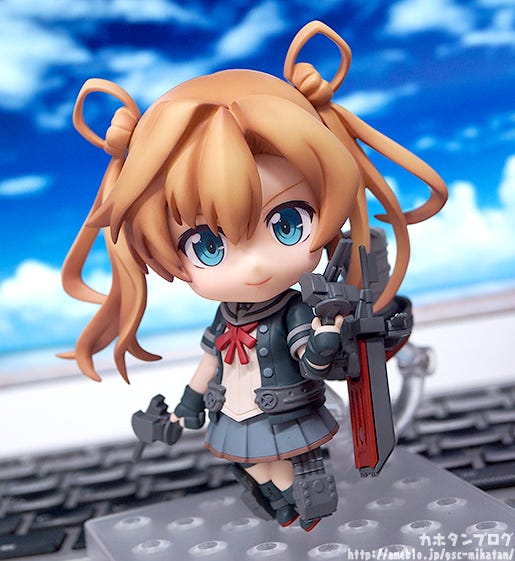 We’re reaching the end of the year, which means it is almost time for GSC to start the big end-of-year clean up around the offices. I can’t say I’m looking forward to it…

Anyway, today I’m going to be taking a look at…
Nendoroid Abukuma Kai-II!☆ From the popular browser game “Kantai Collection -KanColle-” comes a Nendoroid of the upgraded version of the Nagara-class light cruiser, Abukuma Kai-II! She comes with three face plates including a standard expression, a half-damaged expression as well as a flustered expression. She comes with turret firing and torpedo effects, as well as a water skiing effect parts to display her maneuvering along the seas!

A miniature Daihatsu landing craft is included together with beach parts to display it on and a miniature Kouhyouteki submarine with water effect parts are also included allowing you to really bring out the KanColle world in your collection! The ship parts are also highly detailed, and the part attached to her arm can even slide out! Be sure to add the easy-to-use light cruiser to your fleet!

The upgraded version of the sixth Nagara-class light cruiser, Abukuma Kai-II is joining the Nendoroid KanColle Fleet! The cute school uniform-esque outfit complete with a ribbon on her chest has been faithfully converted into Nendoroid size for Admirals around the world to enjoy in their collection!! ♪

Her characteristic hairstyle has also been shrunk into Nendoroid proportions, but looks just as adorable as ever! Note that the left and right sides are slightly different, just like in her illustration! (｡･ω･)ﾉﾞ In addition, the twintails are attached with a ball joint allowing them to be moved around to match various different poses!

Optional parts include a Kouhyouteki submarine with water effect parts  to display her sneaking up on the enemy!! ★ ▲ Her standard expression is so cool and confident!! (・∀・)ｲｲ!!

Moving on to her second face plate, we have a pained expression based on her half-damaged expression!! This time around we also decided to include water skiing effect parts which allow you to display her as if she was gliding along the ocean at high speeds!! ♪ A flustered expression made in the image of the above line!!! You can just imagine her cute voice looking at this face!!

In addition, she comes with a Daihatsu landing craft part and a beach part to display it landing!! ♪ ▲ You can just imagine the little KanColle helpers on the landing craft!

As you may have noticed, the arm ship parts slide out like so! ☆

The shore part included for the landing craft is also nicely detailed! ▲ It attaches onto one of the corners of the Nendoroid base! ▲ Great parts for use with other KanColle Nendoroids too!

Be sure to add adorable sixth Nagara-class light cruiser to your fleet!
Nendoroid Abukuma Kai-II!

She’ll be up for preorder from the 21st December!★

We also have another KanColle Nendoroid in the works, so stay tuned!!
Nendoroid Haruna Kai-II!