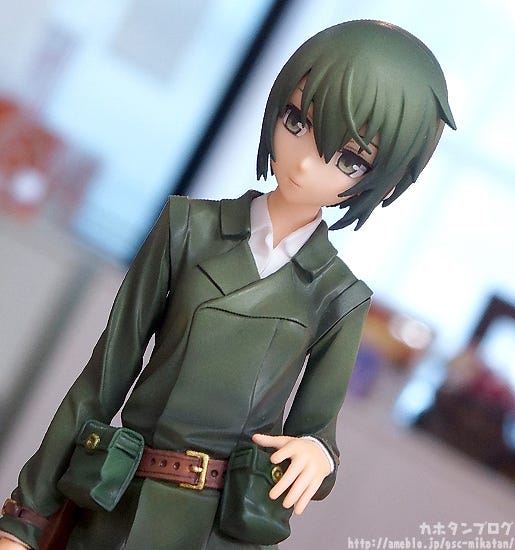 The year is coming to an end but we still have many new items coming up this December! Starting off with this one up for preorder tomorrow, the 1/8th scale…
Kino: Refined Ver.! Good Smile Company originally released this 1/8th scale figure of Kino back in 2008, but with the anime series on the way we have revised the old sculpt and created this “Refined Ver.” for both new and old fans to enjoy in their collection!

Kino is the main character of Kino’s Journey, a story about a girl who travels the world with her talking motorcycle Hermes. The figure features Kino holding her favorite persuader gun named “Canon” with gentle sculptwork that captures the atmosphere of the series perfectly. Smoke made with semi-transparent parts wafts out from the gun’s muzzle, creating an intricately detailed figure that fans are sure to enjoy in their collection.

The character that travels around the world with her talking motorcycle Hermes and never stays in the same country for more than three days – Kino as a 1/8th scale figure! Her neat shirt and jacket as well as the details belt and pouches have all been captured in lovely detail! (●‘∀‘●)ﾉ” The creases and shadows all over her outfit really bring the figure to life! She might look a little defenseless at first glance, but that twist her in hips and the gun in her hands certainly say otherwise!! Plus just look at the lovely curves around her hips!!

Her neat hair and calm facial expression have also been captured for fans to enjoy by their side whenever they please! ヽ(ﾟ∀ﾟヽ 三 ﾉﾟ∀ﾟ)ﾉ As you may have read in the product description or guessed from the name, this is in fact a refined version of a Kino figure that was actually released back in 2008!

The sculpt and paintwork have both been brushed-up, and considerably more detail has been added to the figure!

The pouches around her hips are a perfect example, featuring much more detail that make them look much more realistic than on the previous version! ▲ Her weapon of choice, the persuader “Canon” is held in hand,
with a detailed holster on her side as well!

Also take note of the smoke curling out from the barrel of the gun! ♪ ▲ The translucent parts, paintwork and sculpt all give the
feeling of the smoke wafting away in the wind!

Plus, take a close look at the base! The grass on the side, the soft looking sand and the motorbike trail left by Hermes! The various textures are such a pleasure to look at!

A figure overflowing with the atmosphere of the series!♪ She’ll be up for preorder from tomorrow!★

In addition, we also have a Nendoroid on the way to look forward to!
Nendoroid Kino! Preorders for many products at the GOODSMILE ONLINE SHOP are closing soon! Here are the products closing on the 21st and 14th of December (JST)!