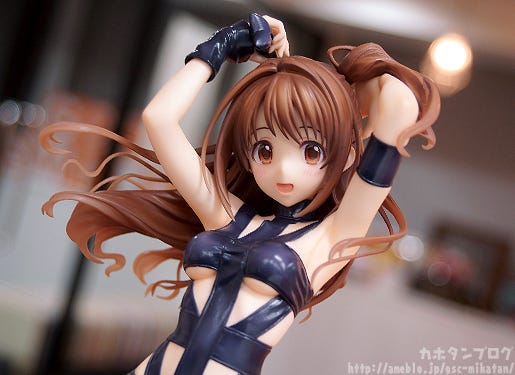 It has suddenly become so much colder that I had to double my blankets at night! Anyway, today I’m going to be taking a look at the 1/7th scale…
Uzuki Shimamura: HOT LIMIT Ver.!★ The second of the HOT LIMIT Anniversary Collaboration Figures to celebrate the 20th anniversary of T.M.Revolution’s debut is Uzuki Shimamura from THE IDOLM@STER CINDERELLA GIRLS, a series which has just celebrated its 6th anniversary! The figure is based on the illustration by Annin Doufu that was included in Takanori Nishikawa’s book distributed at Comic Market.

The figure features Uzuki with her hair ribbon in hand and her boots removed and placed by her side in a pose that tells a complete story! It’s a rather different look compared to her standard idol outfits, so be sure to add the HOT LIMIT “bare-footed” Uzuki to your collection!

The second in the HOT LIMIT collaboration figure series!

A 1/7th scale figure of the illustration by Annin Doufu that was included in Takanori Nishikawa’s book distributed at Comic Market!! ♡

This is the second figure in the HOT LIMIT anniversary series following on from the previously announced Super Sonico: HOT LIMIT Ver.! ♪ ▲ She looks stunning from the back!

Even in such a bold outfit, Uzuki’s dazzling smile is just as adorable as ever, creating a lovely mix of both cute and sexy for fans to enjoy!! You’re so cute, Shimamu!!! Note that the iconic curls at the ends of her hair make use of semi-see-through parts which gives her hair a more translucent look as it flows around her! ▲The details of  her hair are really impressive!

Note all the details on her outfit as well! Even though it is a rather simple, black outfit the creases all over the design show just how tight fitting it is! ★ The way the bare skin seems to pop out in each of the gaps makes her look so very touchable as well! The whole body looks like it would be so smooth and soft to the touch!! ▲The curves of her hips and even the back of her knees are amazing! ( ･ㅂ･)و ̑̑

Let’s take a closer look at her hands! ♪ If you look close you’ll even notice her nails are painted with a very light pink that has a slight shine to it as well!ヽ(ﾟ∀ﾟヽ 三 ﾉﾟ∀ﾟ)ﾉ In her hand she holds her hair ribbon, and you can see the way her fingers have been sculpted to capture just the right amount of force as she loosely hold the ribbon!

Plus if we look at the boots at her feet! The soles even have a starry design!

Even the boots which she isn’t even wearing have been sculpted and painted with such intricate detail! Be sure to take a nice close if you choose to pick her up!! ♪

Be sure to add this memorial item to your collection! Be sure to keep your eyes on the Good Smile Company website for more details!

Plus we still have one more figure in the HOT LIMIT series to look forward to!
Eriri Spencer Sawamura: HOT LIMIT Ver.! Preorders for many products at the GOODSMILE ONLINE SHOP are closing soon! Here are the products closing on the 23rd of November (JST)!