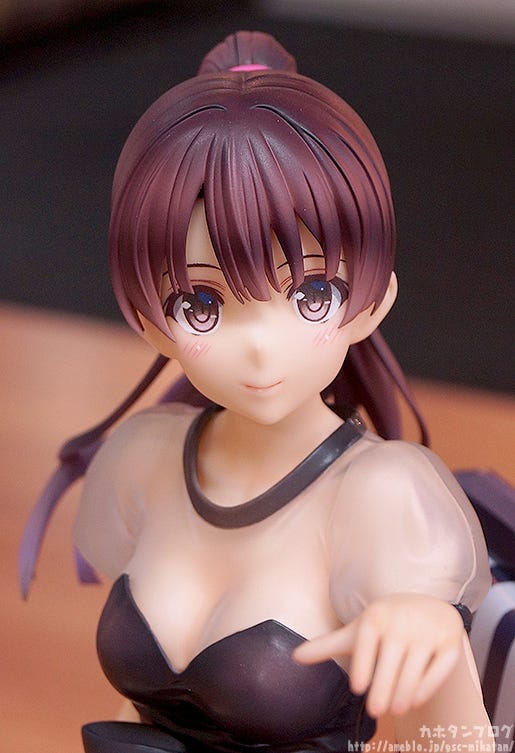 Today I’m going to be taking a look at…
Megumi Kato: Dress Ver.!☆ From “Saekano: How to Raise a Boring Girlfriend” comes a Megumi Kato: Dress Ver. figure made in collaboration with DRAGON MAGAZINE (KADOKAWA)! The figure is based on an original illustration by Kurehito Misaki in DRAGON MAGAZINE, which featured Kato Megumi wearing a dress.

The black dress has been carefully sculpted to preserve the thin appearance of the fabric, and makes use of translucent parts to keep the see-though appearance in tact. The base features a carpet scattered with rose petals for a more mature atmosphere, which allows fans to enjoy Megumi with a rather different appearance to usual.

From “Saekano: How to Raise a Boring Girlfriend” comes a 1/7th scale figure of Megumi Kato wearing a black dress in a lovely mature atmosphere! The figure is based on an original illustration by Kurehito Misaki in DRAGON MAGAZINE! ♥

The figure itself is beautiful, but also note the lovely design of the chair along with the carpet base with flower petals scattered about! The shiny look of her pink shoes and stylish dress have all been sculpted and painted in such amazing detail! While the pose is rather simple, the fact that her hair has a bit of a dynamic feel to it makes it seem as if the figure captures the exact moment that she extended her hand out to her partner! ((´д`●))三((●´д`)) The creases in the dress around her hips show how tight-fitting the dress is while also showing off the curves of her body very nicely! It’s not a super showy dress, but the attention to detail still makes it wonderful to look at! (●‘∀‘●)

What would you do if this beautiful heroine looked up to you with this smile and extended her hand out to you? The fact that she has a slightly upward gaze really completes the scene!

I personally also like the relaxed right hand by her side! ▲ A look at her shoulder blades through the dress!

The petals that are strewn on the base are not stuck onto the base and can be freely moved around! This also of course means you can choose to remove them as well! ▲The carpeted look of the base also adds an extra level of elegance! ☆

The boring girlfriend is all dressed up for you!
Be sure to add her to your collection! ♥
Megumi Kato: Dress Ver.! She’ll be up for preorder from the 24th October!☆

Be sure to check the Good Smile Company website for more details! ♪

This figure will be on display at the Fantasia 2017 Festival 2017 taking place tomorrow, the 21st October at the Bellesalle Akihabara! If you happen to be in the area be sure to come by and take a look! I also get the feeling that a newer version of this figure from Max Factory might be on display as well! Preorders for many products at the GOODSMILE ONLINE SHOP are closing soon! Here are the products closing on the 26th October (JST)!