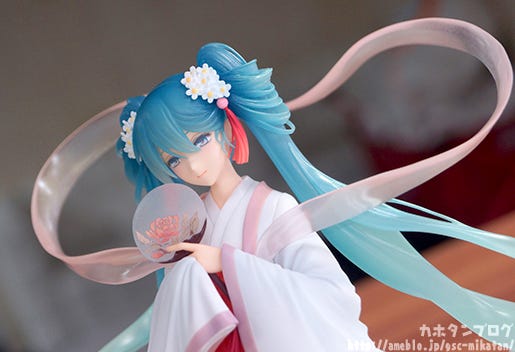 I only found out there were various different types of mooncakes after I started working at GSC. I always thought they were a delicious sweet treat, completely unaware that there are others that have a much more savory approach! I’ll stick to the sweet kinds though! From the “Character Vocal Series 01: Hatsune Miku” comes a 1/8th scale figure of Hatsune Miku wearing dressed up in outfit based on those seen at the Mid-Autumn Festival in China.

The translucent feeling from the original illustration by Chinese illustrator Rella has been captured as faithfully as possible, with a beautiful sculpt that captures her elegance. The paintwork is also a highlight of the figure, with the gentle colors of the design blending with the translucent parts to create an stunning appearance. Enjoy a moonlit light with the gentle smile of Harvest Moon Miku by your side!

“Won’t you admire the moon with me?”

This beautiful figure was on display at the recent CICF Expo event held in China, and now she is ready for preorders to open! The stunning version of Hatsune Miku based on an illustration by Rella has been transformed into a figure that captures the translucent, flowing feel of the illustration as faithfully as possible in figure form!!

The poster you can see above is based on the exact angle of the original illustration to show just how similar it is! I just had to show it off on the blog!! (∩・∀・)

But let’s move in with a closer look with the normal selection of photos! While the figure is in a rather simple standing pose, there are still so many different things to see! First and foremost are they lovely twirls of her hair!! If we take a look from the top you can get a good feel for the circular twirls that her hair makes as it dances downward!

The best thing about the twirls is that they are so gentle which match with the overall feel of the figure, while still providing a dynamic feeling to the figure! The original illustration obviously was only ever in two dimensions, which made transforming this into three dimensions was not a simple task, but the artisans over in the production team have brought out a sculpt that looks beautiful no matter what angle you choose to look from! You really need to see the sculpt in person to really appreciate it!

Also note the details on the very top! Can you see the little sprinkles of gold on her hair?

This silver dist is included to recreate the light of the moon as it shone on the top of her head on the original illustration! The ever so slight gold effect is to incorporate this golden light on the design of the figure as well! ▲ The original illustration that the figure is based on!

The long ribbon-like part of her outfit is made from transparent parts to capture the original look, but also have the golden dust for that shiny reflection! (‘-‘*)(,_,*)(‘-‘*)(,_,*) ▲ You can see it much better against a black background! ♪

All this and all I’ve really spoken about is her hair! There is still so much to enjoy about this figure! Just look at all the different layers of her outfit which have each been intricately detailed! ε=(｡・д・｡) The frills at the very bottom of the dress are also individually sculpted in lovely detail!  ((´д`●))三((●´д`)) The pearl paintwork together with the sculpt that makes it look like it really is a soft fabric… it has such a mysterious yet eye-catching appearance!

Even though the figure isn’t painted with very flashy paintwork, there is something about it that just makes her so very charming! She just draws you in!! I don’t know how else to explain it! Depending on the angle you choose to look from, the expression can change between being rather cheerful looking to having a much more wistful look! Be sure to add her to your collection and find the angle that you like best! She will be up for preorder from tomorrow, which is the harvest moon!!

Be sure to keep your eyes on the Good Smile Company Website for more details!

Preorders for many products at the GOODSMILE ONLINE SHOP are closing soon! Here are the products closing on the 5th and 12th October (JST)!