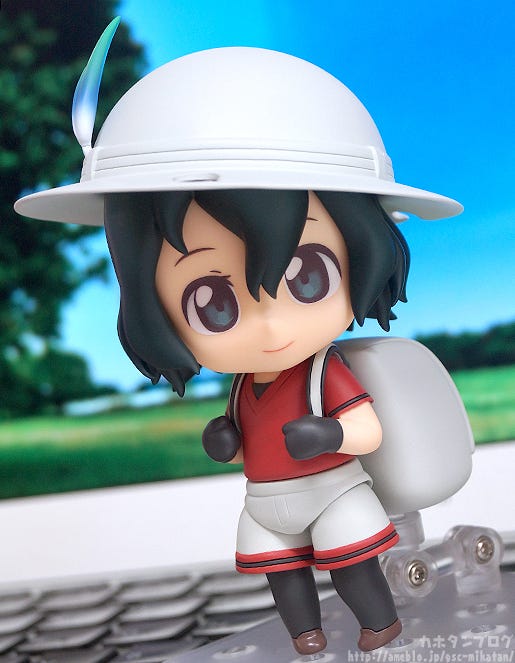 Today I’m going to be taking a look at…
Nendoroid Kaban! From the popular anime series “Kemono Friends” comes a Nendoroid of Kaban-chan! She comes with three face plates including a gentle standard expression, a shouting expression to recreate the “Please don’t eat me” scene as well as a smiling expression to show her enjoying her travels around Japari Park.

Her trademark large backpack is included and can be opened and closed for various different poses. She also comes with a Japari Park map to pose her strolling around the park as well as the paper aeroplane from episode one. Be sure to display her together with the previously announced Nendoroid Serval!

From the anime series that captured the hearts of young and old fans alike “Kemono Friends” comes an adorable little Nendoroid of Kaban-chan! The large bag on her back, iconic feather in her hat, her slightly messy looking hair and even her baggy shorts have all been shrunk down carefully to Nendoroid size!

Let’s take a look at the optional parts that she comes with! (●‘∀‘●)ﾉ” Special hands to display her holding the map are also included for the cute pose you can see above! The anti-Cerulean paper airplane seen from episode one! It comes with it’s very own stand allowing you to display it floating through the air as if just thrown!

Next, let’s take a look at her other face plates!

Along with the gentle smiling face above, she also comes with this memorable expression from the series! (ﾟ∀ﾟヽ 三 ﾉﾟ∀ﾟ)ﾉ A worried looking shouting expression which can be used to recreate the scene where she first meets Serval!! Nendoroid Serval is scheduled to released next month, so I decided to display her together with Kaban-chan for this review! ★

Kana-chan is adorable all by herself, but recreating the adventures with her friends makes it all the more enjoyable!

Moving onto her third face plate… a cheerful smiling expression! Kaban-chan’s innocent smile from her adventures can be enjoyed in Nendoroid size!! As you may have noticed, the pink feather she received from Arai-san is also included to put on the other side of her hat! ♪

Plus, the Lucky Beast that is included with Nendoroid Serval… Can even fit inside of Nendoroid Kaban-chan’s bag! Not to mention the bag can open and close!

Lucky Beast’s tail is detachable – you will need to take the tail off in order for him to fit inside the bag!! (σ・∀・)σ

Be sure to add the friendly explorer to your collection!
Nendoroid Kaban!

She’ll be up for preorder from tomorrow!! ★

In addition, purchases from the GOODSMILE ONLINE SHOP will also include an Arm Part with Lucky Beast (Final Episode Details) + Bare Left and Right Hand Parts as a bonus! Be sure to consider it when preordering!! (●´Д｀●)ﾉ This Soft Vinyl Lucky Beast from AQUAMARINE will also be going up for preorder tomorrow! He can even wear Nendoroid Kaban-chan’s hat! If you consider this wearing! Last but no least, a semi-related item… PLM will have these Dioramamansion 150: Plains / Jungle display backgrounds up for preorder too! They of course match up with the Kemono friends characters really nicely!! ♡