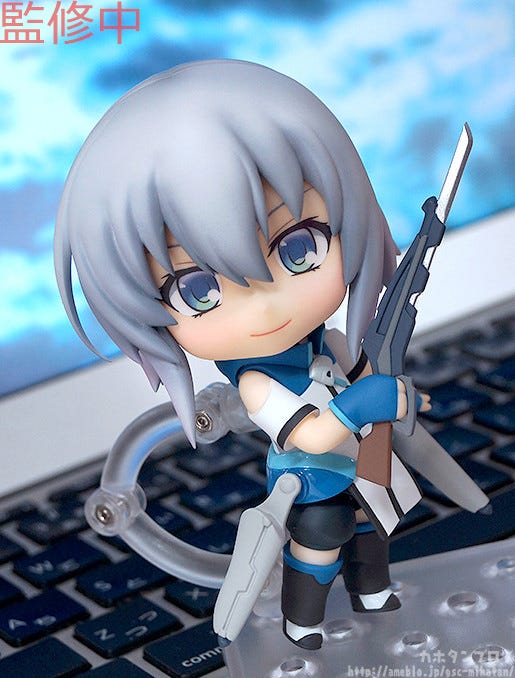 I had an excellent long weekend that has charged up my otaku batteries for the week! Both my stress and my wallet feel much lighter thanks to the break!!

Anyway, today I’m going to be taking a look at…
Nendoroid Ernesti Echavalier!★ From the anime series “Knight’s & Magic” comes a Nendoroid of the robot loving main character, Ernesti Echavalier! He comes with three face plates including a composed standard expression, an excited expression for when he is near one of his beloved robots as well as an mesmerized expression.

He comes complete with his Gunlike Rod invention together with effect parts to display it being used, as well as a holster. He also comes with a blueprint for Silhouette Knight as well as magic effect parts for all sorts of poses! Enjoy the cute and reliable Ern and his love for robots in Nendoroid size!

From the anime series that has its last episode airing next, “Knight’s & Magic” comes a Nendoroid of the main character with amazing knowledge and love for robots, Ern! Even in Nendoroid size the Gunlike Rod he invented can be seen holstered away at his hips! The paintwork switches from matte to gloss all over the figure to capture the various different textures of his outfit! His hair also features the iconic pink gradient at the sides and all along the back! ♡ The figure makes use of ball joints at the top of the leg allowing for all sorts of posing opportunities while still keeping his shorts looking natural!

The Gunlike Rod can also comes with special effect parts that connect to the holster to display him in aerial battles!(｀・ω・´)ゞ ▲ The parts make use of semi-translucent materials!

In addition, he also comes with magic effect parts based on those from the series! ♪ ▲ A stand to display it in various different angles is also included!

Along with the standard smiling expression above, he also comes with an excited expression for when he is near one of his beloved robots… As well as a mesmerized expression for when he fantasizes about them! The piece of paper is so tiny and yet you can still make out the design to be Silhouette Knight! (●‘∀‘●)ﾉ”

Be sure to add the the silver knight to your collection!
Nendoroid Ernesti Echavalier!

He’ll be up for preorder from the 22nd September!

Be sure to take a look at the Good Smile Company Website for more details!

*Images on the blog represent a product still in-development. The final product may differ.