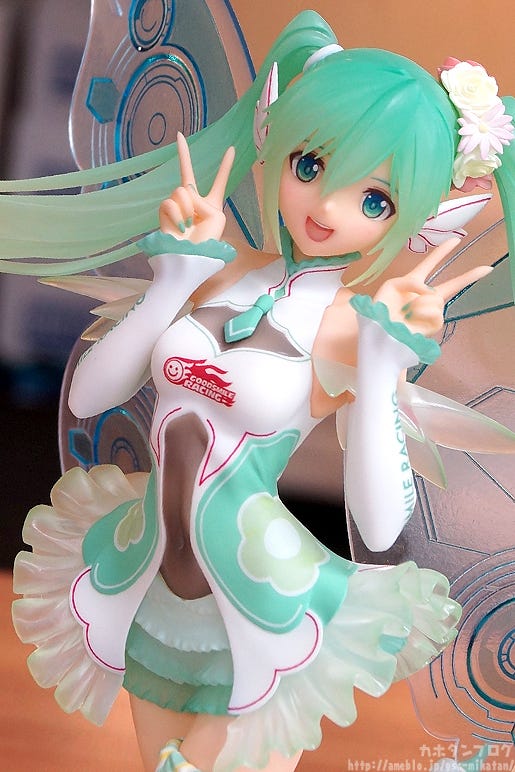 There is only one week left of August! I’ve hardly had time to enjoy the summer and Autumn is already starting to sneak up! A full scale figure of the official character of the Hatsune Miku GT Project “Racing Miku” in her 2017 version. The adorable fairy Miku illustrated by popular artist Tony has been transformed into a figure with careful attention to all of the details of her original design.

The figure makes use of multiple translucent parts in order to being out the see-through feel of the colors on the original illustration. The curves of her flexible, healthy looking body have all been captured to create a figure ready to charm both fans and newcomers alike! Be sure to add the fairy-sized Miku to your collection!

A Scale Figure of the Fairy Racing Miku! ♡

The official character of the 2017 Hatsune Miku GT Project has been transformed into a cute scale figure! The Nendoroid and figma versions of Racing Miku 2017 Ver. are both only available to personal sponsors of the racing team, but the scale figure is available as a standard item and will be available at all the normal stores! ▲ This is how she looks from the back!

The soft coloring of her green outfit has been captured beautifully, and all those translucent frills look so adorable!! ♪ The different layers of frills make use of different colors!

The frills are not the only part of the figure that make use of translucent parts though! Her hair also gets more transparent toward the ends while also featuring a slight yellow-green gradient to faithfully capture the original illustration by Tony! Plus the wing parts also of course have a see-through appearance! ★ The fact that there are so many parts of the figure with a transparent look gives the whole figure such a light and airy feeling that matches the fairy theme nicely! (´□｀｡) If look quote close you can even make out the shape of her rib cage underneath her chest! Amazing sculptwork! Not to mention the see-through center which gives you a nice look at her belly button! ▲Also note the creases in the outfit due to the twist in her hips!

Another of my personal favorite places to look on figures… ▲The sculpt and shadows make it so easy to picture
the shape of the leg underneath the outfit! (｀・ω・´)ゞ

By the way! This figure is actually a full 1/1 scale figure!

The reason for this is that this year’s Racing Miku is a fairy, and fairies are not that big!! Here she is compared with an iPhone 6S! Be sure to add the cute fairy Racing Miku to your collection!
Racing Miku 2017 Ver.! Plus this weekend if the next race in the SUPER GT! The 6th race which will be taking place at the Suzuka Circuit!! (●‘∀‘●)ﾉ” In the last race the Miku car had a 70kg handicap and still managed to come in second place, bringing the team’s overall ranking to first place!!

I look forward to how this weekend’s race will unfold!! I hope everyone will be supporting the team too!! (っ’ω’)っ))

Preorders for many products at the GOODSMILE ONLINE SHOP are closing soon! Here are the products closing next week!