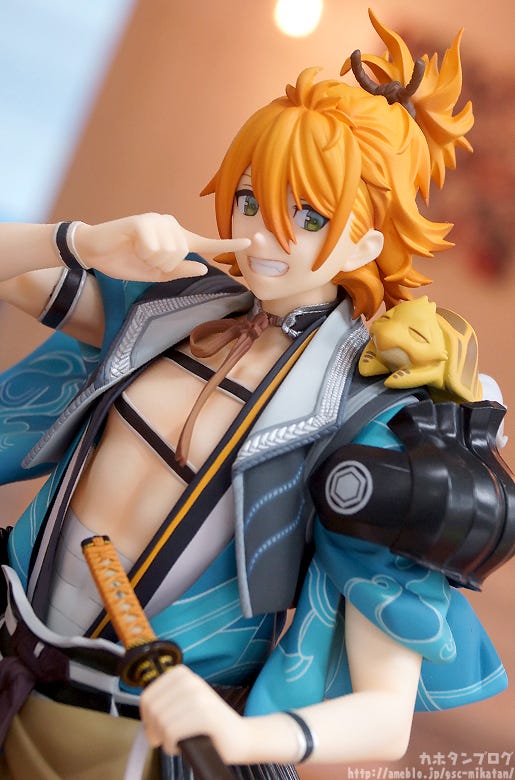 I just realized we are already in August! I have hardly done anything Summer-like this Summer except maybe eating some shaved ice! I can’t believe how much time flies!

Anyway, today I’m going to be taking a look at an item that will be up for preorder from tomorrow, the 1/8th scale figure… From the popular browser and smartphone game “Touken Ranbu -ONLINE-” comes a 1/8th scale figure of Urashima Kotetsu based on his standard standing illustration from the game!
His spirited smile, the intricate wave patterns on his kimono, his tied up bright orange hair and the rigid armor that covers various parts of his body have all been captured as faithfully as possible for fans to enjoy Urashima Kotetsu by their side. Be sure to add him to your collection!

The wakizashi, Urashima Kotetsu is joining the Touken Ranbu 1/8th scale figure series! The figure is based on his standard pose from the game and captures his spirited personality so perfectly in figure form! (*´꒳`*)

His bright orange hair has been sculpted in amazing detail! The flowing look of his outfit and the glossy and heavy look of the armor contrast really nicely, with the difference in textures captured with different paints!

The area around his belly button is filled with so much details, just look at all the different textures and colors around that area! (´□｀｡) ▲ The brown cord even has the vertical lines from the original design!

Plus just look at his innocent smile! Also note that his abs and upper arm are all sculpted with a powerful look you would expect of a Touken Danshi!

Plus if you look from a lower angle… You can see the way his outfit has been sculpted around the appearance of his tones abs with the ups and downs of the sculpt! Details like this never cease to amaze me!!

Plus, speaking of details… Look at the intricate pattern on the collar area of his outfit!!!

Most people will probably look at the adorable Kamekichi on his shoulder first, but when you look even close and realise that this pattern is actually sculpted onto the figure… that’s when you realize how absolutely amazing the detail is on this figure! Taking a peek from a lower angle allows you to see that even the bow underneath his outfit has been sculpted to keep the realism of the figure as best as possible!

Enjoy his amazingly detailed outfit and playful personality with the figure by your side!!

*Due to an error discovered on the prototype, preorders are opening a day later than previously announced.