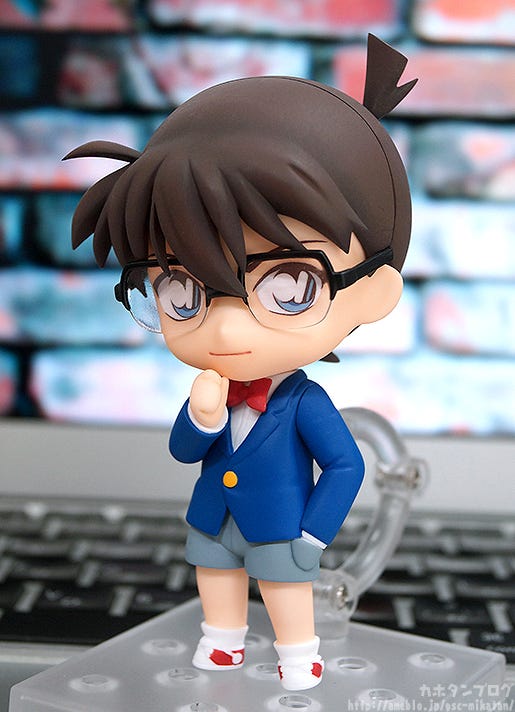 Today I’m going to be taking a look at…
Nendoroid Conan Edogawa! From the popular anime series “Detective Conan” comes a Nendoroid of the main character, Conan Edogawa! He comes with three face plates including a confident standard expression, a serious expression for when he is closing in on the criminal as well as a dumbfounded expression for when those around him can’t quite keep up. The Nendoroid comes complete with his turbo engine skateboard and voice-changing bowtie to allow fans to display him solving all sorts of cases!

“Only one truth prevails!”

From the series that has continued for many years and accumulated fans of all ages, “Detective Conan” comes a Nendoroid of the detective with the body of a child but the brain of an adult – Conan Edogawa! ▲ The little bit of hair sticking out at his neck is also included!

By the way, his glasses can also be removed for a different appearance! ☆ ▲ You can enjoy this rather rare look whenever you like with the Nendoroid!♪

Of course the Nendoroid also comes with a selection of his detective tools, including the classic voice-changing bowtie! ε=(｡・д・｡) Along with the standard version on his outfit, a slightly larger version is also included allowing you to display him holding and making use of the device! He also comes with bent leg parts to display him kneeling down as he hides to reveal his theory with someone else’s voice! (/・ω＼)

He comes with a total of three face plates, the first of which is the standard expression above, and the second is of course… “Only one truth prevails!“

A serious expression to capture his famous line as he points out the truth!!! The sharp looking gaze matches up with his pointing hand and shouting mouth to easily display him as if he was pointing out the criminal!ヽ(●´Д｀●)ﾉ

He also comes with his turbo engine skateboard which he can even ride! Together with this expression it makes it look like Conan is chasing after the criminal! ▲ The theme song for the series played through my head while watching this! A special bent leg part is included in order to display him putting force into riding the skateboard as fast of possible! ♪

In other words, even in Nendoroid size you can enjoy a cool action pose as Conan dashes off on his turbo engine skateboard! The perfect expression to show Conan’s personality when those around him can’t quite keep up! This expression will make it so easy to create all sorts of stories in figure form!!

The expression also works well with the voice-changing bowtie! ▲ I’m fairly certain I’ve seen this scene in the anime many times! ♡

I was actually the head planner for this Nendoroid, and as it was a figure from a series that I have been enjoying ever since primary school it felt very special to work on it!! I hope everyone enjoys him in their collection as much as I enjoyed working on him!! Keep your eyes on the Good Smile Company website for details! Please do note however that the product will not be available in all regions due to licensing issues.

In addition, certain stores will also include preorder bonuses! ♪ Speech Bubble & Stand: “Only a single truth… will ever prevail…” (Japanese Text) A little extra part to bring out the spirit of the manga! ☆

Also, don’t forget that there are many more Nendoroids from the series on the way including Nendoroid Heiji Hattori, Nendoroid Shuichi Akai and Nendoroid Tooru Amuro! Look forward to them! ☆ These items are all planned to be on display this weekend at Wonder Festival!! See below for more information, and stay tuned for updates!!! ヽ(*´Д｀*)ﾉ