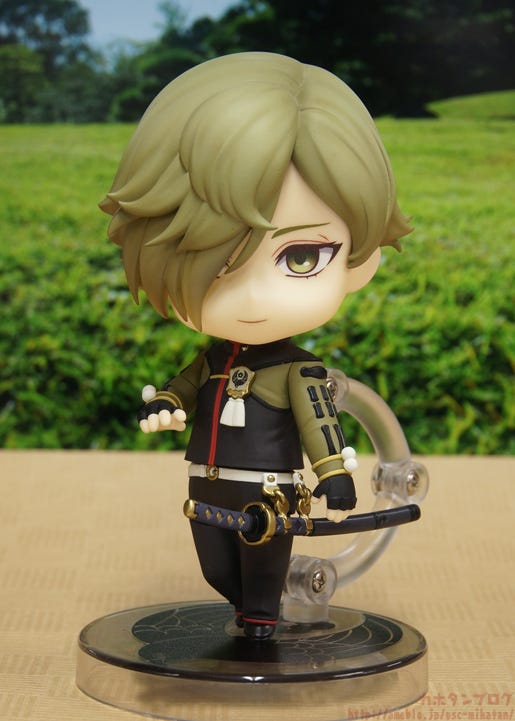 Today I’m going to be taking a look at this item currently up for preorder…
Nendoroid Uguisumaru! From the popular browser and smartphone game ‘Touken Ranbu -ONLINE-‘ comes a Nendoroid of the Bizen sword, Uguisumaru! He comes with three face plates including a standard face, a combat face as well as a smiling expression based on his “sometimes it’s good to take it easy” line from the game.

His sword can be displayed both sheathed or drawn allowing you to recreate various scenes from the game, and he also comes with parts that were seen in the 1st anniversary celebration illustration. Be sure to add him to your collection!

“Okanehira thinks too much of the ‘Five Great Swords’ title.”

A Nendoroid of the the Bizen sword, Uguisumaru and the 19th Nendoroid to join the Touken Ranbu series!! We’re almost at the big number 20! You may notice that the hair over his right eye actually makes use of slightly translucent parts! It’s a little hard to see in the light, but if we darken the room and shine a light on him… You can see the bottom of the hair has a slightly see-through look to it and you can just make out the skin color beneath the hair! This is in order to capture the original illustration as faithfully as possible!

▼ Next a look at his outfit! The green bracer and mostly black outfit give him a very stylish look! The white belt also creates a lovely contrast! The crest on his chest is rather tiny but still has such amazing detail!

▼A look from the back! Uguisumaru’s iconic spiky hair looks great from the back as well, with each of the tufts of hair carefully sculpted and positioned! This was actually one of the most difficult parts to get right on the Nendoroid! (´∀｀；) The sword is sheathed on his hips and includes semi-glossy gold parts which add a nice touch to the black and matches with his outfit nicely! ♪

▼ Switch to a Combat Pose! He comes with a combat expression with clenched teeth and a sharp gaze, and he can also be posed with his sword drawn and held in his left hand! ♪ Here I attempted to pose him in the moment before he switches from single-handed to two-handed wielding! From this angle you can see that his right eye is actually closed for this expression! Even though it is covered by his hair the entire expression is always faithfully included! (๑•̀ㅂ•́)و✧ The Nendoroid even comes with a tray including tea and some Japanese-style snacks! This pose is based on an the 1st anniversary celebration illustration!! This is the same as all the previous Touken Ranbu Nendoroids, making them look great when displayed together!

Nendoroid Uguisumaru is currently up for preorder!

In addition, preorders from the GOODSMILE ONLINE SHOP will also include this bonus! Plus, we have also made a Nendoroid Pouch: Sleeping Bag (Uguisumaru Ver.) which can be purchased together with him!