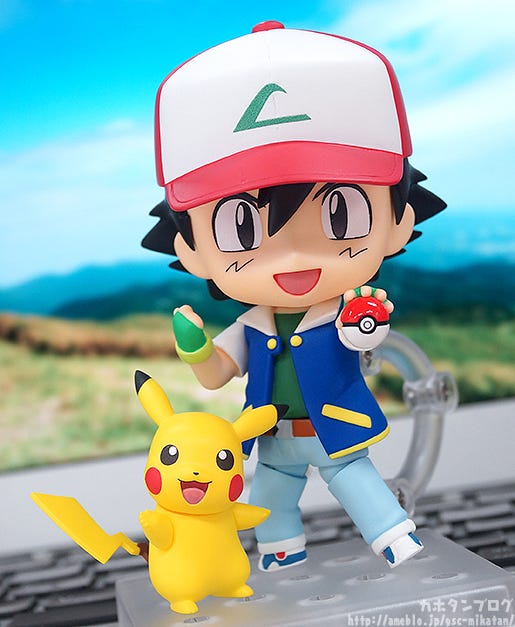 The very first Mini CD I ever purchased was “To Be A Pokemon Master”. If I remember correctly the CD was made to look like a Poké Ball!

Anyway, today I’m going to be taking a look at…
Nendoroid Ash & Pikachu! From the popular anime series celebrating its 20th anniversary with a new movie, “Pokémon”, comes a Nendoroid of Ash Ketchum together with Pikachu! He has been sculpted in his original outfit from the beginning series, and comes with three different face plates including a smiling face, a more serious expression for Pokémon battles as well as a gentle smiling expression with closed eyes perfect for showing his close relationship with Pikachu!

His iconic hat can be worn both forward and backward with any of the face plates for all sorts of different display options. Pikachu also comes with both a standard face as well as a battle face allowing for various different scenes. Optional parts include a Poké Ball as well as lightning effect parts for Pikachu’s attacks. Enjoy the adorable Ash and Pikachu in your collection!

“Pikachu, I choose you!”

Apologies for the long wait since their announcement! The main character of the Pokémon series, “Ash”, is joining the Nendoroid series together with his first Pokémon, Pikachu! ★ His arms and tail are both fitted with a ball joint allowing them to moved into various different angles! As you can see he also has a hole on his back which allows a stand to be attached for jumping poses together with Ash! ☆ Although they might be best buddies now, back when they first met that wasn’t quite the case! In order to recreate scenes like this Pikachu comes with electric effect parts which can be placed around Ash to make it look like he has been electricity!

In addition, Pikachu also comes with a battle face plate which can be used above as a bit of an angry expression, or can instead be used with Ash’s battle expression in order to pose the two of them ready for their next challenge! (‘-‘*)(,_,*)(‘-‘*)(,_,*)

▲ They look perfectly in sync and ready for battle! ♪ He can wear his cap backward and be posed about to throw a Poké Ball!! The cap can be completed turned around and he also comes with an alternate front hair part to better suit the cap backward! Anyone who has seen the series will remember the scene where he spins his cap around making this a lovely nostalgic item!★

He also comes with a third face plate which is ideal for displaying him playing around with Pikachu – a gentle expression with closed eyes! Using the included stand you can also pose Ash carrying Pikachu in his arms like above! The way their cheeks are just about touching shows just how close they two are!! This brings back so many memories! ♡

This Nendoroid Ash & Pikachu will be the commemorative Nendoroid No. 800!! It’s lovely to have such a world renown series as Nendoroid #800!!

Be sure to catch one for your collection!
Nendoroid Ash & Pikachu!

They’ll be up for preorder from tomorrow!★

Plus this product will also be going up for preorder! This case will hold two spare Nendoroid face plates and also have a cute look in your collection!! This is what it looks like if you put Ash’s closed eyes expression inside! (●‘∀‘●)ﾉ” Be sure to consider it together with Nendoroid Ash & Pikachu!

Also don’t forget that Nendoroid Lillie is currently up for preorder too!