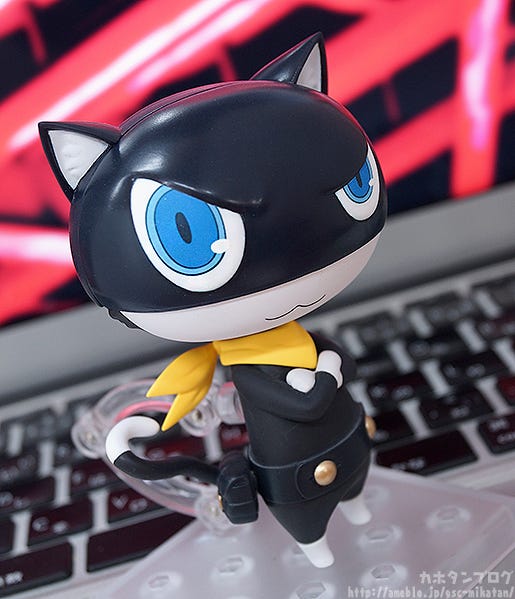 Today I’m going to be taking a look at the highly anticipated…
Nendoroid Morgana! From the popular game “Persona 5” comes a Nendoroid of the Phantom Thieves’ feline mascot, Morgana! His unique design has been captured in Nendoroid size as faithfully as possible, and his eye and mouth parts are separately interchangeable and each come with four different options for a total of sixteen different combinations. You can enjoy everything from his cuter side to combat scenes all with the single figure!

The lower body of the Nendoroid not only captures Morgana’s design faithfully, but also includes a joint covered with flexible parts to completely cover up the joint for a seamless appearance that can still easily be moved around. Optional accessories include a slingshot and saber to recreate battle scenes, as well as parts to pose him in the finish pose of his “All-Out Attack” illustration. Enjoy all sorts of different sides of Morgana in your collection!

From ATLUS’s popular RPG game “Persona 5” comes an adorable Nendoroid of the strange, cat-like creature that the protagonist and Ryuji saved from a Palace in the Metaverse – Morgana!

Due to his unique shape, the design differs quite a lot to standard Nendoroids! Morgana comes with separate eye parts and mouth parts that can be used in any combination! There are a total of four of each, meaning there are 16 different expressions to enjoy!

You can just imagine some of the combinations, for instance this rather iconic expression from the start of his “All-Out Attack”! Or instead some original creations to create your very own Morgana! ▲ A surprised look when I turned the camera at him! ☆

The photos you see here are a painted prototype, but the prototype is in fact not quite complete just yet! The final version will include a joint in the lower body that will be covered up with a flexible ‘skin’ that will keep it looking seamless and natural while still allowing for all sorts of different nuances when posing!! ヽ(ﾟ∀ﾟヽ 三 ﾉﾟ∀ﾟ)ﾉ It’s so nice to know he’ll keep his round looking form yet also be able to posed in various ways! The yellow scarf around his neck also has a joint included at the tied-up part allowing you to alter the angle to best suit your poses! (｡･ω･)ﾉﾞ ▲ From surprised to looking cool and composed!

Anyway, let’s take a look at the other parts he comes with! ☆ ▲ A little peek at his cute pink paws too!

In other words he comes with both a long and short-ranged weapon to choose from! They can of course be used to pose him based on the combat scenes in the game, but can also be used for original poses as well! ★ ▲ Just swapping out the eyes makes for such a different feel!

Last but not least he comes with one more rather special part!

He comes with both a chair and a cigar in order to recreate the final pose at the end of the “All-Out Attack” scene from the game! An alternate sitting body us also included to easily place him in the sitting pose! ♪ ▲ The shiny leather-like look of the chair captured so nicely!

Keep your eyes on the Good Smile Company Website tomorrow for more details!