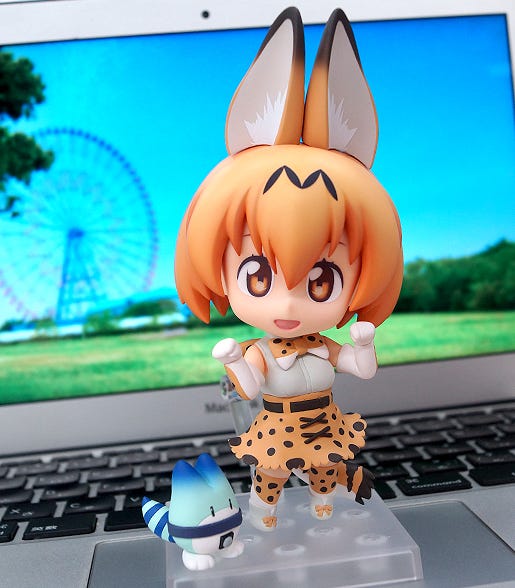 I have recently been watching cute animal videos to wind down and relax. I love the one with the raccoon trying to clean his candy floss!

Anyway, today I’m going to be taking a look at…
Nendoroid Serval! From the popular anime series “Kemono Friends” comes a Nendoroid of the serval cat, Serval! She comes with three face plates including a cheerful smile, a boasting expression as well as a shouting face for her to let her friends know that she won’t eat them!

Optional parts include a lined background sheet for more zealous poses, as well as the “Boss” also known as Lucky Beast who is included to display by her side! Enjoy recreating all sorts of fun and amazing poses from Kemono Friends by adding the big-eared Serval-chan to your collection!

“We’re friends now, so next time we meet call me Serval-chan!”

From the anime series that became a huge hit “Kemono Friends” comes a Nendoroid of the Serval-chan the serval cat! Some of you may remember that we started preorders for her while she was still an unpainted prototype, but now she is fully painted and still up for preorder so be sure to take another look!ヽ(*´∀｀)ノ

Her lovely big ears, tight waist, spotted skirt, tail and more have all been adorably converted into Nendoroid size! ★ The impressive volume at the back of her hair has also been preserved on the Nendoroid! The entire design is a little different to most Nendoroids and focuses on sticking to the appearance from the anime series! ▲ Even the spotted ribbon on the back is faithfully included!

“This is Japari Park! I’m Serval!“ She comes with a couple of interchangeable arm parts which allow to place her in various memorable poses from the series!

Along with the cheerful face above she comes with two other face plates to enjoy! The first of which is this one! The proud expression she has when showing Kaban-chan around the Savanna area! The sharp eyes and eyebrows make her look all serious which somehow just makes Serval-chan look cuter! ♥

She also comes with thumbs-up parts allowing you to recreate the “It’s a race to see who will get there first” scene! (๑• ̀д•́ ) ▲ You have to imagine the cliff behind her!

Moving onto her third face plate which is a shouting expression! (∩・∀・)∩ This expression can be used together with the special lined background sheet to really get Serval-chan’s point across! A special attachment part is included to place the sheet behind her like above, which also of course means you can use it with other characters as well! His tail can even be wagged left and right allowing for slightly different nuances! His cute fluffy form has been painted with a lovely gradient effect! (´□｀｡) ▲ I can just imagine the sound of his cute footsteps!

Plus Nendoroid Kaban has also been announced! I can’t wait to display her together with Serval-chan and Lucky! Stay tuned for updates! (/ω＼)

In the meantime, be sure to add the Serval Cat Friend to your collection! Orders from the GOODSMILE ONLINE SHOP are open until the 18th May 2017 (Thu) at 12:00JST and will also comes with a Japariman & Hand Parts as a bonus! ☆ In addition to Nendoroid Serval, these friendly goods are also up for preorder at the moment! The GOODSMILE ONLINE SHOP preorder deadlines are coming up fast, so don’t miss out!