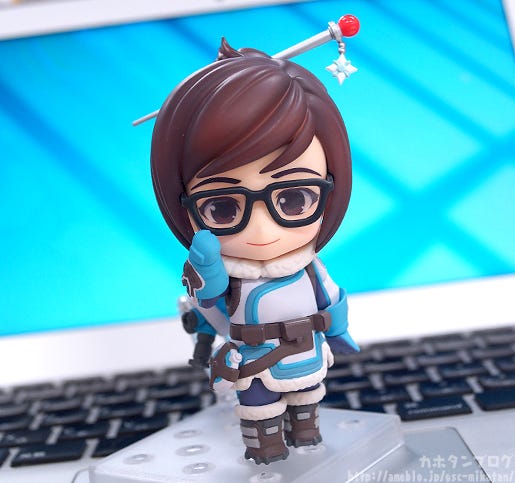 I recently purchased a fluffy cushion and I couldn’t be happier with my choice! Everyone should own at least one soft, round cushion!! From the globally popular multiplayer first-person shooter, Overwatch®, comes the second Nendoroid figure from the series – Mei! The Nendoroid comes complete with two different face plates as well as various effects for her abilities to recreate iconic poses from the game!

Mei’s Endothermic Blaster comes with attachable effect parts to display her firing a stream of frost to freeze her enemies! The weather-modification drone stored on the cylinder on her back can be detached and comes with its own stand to display by Mei’s side, as well as a circular effect sheet to display Mei activating her “Blizzard” ultimate ability!

The Nendoroid is fully articulated, allowing her to be posed in many different ways, and has been carefully sculpted and tuned to ensure that the joints do not stand out, keeping Mei’s unique appearance intact. Be sure to add this a-Mei-zing Nendoroid to your collection!

“Our world is worth fighting for.”

The second Nendoroid from the globally popular multiplayer first-person shooter, Overwatch®, is none other than the peerless climatologist – Mei!!

The first in the series was of course none other than Tracer! ♪ Nendoroid Tracer is still available for preorder from the GOODSMILE ONLINE SHOP. but orders close on the 20th April 2017 at 12:00JST, so make sure you don’t miss out! If you order now you can grab her together with Mei and save on shipping! ♪ Even in Nendoroid size her lovely fluffy outfit has been sculpted in intricate detail! ★ ▲The cute designs on her arm and gloves are also included!

Her Endothermic Blaster has also been shrunk down into chibi size to suit the Nendoroid design! ♪ Perhaps my best thing about the Nendoroid is that the weather-modification drone, “Snowball”, normally stored on the cylinder on her back can be removed and even comes with its own little stand to display floating beside her! This allows you to recreate the “Companion” Emote from the game! (ﾟ∀ﾟヽ 三 ﾉﾟ∀ﾟ)ﾉ

In addition, effect parts are included that attach to the endothermic blaster to pose her firing a stream of frost to freeze her opponents! Brrr… In addition, she also comes with this second face plate! ♥ As the figure is fully articulated you can also place her hands in the position above to recreate the Yaaaaaaaaay! emote from the game!!

This expression while facing Snowball makes it look like the two of them are having a little conversation! So cute! ♪ ▲The cute expression makes me want to grab her little cheeks! (｡･ω･)ﾉﾞ

As a side note, her glasses can also be removed for some additional fun posing options!  Simply display her how ever you prefer! ♥ ▲ Mei without her glasses! Quite a fresh look for her!

Be sure to add the a-mei-zing climatologist to your collection!
Nendoroid Mei: Classic Skin Edition! Preorders from the GOODSMILE ONLINE SHOP are open until the 18th May 2017 at 12:00JST! You can also find her at the Blizzard Gear website as well as our official partner shops!

Last but not least, we also made a little introductory video to show Mei from various different angles, so be sure to take a look! (●‘∀‘●)ﾉ”