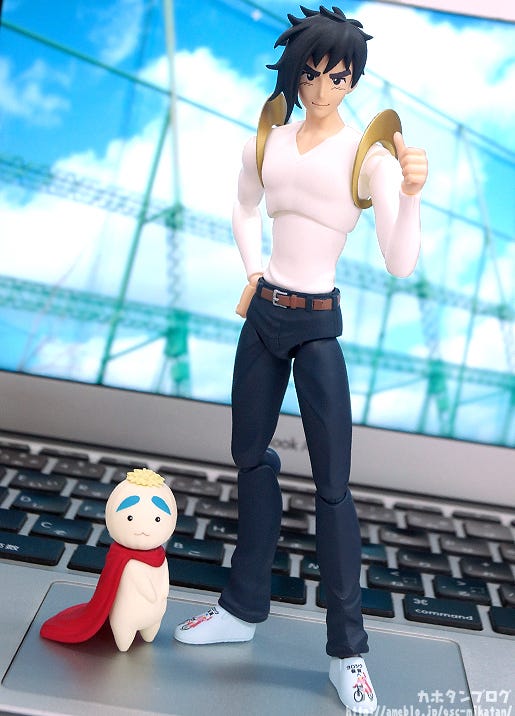 Today I’m going to be taking a look at WING’s latest figma product! From the masterpiece comedy manga ‘Sexy Commando Gaiden: Sugoi yo!! Masaru-san’ comes a figma of the head of the Sexy Commando Club at Wakame High – Masaru Hananakajima! ♪ His collarbone and abs have also been carefully sculpted allowing fans to enjoy his sexy, fit body whenever they please with the figma!

The golden circles on his shoulders have also been nicely sculpted. together with his tight tucked-in shirt! But perhaps the most impressive detail is put into the print on the shoes!! But the figma aims to recreate more than just Masaru-san’s appearance! He comes with special articulation to recreate all sorts of scenes from the series!! For example… Bumping into someone’s shoulder at a 30° angle makes for the elegant yet jaunty ‘WANT YOU’ move! ヽ(ﾟ∀ﾟヽ 三 ﾉﾟ∀ﾟ)ﾉ

The playful winking expression just adds to the effect! You can’t be angry with that face!

I am using the figma archetype next:he GSC 15th anniversary color ver. as an example here, but you can of course recreate all sorts of WANT YOU scenes with your own figma collection! I look forward to seeing the photos! The pose that how off the impulsive yet empty feeling of youth can also be recreated!!

A special alternate hair part is also included to complete this trendy pose! The alternate hair also looks quite nice from the front which you can see here! ▲ It’s so quick and easy to make poses with the figma series! ♪

Ah! As you probably noticed in the photo above, the figma also comes with the mascot-like character from the series – Meso! (*´ｪ`*) ▲ The surface has little bumps to recreate his fluffy appearance! ▲ The writing on the back of his cape is also included!
Plus the neck can move left and right for different poses! There is a zipper!! A really detailed zipper!

He looks so soft and adorable and even comes with such amazing detail to boot!! But there is still more to enjoy with this figure… To think you can recreate the open zipper pose with a figma!! Not to mention the glowing eyes and the shouting mouth to complete the completely indescribable scene!! (°Д°；≡°Д°；)

The above can be done by making use of this interchangeable pants part! ♪ The parts are all made with a soft, flexible plastic which still ensures that you can easily pose him in all sorts of different ways! You will need to remove his legs to swap out this part though! ★ The image from the very first photo! Those who do not know the series may be slightly confused, but this isn’t what you think it is!! This is to recreate the scene where Masaru-san shakes a bottle and them opens it up with his back turned like above!! ★

Here we have the bottle with the splash parts! ♪ ▲ The sculpt shows off the impressive force!!

Here we have Masaru with the symbol mark from the series! I drew it myself!! (∩・∀・)∩ ▲ I tried my best to copy the original!

If you’re wondering how I got him to hold the paper up, I made use of the opened out fingers used for the trendy pose and folding the top of the paper around this thumbs!! I think it worked out quite nicely! ▲ This is how it looks from the side!

The amount of poses you can make are only limited by your imagination! Be sure to add the charming Masaru-san to your collection!! He is currently up for preorder!!