Megumi Kato (Saekano: How to Raise a Boring Girlfriend) 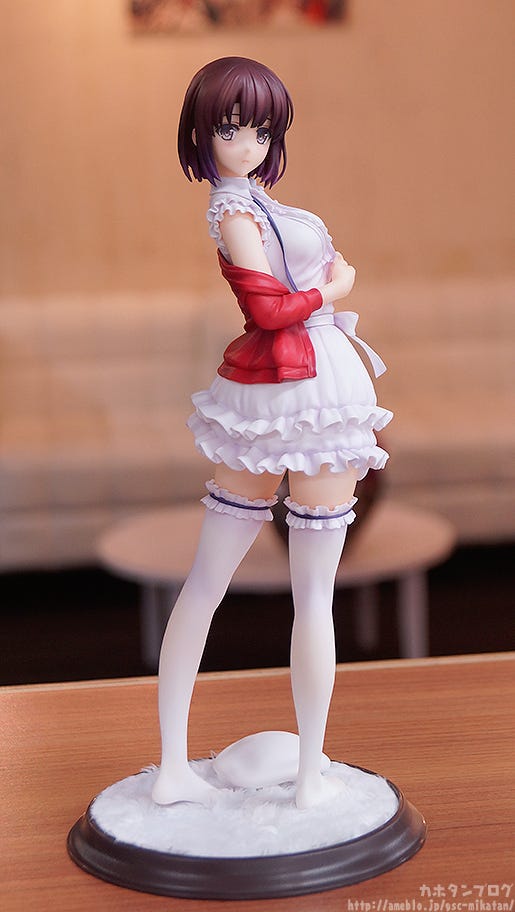 From the anime series ‘Saekano: How to Raise a Boring Girlfriend’ comes a 1/7th scale figure of the main heroine who doesn’t get noticed much – Megumi Kato! Following on from the previously released Utaha Kasumigaoka and Eriri Spencer Sawamura, this figure is based on an illustration by Kurehito Misaki, the original character designer of the series!

Just like the previous figures, Megumi is posed in the middle of getting dressed with her appearance from the original illustration faithfully preserved with an intricate touch and careful painting. The figure also includes Megumi’s beret, which can be worn or removed whenever you feel like a change! The figure allows you to enjoy all the angles that were never visible on the original illustration, so be sure to add her to your collection and enjoy every inch of the figure as she stands by your side!

“Make me a heroine that everyone else envies, okay?”

From the popular anime series ‘Saekano: How to Raise a Boring Girlfriend’ which has a second season called starting next April comes a figure of the heroine who is better than most at staying under the radar – Megumi Kato is becoming a lovely 1/7th scale figure! ♪

The white one-piece and half-removed red cardigan… feet with her shoes removed and lovely long over-knee socks with cute frills on the top! Not to mention the frilly shirt that makes her look so much sweeter when compared to her normal school uniform!

Plus this innocent expression that looks like she has been taken by surprise! The blush on her cheeks as well as the pose with her mouth slightly open really makes me want to stand up and protect her from anything that might be out to harm her!!

The gradient used down toward the tips of her hair has also been beautifully applied to match the soft looking sculpt of the hair which all comes together to make her hair look so light and silky!

Let’s take a look from the back! ☆ This is actually the third in a series of figures from Saekano that all have the theme of ‘getting dressed‘!  (∩・∀・)∩ Just like the past two figures, this figure of Megumi captures that moment that you happened to take a peek at her getting changed!! The material of the one-piece that was held tight by the buttons is clearly loosened by the open buttons with a slack appearance and creases that capture the motion of the outfit so amazingly!!! It’s such a pleasure to look at!!

This angle was also never quite visible from the original illustration which makes it all the more enjoyable!! You’ll have to wait till she joins your collection to get an even better view! ♪ ▲ This angle makes her look so young and innocent! ♪

Another point to note are her toes!! It might be a little hard to tell from the photos, but the area around her toes has an ever so slight skin-color to the paintwork which creates a slightly see-through appearance as the fabric stretches!

That same fabric also has beautiful sculpts and shadows around the knees and the back of the knees that bring out the shape and curves of her legs so brilliantly!  ε=(｡・д・｡) ▲Just the right amount of sensuality!

Plus you may have also noticed the beret that was lying at her feet in some of the photos above… which can actually be worn on her head as well for a slightly different feel! The twisted body and the curves that become so much more clear thanks to that twist… looking from this angle shows the chest ribbon undone but doesn’t quite show the chest area… but that just allows you to focus more on the captivating bare skin that peeks out at her upper arm as well as between her dress and socks! (´□｀。)

Plus just like the previous figures in the series she also comes with a Original Illustration Postcard (Illustrated by: Kurehito Misaki)! ♥ ▲ Included no matter where you choose to purchase! ♪

Be sure to add the boring girlfriend to your collection! The 1/7th scale…

Keep your eyes on the Good Smile Company Official Website for more details!

Quite a few products have preorders closing later today!! (´□｀｡) There are also a number of items with GOODSMILE ONLINE SHOP Exclusive Bonuses, so be sure you don’t miss out!