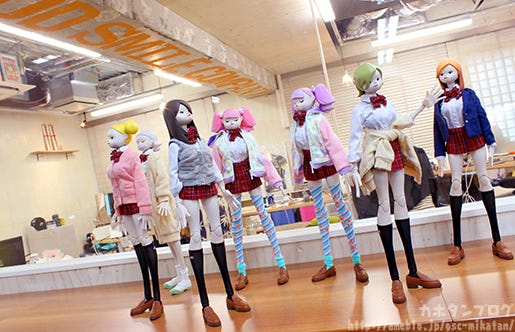 Hi everyone! Suwabe (@gsc_suwabe)  from the Corporate Planning Division here! A collaboration product between Ashley Wood’s female figure series ‘THE WORLD OF ISOBELLE PASCHA’ and Torajiro Kishi’s manga series ‘Otome Teikoku’! Six more high school girls are being released in Isobelle Pascha style! Each figure is 1/6 scale and stands approximately 31cm in height and is fully articulated. The uniforms are made from real fabric and come complete with a full set of underwear to wear beneath the uniforms or to display separately for a more sexy appearance!

Seven cute girls from threeA’s THE WORLD OF ISOBELLE PASCHA made in collaboration with the manga ‘Otome no Teikoku’ for a lovely collection!! Let’s take a closer look at each of them! ♪ Mahiro and Mahiro are twins that always wear the same clothes. Mahiro has purple hair while Mahiru has pink hair! The uniform, cute hoodie and socks are all made from fabric for a lovely appearance! Chie’s characteristic blond hair has been recreated with a lovely yellow color, and the cute tailed eyelashes look lovely! ♡ Both the color and style of Ai’s hair really make her look special! The cardigan tied around her hips also gives her a stylish touch, but it can also be worn, or just placed over her shoulders… simply choose how you would like to see her!! (੭ु´･ω･`)੭ु⁾⁾ Miyoshi is the only one of the Otome no Teikoku characters that includes a blazer! You can also have the other characters wear the blazer instead though! (*’▽’) Ayano has a rather simple hairstyle making her a nice addition to home decorations that doesn’t stand out too much!!

Last but not least. we have this GOODSMILE ONLINE SHOP Exclusive… which will no longer be available once sold out! A collaboration product between Ashley Wood’s female figure series ‘THE WORLD OF ISOBELLE PASCHA’ and Torajiro Kishi’s manga series ‘Otome Teikoku’! High school girls are being released in Isobelle Pascha style! The first in the series is ‘Mask Senpai’, which will be sold as a Wonder Festival 2016 (Summer) Exclusive!

She is a third year student in the manga research club and loves BL manga set in the past. She writes her own manga under the pen name Yokoyama Bozaemon where she lets her mind run free! (Otome no Teikoku is currently serialized on Shueisha Grand Jump WEB! http://grandjump.shueisha.co.jp/ )

The figure is 1/6 scale, stands approximately 32cm in height and is fully articulated. Her outfit is made from real fabric and the characteristic mask and over-sized cardigan have both been faithfully included on the figure. A manga book (printed on paper) and a spare mask wrapped in vinyl are included in the same scale.

Mask Senpai’s unique hairstyle has been faithfully preserved, and the mask she wears is actually made from gauze!  The stylish long knitwear also gives her a rather different impression when compared to the other 6 girls above! It’s lovely to display them together and compare the difference in their traits and appearance that have been captured so nicely in Ashley Wood taste! ♥

You can see many more photos of each of the characters on their official product pages, so be sure to take a look if you’re interested!! I’m going to give three points that I personally really like about the series! Just placing them around without worrying too much about the posing makes for a rather lovely atmosphere!! ♪ The clothes and underwear are all made from actual fabric and can be worn, removed and swapped around whenever you like!! You can even make slightly sexy poses showing off a peek at the underwear like above! A low angle like this gives a nice little peek at the panties, but the mechanical look of the arms and legs creates quite a peculiar contrast with the cute underwear! A bonus shot of Mask Senpai in her underwear!

There were no photos of Mask Senpai undressed on the product page, so I decided I had to add one to the blog!!

Currently Up For Preorder!

Orders in Japan can be made at the GOODSMILE ONLINE SHOP until the 5th October 2016! Mask Senpai is also available from the international store, but orders will close as soon as stock is sold out!