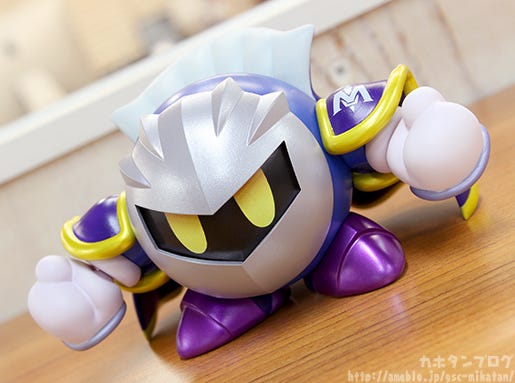 Hi everyone! Suwabe (@gsc_suwabe)  from the Corporate Planning Division here! I love round things, which is to be expected as the human mind apparently is attracted to anything symmetrical!

From the popular ‘Kirby’ game series comes a Nendoroid of Meta Knight! Just like the previously released Nendoroid Kirby, Meta Knight makes use of magnets for posing, making his movements smooth and easy to place in all sorts of different positions!

He also comes with a selection of optional parts including his sword together with large effect parts to display him slashing with the sword. You can also display him wearing his cape as well as transformed into his flying version with interchangeable wing parts! He even comes with parts that allow you to change the direction he is looking allowing for all sorts of awesome Meta Knight poses!

I’ve been waiting for this one!!

Following on from the previously released Nendoroid Kirby comes a similar Nendoroid of his rival – Meta Knight! While the design still has that cute Nendoroid appeal it also makes use of magnets just like Kirby which allow for all sorts of different posing opportunities!

Almost everyone in the offices as well as myself have absolutely loved Nendoroid Kirby, so getting another Nendoroid that makes use of the amazing magnet attachments makes me so happy!!

▲ Nendoroid Meta Night will also move with magnets like this!

There is currently a Kirby cafe being run which also makes use of Nendoroid Kirby!! The one in Tokyo starts tomorrow at Solamachi! I definitely need to go visit! The design is quite different to normal Nendoroids, so there are a few frequently asked questions I want to clear up for fans of Meta Knight and Nendoroids! (｀･ω･´)

★How do you change the way he is looking?

The silver mask can be removed and then you simply need to replace the V-shaped eye parts! There are three different variations to match with your pose – one looking straight, one to the left and one to the right!

★Are the back accessories also magnets? It wouldn’t be Meta Knight without his cape and wing parts! These parts however are not magnets, but instead simply attachable parts! The wings are in fact Nendoroid joins which allow you to pose him flying through the air and have the wings at various different angles!

▲ As a GIF it really looks like he is flapping his wings!

He also of course comes with a Nendoroid stand which means you can display the actual figure floating in the air as well as in various other poses!

★ How does he hold the sword? Nendoroid Meta Knight’s hand parts can be swapped out at his shoulder armor. You simply need to switch to the right hand and then insert the sword into his hand! ▲I didn’t mean for them to fight, but it looks like they are!

★How do you make the effect parts look good? The effect parts attach to the sword to make more a more epic, dynamic pose! The problem is that the weight of the effect parts makes posing quite difficult… but that is why the effect parts come with their own little stand to hold it up allowing for an amazing battle scene! ▲ Displayed with Kirby and his fire effect parts! (੭ु´･ω･`)੭ु⁾⁾

I enjoyed Kirby’s photos so much, so I can’t wait to see everyone’s photos once Meta Knight is released! (*´ω`*)
Nendoroid Meta Knight! He is up for preorder from today!