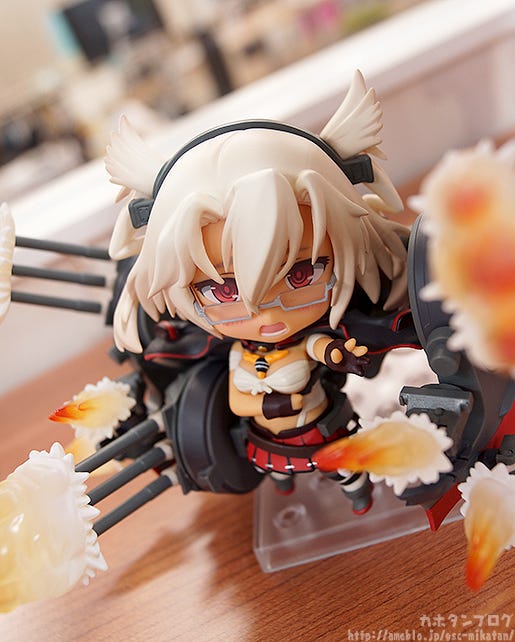 One day I want to eat box of castella cakes as a full single cake! Ever since I saw it in an anime it’s been a little dream of mine…

But anyway, today I’m going to be taking a look at…!
Nendoroid Musashi! From the popular browser game ‘Kantai Collection -KanColle-‘ comes a Nendoroid of the second Yamato-class battleship, Musashi! She comes with three face plates including her gallant standard expression, an embarrassed expression and a half-damaged expression.

Just like Nendoroid Yamato, her ship parts are attached with Nendoroid joints which allow them to be opened out. A smaller 46cm triple gun mount that attaches to her hips as well as two huge turrets that connect onto the main ship parts are included. Each turret also comes complete with effect parts which means you can pose her firing all her weapons in an all out attack!

A castella cake and sara udon are included as the usual KanColle food parts, and she also comes with parts that allow you to switch her into ‘Musashi Kai’ form! A special hand part for holding hands with the previously released Nendoroid Yamato is even included for some joint poses! Enjoy all sorts of situations with the huge selection of parts included with Nendoroid Musashi!

This product will only be sold at events as well as the GOODSMILE ONLINE SHOP.

“It would seem that I’ve kept you waiting.”

The darker skin with contrasting white hair, impressive bosom wrapped up tight and the deep red eyes with thin glasses… everything about the battleship has been faithfully included on Nendoroid Musashi! ♥

The ship parts on her hips also have amazing detail and the amount they can be moved around is absolutely amazing! Plus, she comes with a huge selection of parts that even rivals the amount included with Nendoroid Yamato! Σ(･ω･ﾉ)ﾉ! ▲ Just look at all the parts in the packaging! ♪

▲ Musashi, Yamato, Nagato and Mutsu in a similar pose to the 2nd Kanakanshiki event image! ☆

Plus in order to recreate the holding hand scene that can be seen on the sleeve, Musashi comes with holding hand parts to be used together with Nendoroid Yamato! ヽ(*・ω・)人(・ω・*)ノ They look so perfect for each other in cute Nendoroid size! ♡
(*Nendoroid Yamato is sold separately!) The combination of the blushing cheeks and the fact that she is kind of averting her gaze still keeps her cool appearance but has a very different feeling to the previous expression! The pose here is very similar to that of the first photo of the blog, but the change in expression gives it such a different atmosphere! (੭ु ›ω‹ )੭ु⁾⁾ Where did that cool and composed Musashi disappear to?! Her eyes suddenly look like they are about to burst into tears, and I can’t help but want to jump in and save her from anything that might be trying to attack her!

She also comes with a huge selection of turret effect parts, so you can display her going all out! ★ “These turrets aren’t just for show!”

As you may have noticed, she comes with both the smaller 46cm turrets to connect on her hips as well as versions the same size as the ones on her back turrets!

All of the turrets come with effect parts which means you can really pose her showing off her fire power!! ☆ Plus as with all the previous Nendoroids in the KanColle series she also of course comes with certain food parts!♪

Musashi comes with sara udon and a castella cake! ♥ The combination of the food parts together with the embarrassed expression is just too perfect!! It allows you to experience the more every day side of Musashi! ♪ Her outfit changes from a red outfit to a stylish black version, and this part on the back of the ship parts gets upgraded!

The turrets on the sides are also upgraded! “Does this look suit me as well?” Oh, I almost forgot! The cute little ear-like tufts of hair are made to move around slightly so you can pose them blowing around for various different nuances! ☆ Purchase methods are as follows! (｡･ω･)ﾉﾞ

■ GOODSMILE ONLINE SHOP
Limited sales from the 8th August 2016~
Stock is limited. Sales will close when stock has been depleted.