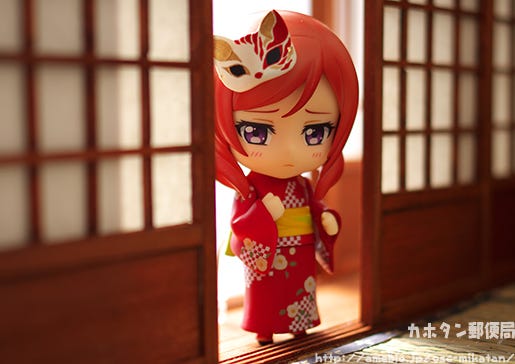 I have recently become quite addicted to tokoroten! Just combine the included flavouring with lots of Japanese peppers and a blend of spices and it makes for such an amazing food!!

Anyway, today I’m going to be continuing to look at some of the photos that were went in to Kahotan Post Office! You can find the previous post below!

The theme this time around was…
Summer & Figures!!

We are already into August! Is everyone enjoying their Summer?! I have started sleeping with the air-con on, increased by daily ice-cream intake to two per day and enjoyed all the signs in stores saying they have started serving chilled Chinese noodles! I even saw a fireworks festival the other day! …on the news!

Good Smile Company will also be attending various events including the upcoming Comic Market! Take a look at the event information page for more details!

Anyway, let’s get started on everyone’s photos! Thanks as always to everyone who sent in lovely photos!

I completed my doll house in time for the Summer and snapped a photo to commemorate. There is nothing that says Summer more like enjoying some watermelon on the veranda! What an ideal world! I wish I could eat watermelon on the veranda! (/ω＼)
I can just imagine the bells jingling in the wind and the smell of mosquito repellent! Hiei is really enjoying the ideal image of Summer in Japan here!!

I went on a trip to New York and visited the fountain that appeared in the LoveLive! movie. Rin-chan and Kayochin are enjoying some ice cream by the fountain! New York!! What a beautiful blue sky!! The two idols seem so happy together that I can’t help but smile myself! ♡ Two lovely photos that really capture the spirit of Summer from Leonov! A cute Miku playing around in some water and a yukata Miku peeking out from a mosquito repellent stand!   (〃∇〃)

The first thing that comes to mind when I think of Summer is sunflowers! Homuhomu has a smile on her face shining just as bright as the flowers! Homura-chan really does look so very happy with that shining smile on her face! The sunflower field together with the blue sky and scattered clouds… it really does capture Summer so nicely! (●’∀`人’∀`●)

Being a lovely-dovey couple is so much fun! Aah!! I hope they stay happy together forever!! Just looking at the photo allowed be to absorb some of their happiness! A photo really overflowing with euphoria! (´□｀｡)

“So refreshing!”. Drinking chilled juice up on the mountains with clouds in the sky is the perfect Summer! A Hidden Garden. Enjoying some alone time in the quiet of nature… Sa-san also went through many more lovely photos! These are just two of my favorites! ٩(๑❛ᴗ❛๑)۶
All of the others also captured Nendoroids in lovely natural environments so beautifully, I wanted to go out and take some of my own outdoor photos! ★

No matter where you go in Summer it’s always so very hot….
It’s days like that that I really enjoy some ice-cream together with Snow Miku-san in a nice air conditioned car. I’m glad that Snow Miku seems so cheerful even through the Summer! (^^♪

I might be wrong… but isn’t that the ‘White Lovers’ ice-cream?! I’m jealous… both because I want some of the ice cream and because spending Summer is Snow Miku seems like so much fun! ♪

All of the four characters together in the garden. The four DRAMAtical Murder characters seem to be having a lot of fun! I can just imagine their playful voices! The photo makes nice use of the various optional parts creating a photo really filled with love! (｡☌ᴗ☌｡)

Getting ready to go to a Summer festival. Maki-chan opening up the sliding door to reveal her cute yukata… with a bit of an embarrassed expression on her face! The scene is set so nicely and you can just imagine you are alone with her looking on to her cute appearance for the first time! (/ω＼)

“Bestfriends at the Beach”
Because I couldn’t go to the beach, I made a beach diorama for my Nendoroid Sakura and Tomoyo to enjoy the summer. A beach diorama made for Nendoroids! The attention to detail really shines!! （*’∀’人）?
I also haven’t had the chance to go to the beach this year, but just looking at Sakura-chan and Tomoyo-chan enjoying the beach makes me feel like I’ve also enjoyed a lovely time at the beach!

I found a rather refreshing card and decided it would make a lovely background for Dayo-san to walk along! ♪ The size of the card matches the Nendoroid size so perfectly! Dayo-san’s pouch is also a lovely little touch!

I hope you all enjoyed the photos as much as I did!

As usual I could really feel everyone’s love for the figures coming through each and everyone one! Thanks again to everyone who sent in any photos!

I’m going to be closing submissions for the Summer photos for now, but very shortly I’m going to be starting up an Autumn header request!  ₍₍ ◝(‘ω’◝) ⁾⁾ ₍₍ (◟’ω’)◟ ⁾⁾