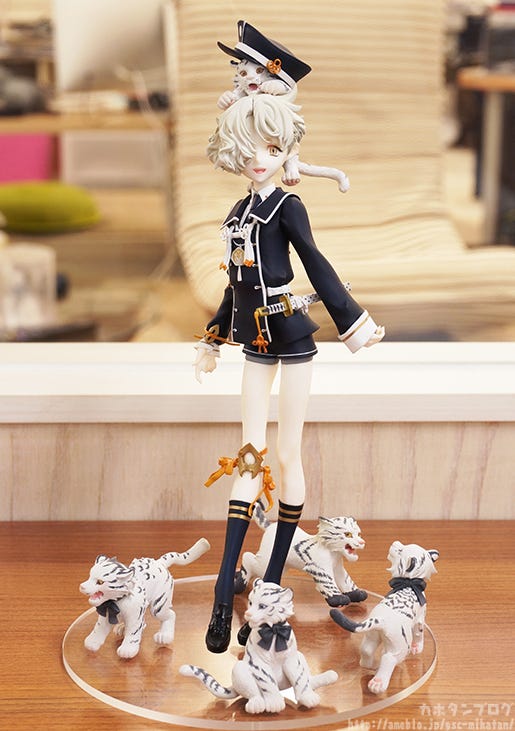 Hello everyone!  Chan-Shuu (@gscs_hirase) from the GSC Planning team here! Recently been walking two of the stations to work thanks to a certain game that involves throwing red and white balls…

Anyway, today I’m going to start off by saying a big thanks to everyone who came to visit the WONDERFUL HOBBY LIFE FOR YOU!!24 booth during last weekend’s Wonder Festival! So many people stopped by to enjoy the exhibits, sales and stage! It was such a pleasure to watch everyone enjoying themselves!!

Today I’m going to be sharing some photos the the new ORANGE ROUGE figures that were on display at the event! ▲ This is how the OR exhibit area looked!

As you can see there were so many people lining up to see the figures and take photos despite the heat!! A big thank you once again to everyone once again! m(_ _)m

The event had announcements of unpainted and painted prototypes as well as just illustrations of upcoming projects! There were a lot of them so let’s take a look! △ These were on sale at the event in a limited number, but are now also available for order at the GOODSMILE ONLINE SHOP for those who missed out at the event. You can find more details over at their official product page!! △We’ve already released some goods from the series, but there are also Nendoroid Co-de in the works!
▼ From Haikyu!! Kurasuno High VS Shiratorizawa Academy
Nendoroid Koshi Sugawara △ We announced him the other day, and here is his unpainted prototype! ♪ △ A whole bunch of other characters from the series are also on their way! Stay tuned for more updates! △ I can’t wait to display him with Nendoroid Osamu Dazai! △ Following on from the previously released Nendoroid! △ Unfortunately I still can’t show the photo of this one, but I really think he has come out fantastic! Look forward to the photos! △ The top sculptors that have been working on all the OR scale figures are set to continue with even more amazing figures on the way! △ The tattoo on his left arm included even in Nendoroid size! △Yamanbagiri has only been a Nendoroid Petite in the past, but is now joining the league of full-sized Nendoroids! △ My personal favorite Nendoroid at the event! The hat is actually…. I can’t wait to say!! (;ﾟ∀ﾟ)=3 △ In preparation of the upcoming anime series comes two Nendoroid Co-de figures of the two main characters! They are made specially in the image of the anime, making them a little different to the original designs. △ The long awaited ‘Naiban’ version is finally a painted prototype! His bandana also has a little secret to it… △ A figma sized version is also in the works! Such an amazing presence even in small figma-sized scale! △ I’m sure some fans were surprised about this rather sudden announcement! Currently still in the works so no photos just yet, but there will hopefully be some soon!!

Last but not least, let me take a quick look at this figure which was on display and is now already up for preorder!!
▼ 1/8th Scale Gokotai! The very first ORANGE ROUGE scale figure of a ‘Tantou’ short sword. His petite build, the tiger popping out from the back of his head and another four tigers running around at his feet make for a figure filled with highlights from both a sculpt and paintwork perspectives! ▲His charming teeth look great on the figure! So cute!

The characteristic coloring of his eyes, his soft looking hair and his silky white skin have all been beautifully included on the figure! Also take a look at the eyes of the tigers! They are such beautiful colors and so shiny and lively!!  (＾ω＾＊) ▲ The dark outfit contrasts with his pale skin very nicely!

The emblem on the back of his outfit with it’s shiny gold appearance also adds a nice accent to the overall design! The long sleeves cover up a large amount of his hands but the dainty fingers coming out the ends are so very intricate!! ▲ The long legs that come out from his short pants are so thin and yet still keep a lovely symmetry with a beautiful sculpt. The sculpting of his loafer shoes is also amazing!

But really… as if Gokotai wasn’t cute enough on his own, these tigers are absolutely adorable!! They can all be placed wherever you like as they are not held in place by anything! The 1/8th Scale Gokotai is currently up for preorder!

Orders from the GOODSMILE ONLINE SHOP… Will also comes with this Gokotai Sword Charm as a bonus!

Be sure to consider it when preordering! ╭( ･ㅂ･)و
But that’s all from me today! See you all again next time! (・ω・)ノ