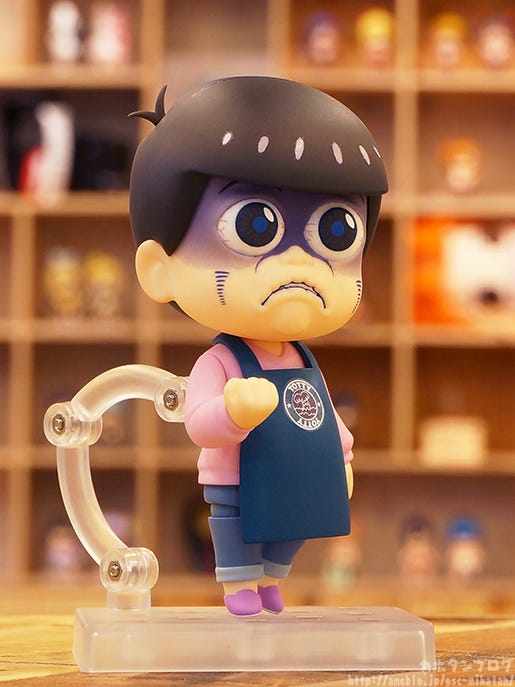 Following on from yesterday, today I’m going to be taking a look at…
Nendoroid Todomatsu Matsuno! “I’m the youngest of the brothers. Todomatsu Matsuno!”

The youngest brother who excels at taking advantage of those around him and knows just how cute he is! The perfect model for the youngest sibling, Todomatsu Matsuno is joining the Nendoroids! His lovely pink hoodie and denim pants have both been shrunk down to Nendoroid size along with his smartphone to hold in his hand! ▲ Talking with someone on the phone?

His right hand goes up just high enough to make him look like he is talking on the phone! The sticking up hair has also as usual been included on the Nendoroid design!

▼A trip out by himself! ▲ Creating a background with the figmaPLUS: School Route Set!

I’m sure Todomatsu takes a lot of selfies of himself! This photo is based on that idea! Todomatsu is often known by the name “Totty” as you can see written on this apron based on the uniform from the cafe! It connects to the figure by detaching the body and placing the apron in-between the head and body! It can also be worn by all of his brothers as well!! Let’s try that out…

▼ Everyone gets nice and close and then… ▲His classic Totty face is included!!

I don’t think there has ever been a Nendoroid face plate with such an impact! Those eyes, nose and mouth… everything about this expression is just so… whoa!! ((((ﾟДﾟ；))))

He also comes with a clenched fist which has purposefully been made to look more realistic than most Nendoroid hands! ▲”S-sorry, Totty…“
It seems Jyushimatsu accidentally hit his brother with a baseball… the flustered look on Jyushimatsu and that powerful gaze from Todomatsu really tell a story all on their own!!

Anyway, let’s move on with the next optional parts…
▼He also comes with a hat! ▲ This is actually a completely separate head part that replaces his standard hair to instead display him wearing the hat! He really looks quite stylish with the beanie… which can also of course be used on the other brothers as well!

▼ Even Choromatsu can be stylish! He is also holding the oden included with Nendoroid Osomatsu! It’s so fun swapping the parts around between the brothers! ♪

Plus, just like his brother’s before him…
▼He also comes with a blank faceplate! △ Personally I love the cunning expression on the left!

Orders from the GOODSMILE ONLINE SHOP will also include Special Round Base and Two Extra Blank Expressions as a bonus!

Plus as with all of his brothers, there will also be a special Nendoroid Pouch: Sleeping Bag (Todomatsu Matsuno Ver.) going up for preorder at the same time as him! so be sure to pick that up as well to carry him around with you wherever you go! Anyway, that’s all from me today! I hope to see you all again soon! (・ω・)ノシ