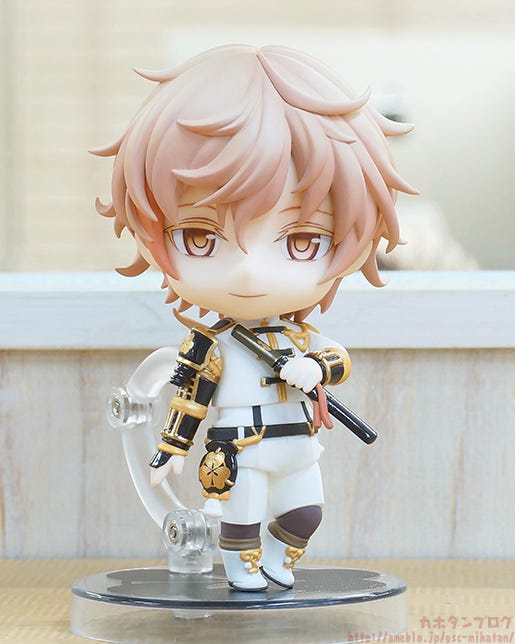 This is my third blog written for Kahotan Blog now! I’m going to be taking a look at ORANGE ROUGE‘s latest figure… “Yes, I shall bring you the best of luck!”
The wakizashi Monoyoshi Sadamune is joining the Nendoroid series!

This is actually the first Nendoroid of a wakizashi in the Touken Ranbu -ONLINE- series! He has a lovely white outfit with contrasting black equipment with gold highlights that give off a lovely majestic appearance! The pale pink color of his hair as well as it’s curly appearance has been faithfully kept on the Nendoroid design! It looks so lovely and soft I wish I could ruffle my fingers through it!! (*´Д`)

The long strand that twirls out from the nape of his neck has been sculpted to carefully curl to the side so that it doesn’t get in the way of the stand… and so that you can see it from the front! The right arm on Monoyoshi’s characteristic outfit really stands out the its gold and black design! The black areas are painted with a glossy paint to create a lacquered appearance, and Monoyoshi’s crest and the grid pattern have a very noble looking gold coloring to them!

The areas on his wrist and elbows are the fabric parts of the outfit, which are represented with a peal paintwork without a matte finish! Just like all the previous Touken Ranbu Nendoroids, Monoyoshi comes with both a sheathed and drawn version of his sword. The handle makes use of a dark brown metallic paint with a small golden ornament in the middle which is a lovely little highlight! The actual blade of the sword even has tiny little markings all long it! (;゜∀゜) This pose is based on his combat pose from the game! You can pose him with his sword held in his right hand and the scabbard in his left! The hip joint is the same kind included in Nendoroid Tsurumaru Kuninaga that allows impressive articulation without compromising the appearance of his outfit!

This angle also gives you a good look at the salmon pink tuft of hair that falls over his right cheek! ( ･ㅂ･)و ̑̑ Quite the change from his smiling expression, but one that shows that he is also ready for combat! （≧∀≦＊） With the right combination of parts you create a pose similar to his awakened pose from the game! The bent leg part is a completely separate part that is swapped out with his standard foot part! for a more dynamic appearance! ▲ Round Base with Crest!

As with all the previous Nendoroids from the series, Monoyoshi comes with a special round base that includes a print of his sword crest.

Last but not least, time for some announcements! These three figures will be joining the line-up in the future!
Stay tuned for more info!! To celebrate the announcement of the three products above, we will be having a stage featuring their voice actors at WonFes! Look forward to it!

▼#4: ：Nendoroid Monoyoshi Sadamune Live Broadcast! ♪
http://live.nicovideo.jp/watch/lv267549464
As usual, we will be having a special live broadcast just before preorders open! The broadcast will also be the first revealing of his third expression as well as the GOODSMILE ONLINE SHOP bonus! I hope you’ll join me as we take a nice close look at the figure!!