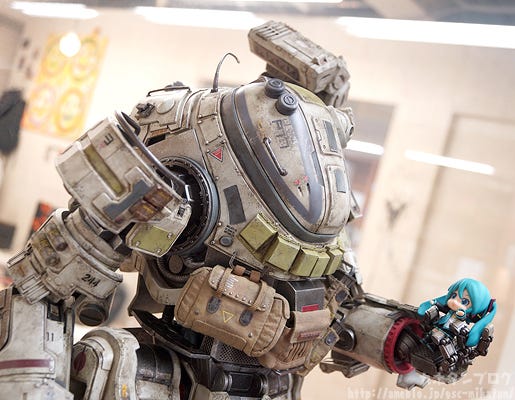 My chair in the offices is right by the air conditioning, so my skin tends to try out a lot… I get the feeling that even in mid-Summer I’m going to be rather chilly in this seat! The heavily armored Titan joins the battle on Frontier with the IMC color scheme!

The model features incredible paintwork that shows the armor has been though its fair share of battles, and the weapons have such an amazing mechanical appearance with so much attention given to little things like the clamps really brings the Titanfall universe to life right in front of you! It’s really a work of art from both a sculpting and painting point of view! △ The accessories made from real fabric add an extra level of realism!

The model also includes an IMC pilot with a battle rifle! It’s hard to think of the pilot as an extra part, he is way too detailed and articulated to not be considered a main part of the product!

Large portions of his outfit are made from fabric, and the damaged appearance of the armor helps to bring out the atmosphere of the Titanfall universe! The OGRE also comes with this 40mm Cannon which can be attached and removed whenever you wish! △ That heavy, weapon-like feeling has been captured so effectively!

The pilot is sculpted as a 1/12th scale figure, standing approximately 152mm in height – around the same size as a figma!★ △ An R97 Submachine Gun is also included with the pilot!

The pilot also comes with joints all over his body allowing for all sorts of different movements and poses! (σ・∀・)σ △ If you balance him really well he can even stand on one foot! ♪ △Relaxing after a long battle on Frontier! ♥︎ … I took this photo with the intention of having the pilot hugging Dayo-san… but while I was taking it Hamako from the planning team came by and said… “Why are you making them fight each other?”… (´・ω・`)

Anyway, the point is that there are all sorts of different poses to place the pilot in! But he is of course still tiny in comparison to the main feature… Around the same size as a newborn baby I would imagine!! △ Petite Dayo-san is rather tiny in comparison!

Each and every one of this fingers is fitted with joints, allowing you to pose the Ogre holding onto things like this!

Taking a look from a lower angle makes the model appear so heavy and mechanical! ε=(｡・д・｡) Just standing still it looks so imposing, but also features over 100 points of articulation including parts around the hips and legs that allow for all sorts of amazing poses! ★

But that’s not all!!
Just like the previously released TITANFALL M-COR OGRE the model also features light-up effects! ( ✧Д✧)

△ A switch on the back lets the lights on the top light-up blue and red! ★

But not only does it light-up…

The cockpit also opens and closes!

The inside of the cockpit has also been fully detailed, so be sure to take a nice close look if you choose to pick one up! △ Even the inside has a long history of battle…!

The pilot can of course also be placed inside the cockpit! △ The prototype is a bit delicate, so here is one of the official product photos!

Here we have Dayo-san riding inside the Ogre! △ She is so… intimidating!

The left shoulder also features a tri-missile launcher with all sorts of moving parts – even the missiles inside are included and can be removed as if being fired!

△ A lovely feature that adds so much playability! ☆

I’m sure the IMC OGRE will bring all sorts of fun to those who choose to pick it up!

Amazing to look at, fun to move around – add the gigantic Titan to your collection!
TITANFALL IMC OGRE! Orders from the GOODSMILE ONLINE SHOP are open until the 29th June at 21:00 for those in Japan. If you live elsewhere, be sure to take a look at the threezero store! The Nendoroid is only available to personal sponsors! Make sure you don’t miss out!The figma course is also accepting applications! The two Kagamine twins basking in the sun! ♪