I was born with black hair and have never tried any other colors… I’ve gone through phases of considering trying pink and blond hair in the past through!

Anyway, today I’m going to be taking a look at a figure already up for preorder… 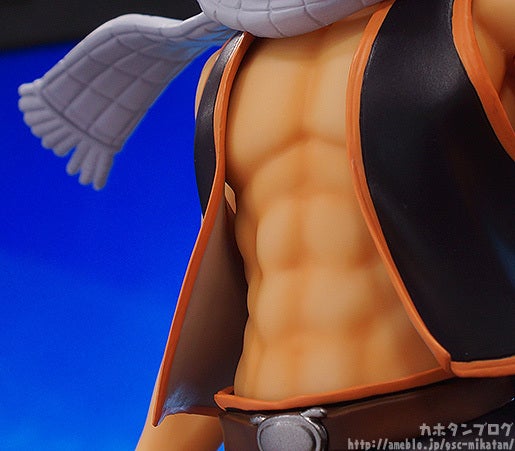 It’s quite refreshing to see a male figure released by Good Smile Company, isn’t it? This is actually the second 1/7th scale FAIRY TAIL figure from us, following on from the previously released Lucy! *Posed together with Lucy*

Unfortunately, Natsu’s colored prototype is currently in China… but luckily a sample had already come in from the factory the other day, so I’ll be using it for my review today! (The sample will be altered from what you see here!) (｀・ω・´) Anyway, let’s get a closer look at some of the details!

First up are his legs! ♫ They look so muscular…! The bones look amazing too!! His fingers are also each sculpted in great detail! His legs are a lot more burly than you’d ever see on a female figure! （*´▽｀*）

Moving on, let’s take a closer look at his outfit!! Even the creases on his outfit are amazingly detailed! It might look black at first, but if you get the right angle you’ll notice a hint of purple in the color too!

He has a rather tight coat with a fairly loose look around his hips and baggy pants. The look suits his design so nicely! Σ(・Д・

(・∀・) “The pose was decided on together with the sculptor!”

(・∀・) “Working close with the sculptor on the pose allowed for an amazing presence… even with a rather simple pose!” Hmmm… his scarf seems to have a little gap! Time for a closer peek! Oooh!! Even his scar is faithfully included! Don’t you get the urge to slide your finger along them?! (*´Д｀)=з

(・∀・) “Natsu definitely features lots of sculpting that you don’t normally see on female figures… his abs are definitely a part of that, but the muscles on his back are just as impressive!”

His… back…? Ah! You mean in your mind’s eye? They do look rather amazing…. I never considered myself much a fan of impressive muscles… but… but this looks lovely!! ♡♥ (・∀・) “As you may have already noticed, the fiery fist effect parts can also be attached and removed! Ah! It breaks into halves to fit around his fist! They’re also such a lovely color! ♡

(・∀・) “Of course the fist inside the effect parts is sculpted in just the same quality as the rest of the figure too!” A removable coat, optional effect parts… for a scale figure you get quite a large number of possibilities! ♪

(・∀・) “This kind of ‘macho’ male figure is definitely quite a rare thing from GSC, we hope that more female fans will see the charm of figures through it!”

Now that I think about it, Gray Fullbuster’s prototype was also on display at WonFes, wasn’t it? ♪ (・∀・) “We’re aiming to have him ready for preorders in April sometime! He’s in a great pose to display with Natsu!”

All sorts of different options to pose!

Orders from the GOOD SMILE ONLINE SHOP are open until the 16th April at 21:00JST!