Hello everyone, former transfer student Kahotan here! (@gsc_kahotan) My family was always moving about… I transfered between three kindergartens and two primary schools!

At first I was confident I could write this blog in rough way to make it sound like Ryuko… but it was a lot more difficult than I imagined… so I decided to keep things normal! (；´∀｀)

Anyway, without further ado, today I’ll be taking a look at… With the final episode coming up soon we’re going to keep up a steady flow of Kill la Kill figure announcements coming your way… starting off with Ryuko-chan!

Her adorable suspenders and sailor uniform (Senketsu!) have been shrunk down to Nendoroid size with careful attention to detail!

The confident smile suits her so nicely!! ♪ The trademark red highlight in her hair is slightly transparent!

In the official illustrations you’ll notice her eye and eyebrows can be seen behind the hair, so it only made sense… plus it looks amazing!! Her expression is also so easily recognizable… it has such a strong impact! (o・ω・o)

Of course she comes with other lovely expressions too!! You can even make this pose using the included shouting face! The pose just before her transformation scene!! ε=(｡・д・｡) The little tooth you can see sticking out makes it perfect!!

Definitely a pose that I know that I and many other fans of the series will be happy to display her in!! But it’ll be hard to decide… as she also comes with this embarrassed expression… my personal favorite! ♥ An embarrassed expression on Ryuko-chan just had to have this somewhat upset tsundere look to complete her!! She also comes with alternate hands to place in her pockets! The pose actually looks very natural too! (｀・ω・´)ゞ

Not to mention the curved mouth… it’s all so perfect!! Even while holding the Scissor Blade the expression works rather nicely! Even better with the clenched fist part!

Of course the shouting expression combined with the scissors makes for the perfect combat scenes! ♥ I can’t wait to display Satsuki-sama together with her…!

By the way…! Ryuko-chan isn’t the only one with a changing expression! Senketsu’s eye comes in two different versions which can be swapped around to match your pose! You’ll need to compare the images above to truly get a good feeling for the change… it makes him look a lot more surprised! ♪

“Ryuko! You need to come up with a cooler fighting pose!” “Ryuko! Are you even listening to me?!”

That’s the kind of expression I think the wider eye represents! ( -ﾉｪ-)

There are so many wonderful things I’ve already covered…. but let’s see what the sculptor of the figure himself thinks are the highlights of the figure!

(・∀・) ” There are all sorts of special things about Ryuko… starting off with her hair!” (・∀・) “Compared to most other Nendoroids, her hair is a lot less the center of gravity”

It looks a little bit like a Seiko-chan Cut hairstyle!

(・∀・) “Yep! The classic hairstyle from the ’80s! I even used Kasumi Arimura from her role as Ama-chan as a reference when working on the hair!”

What about the transparent highlight parts?

(・∀・) “That was an addition to show her expression through the hair just with the official illustrations – both the planning team and myself thought it would look great and once TRIGGER saw it they were also happy with the results!”

It was also one of the parts that the head planner Kyojin brought up during last month’s live broadcast! It’s never easy to keep the feeling of the original series when shrinking things into chibi size… but Ryuko has come out wonderfully! (・∀・) “The balance between how much detail to keep versus how chibi to make the character is always a tough topic. A good example here was Ryuko’s sneakers – we really wanted to keep the characteristic feel about them, which actually ended up giving her slightly larger legs that most Nendoroids.”

Speaking of characteristic… the Guitar Case is also impressively detailed! (・∀・) “You can pose her with it on her back or simply by her side, we made sure both would work! 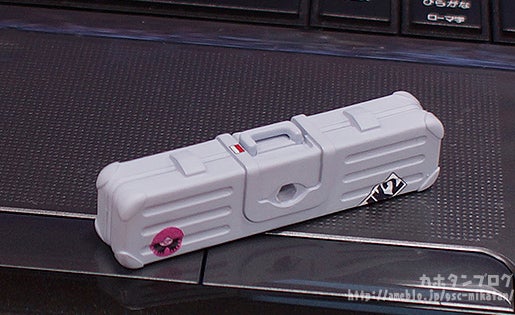 The reverse side has a hole to connect the Nendoroid stand into! ε=(｡・д・｡)

(・∀・) “We also wanted to add more posability to Ryuko seen she is a rather active character – so we added a Nendoroid Joint to her hips! Combined with the Scissor Blade you can make some really epic poses! It’s amazing how much more dynamic a figure can become when you move the hips! ヽ(*・ω・)人(・ω・*)ノ You can also see her stomach so nicely!

(・∀・) “There is something else that some people may have not noticed that I have to point out!” The thumb on her right hand…!

(・∀・) “Exactly! This hand can be used as a thumbs-up pose! Alternatively you can switch the direction around for a different feeling!” Pose her wiping her mouth after an epic battle! ( ﾟдﾟ)ﾊｯ!

There are so many ways to enjoy playing with this Nendoroid! ♪

(・∀・) “Kill la Kill is definitely one of my favorite series at the moment… and I’m proud to have poured my love into this Nendoroid! As we head toward the final episode I hope fans will also look forward to grabbing this Nendoroid too!”

Enjoy all sorts of different poses of Ryuko-chan! ♡

(・∀・) “I also have a little announcement to make!”

Today we’re also joined by Kyojin from the planning team!

(・∀・) “All orders of Nendoroid Ryuko Matoi from the Good Smile Online Shop will all include a miniature Scissor Blade as a bonus!” Maybe you’ll get a better look at Mako-chan if you tune into the live broadcast today?!

This time around I’ll be taking a look at a number of new figures as well as taking a closer look at what will be available at the upcoming Anime Japan 2014 event!

· This Month’s Highlights!
With the final episode approaching, the popular character is due to be announced soon! With a second on the way! More Bathtime goods might also be on the way! ♪

· New Upcoming Sneak Peeks!
Characters from this season’s anime are soon to be joining the Nendoroid world? Maybe some new Medicchus too!

The broadcast is on the night before the upcoming long weekend!
We hope you’ll join us – I’m sure I’ll get some juicy info from the project planners!

Anyway, I hope to see you all again next week!
Enjoy the long weekend if you’re in Japan!