I haven’t been to Disney Sea in over three years now… I’m definitely gonna go this year! I’ll make sure to ride the Indiana Jones attraction too!!

With that said, today I’m going to be taking a look at a product releasing on the 21st March… The dandy explorer is finally ready for release!

Just looking at it I can’t help but think of the theme song… it’s playing through my head right now! （*´▽｀*） The alternate hand parts are included in a packet outside the blister pack. He doesn’t come with any alternate expressions, but an alternate set of eyes are included to pose him with either a forward gaze or a sidewards glance.

His trademark whip is of course also included – and it’s included in both a rolled up form for him to hold and a longer version to display him in action! Hmm? It seems Indy has found something of interest!! Could it be?! It’s the fabled Golden Idol! It’s so tiny… and yet so very detailed!! But just then… he realized there just happened to be something that would get him down! What luck!

It’s… a blue hose! waterfall he can ride down!!
*Imagination is a wonderful tool. * Indy decides he can easily ride the waterfall to the bottom* Which means… it’s time to cue the BGM! 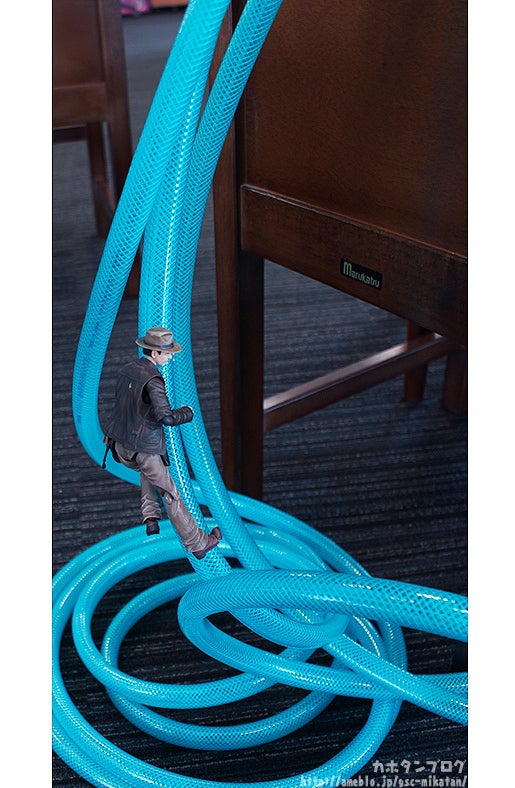 Too easy for Indy! The Golden Idol is his!!

It was a little different to most of my reviews, particularly seen a lot of the photos were from quite far… but at the same time I think it gives a great feeling for the playability of the figma series. I wasn’t even using the figma stand for my photos, but if you do you can make all kinds of poses and still have them hold in place perfectly! (o・ω・o)

By the way, Indy also comes with a pistol and the Holy Grail for more options! The Sankara Stone is also incluced… and due to the fact that the outfit is made from a soft material you can even pose him trying to hide it like this! This decorative pot plant suddenly looks like an epic jungle adventure with Indy standing with it! I’m sure there are countless of fun places you could take amazing photos that would suit Indy perfectly! ★

Plus he comes with all sorts of goodies to enjoy! Adventure awaits!!