The lovely autumn weather continues making it the perfect time to go out! I’m normally very much an indoor person, but I have the strangest urge to go out and pick grapes when it weather like this comes along…

Today the GSC Event page was updated with new information regarding Machi Asobi, so today’s blog will be focusing on information about the event! (｀・ω・´）

GSC will have figures on display and product on sale at the event! (｀・ω・´)

The booth will have the latest figures on display and various anime-related goods on sale! There will even be some goods from some of the new October anime series! I’ll give more details as soon as I can get hold of them! (｡･ω･)ﾉﾞ

On the 13th and 14th October, Nendoroid Petite: Mikudayo will be on sale! Nendoroid Petite Mikudayo is an event-only product, and will not be in regular stores or sold online! But note that stock at the event is limited, so come by early if you want to make sure to get one!

If you want more updates regarding the event and product information be sure to follow both Gumako (@GSC_GUMA) and the GSC Sales team Twitter (@gsc_sales)! They will let you know when stock runs out of certain products!

Plus the popular yellow creature with a second season anime on the way, wooser-sama will also be visiting Tokushima!! The photo above is wooser at this year’s AniSummer 2013! One of his first appearances was in fact last year’s Machi Asobi, so there is no way he would miss out on this year! He will be wandering all around the event and those lucky enough to meet him will be able to receive the ‘Trading Card No.003’! The design of the card is a secret for now!!

If you want updates on where wooser will be then keep your eye on the wooser Twitter account! (@PR_wooser) (σ・∀・)σ

Also a little bit of information from my side – I’m going to be attending the Girl’s-Only Secret Industry Talk Show!! ((((；ﾟДﾟ))))

The event description calls it the ‘Only place where girls can find sanctuary at Machi Asobi’… I don’t really know if I qualify to be there, but I’ll do my best! But there are of course all sorts of other things going on at the event as well!

Including some ‘Arpeggio of Blue Steel’ events!

Machi Asobi will be featuring a special broadcast of the first three episodes on the 12th October, which will also feature a talk show with the director, Seiji Kishi and voice actor for Iona, Mai Fuchigami! There will also be a talk battle(?) between Seiji Kishi and the producer of the series, Sanjigen’s Hiroaki Matsuura! ヽ(*・ω・)人(・ω・*)ノ

Details can be found here: http://www.machiasobi.com/events/arupedio.html

The screening will take place at the ufotable CINEMA, so you’ll be able to enjoy a lovely big screen and amazing sound! It’s quite a rare chance to see a TV anime series in a cinema, so be sure to join in if you’re at the event!

I actually had the opportunity to join a screening the other day! It was also up till episode three and it was really amazing!! The story is enthralling and the music really suits my tastes perfecting! The main theme really gets me excited!! Not to mention the epic music in the naval battle scenes!! ((◎д◎))

The OP theme is by Nano feat. MY FIRST STORY and is called ‘SAVIOR OF SONG’, also a very lovely song! It really suits the series and makes me feel like I should get out on a boat myself sometime! The ED theme was also beautiful – ‘Trident’ sung by the voice actors of the series, Mai Fuchigami, Manami Numakura and Hibiku Yamamura! I strongly recommend this series as one to watch this season! The (almost) full 3DCG animation from the same team that brought everyone 009 RE:CYBORG has really done some impressive work once again! The movement of the I-401 and battle scenes are simply amazing to watch! I can’t say too much as I don’t want to spoil anything.. and I know I’ve been prattling on for ages now…. but it really was great fun to watch!! Here’s a few pictures from the talk show! ☆ The MC was none other than Takeshi Washizaki-san! There were some interesting talks about the dubbing recording for the series! Some on-the-spot practice from the cast, and afterwards there was even a rock-paper-scissors contest to win a signed folding fan! (σ・∀・)σ At the end Okitsu-san said ‘Arpeggio of Blue Steel -Ars Nova- I-401…‘, and the audience all shouted ‘Ready for Departure‘! Everyone was nicely in time making for a great ending to a lovely event! I even got three picture postcards for taking part! (*´Д｀)=з 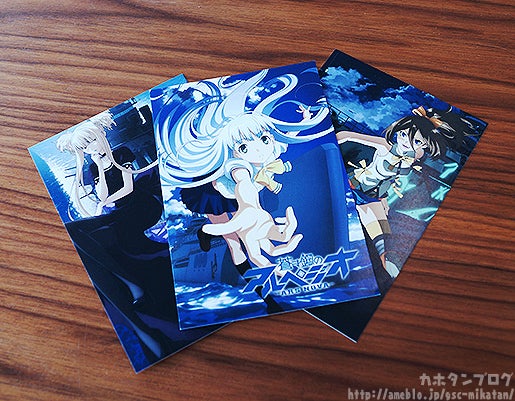 Apparently the postcards were random, but I was super happy to see Kongou-sama was in my set!! (ΦωΦ)ﾌﾌﾌ…！

The series starts airing on the 7th October!!

But also don’t forget that tonight…

Is the start of KILL la KILL in the Kantou region!
Those in the Kansai region probably already got to see it yesterday!

I’m sure many of you have already seen it, but if you haven’t then be sure to take a look! You can see a preview in the meantime at the official site!

I hope to see you all again next week!