Hello everyone! This is Oonoshi from the Web team, you might remember me from a couple of months ago! Mikatan-sensei came down with a fever, so I’ll be taking over the blog for today once again!

Today I’ll be taking a look at the Product Release Schedule on the GSC site! I’ll be explaining all the different kinds of releases found on this page, and I have Nagaizumi-san from the sales department to help with the explanations! The three different types of release are

‘Shipping out from GSC’, ‘Arrival at Wholesale Stores’ and ‘On Sale’

There are quite a few different possibilities! When I first joined GSC, this was one of the first things I needed to learn. Let’s find out from Nagaizumi-san what each of them means! (｀・ω・)

‘Shipping out from GSC’

Ah-hah! So that means that the exact day which the figure reaches the different wholesale stores will differ. Plus the wholesale stores still need to send the products out to the consumer stores, so the exact date they’ll be available can differ depending on your location.

So for example, if Nendoroid Kanna Tanigawa was shipped from GSC on the 18th February, it would first take a day (or two for distant areas or islands in Japan) to reach the wholesale stores, and then it’ll still take another 1-2 days to reach everyone’s favorite hobby stores… which means you’d probably see her in stores from between the 20th and the 22nd of February.

Which means of course that Nendoroid Kanna Tanigawa is now on sale in stores, so don’t miss out on her! ^^

So the products will reach the wholesale store on that day, and thereafter be sent out to the respective consumer stores. In other words the products should be on sale slightly closer to the stated date when compared to the previous “Shipping out from GSC’.

For example, the Nendoroid Petite: TYPE-MOON COLLECTION will reach the wholesale stores on the 25th February, and should be in stores from the 26th-27th February! That means that the set is also in stores now!

I see, I see. So figmas have a special release date that will always be the same across Japan. This has been the way Max Factory has worked it for some time now!

So for example, figma Aigis The ULTIMATE ver. will be on in stores and on sale from the 28th February! 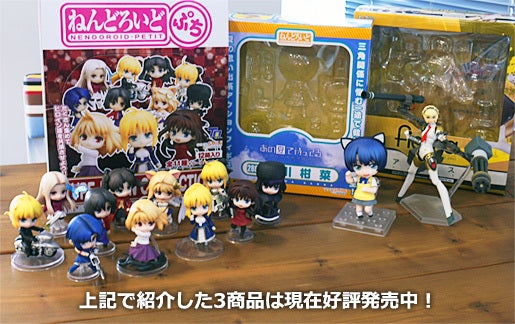 So that’s the reasoning behind the three different types of release dates. Be sure to check out the upcoming Product Release Schedule if you want to know when during the month a certain figure is expected to be available.

Obviously these dates are for Japan, so if you’re in a different country the products will take longer to reach you! Plus figures can also be delayed by various unforeseen circumstances such as the weather – we’ll keep the schedule updated with any changes!

I hope the next time you’re checking through the schedule this post will have taught you something!

But now I’ll be passing the blog baton back to Mikatan!