I want to shout as well!! ヾ(ﾟ∀ﾟ)ﾉ゛

Today we’re going to be looking at the lovely Miku Hatsune : Love is War Ver.! 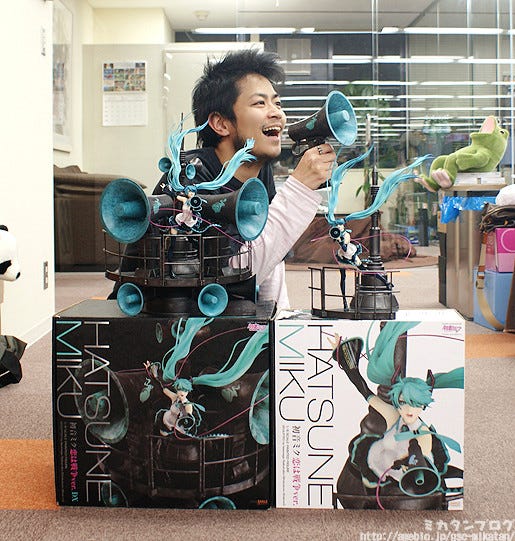 This is how the boxes look!

If you place the boxes of the two versions together it’s just big enough for Gakkun to sit behind! :P

The left is the DX ver., and the right is the standard version!
The black and white contrast between the packages looks great displayed next to each other like this! The boxes are also a lovely high quality paper – you’ll feel for yourself when it arrives. 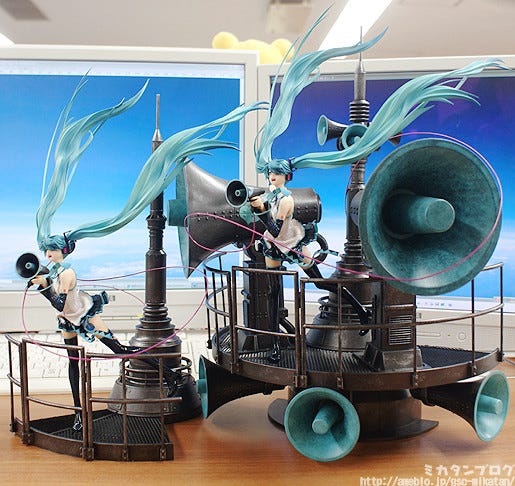 From the popular song composed by ryo and produced by supercell with illustrations by Shirou Miwa, ‘Love is War,’  is this lovely  1/8th scale figure of Miku Hatsune! Her long flowing hair is blowing up behind her, her skirt is also flying up in the wind as she holds a megaphone in her one hand and leans over the edge of a railing, shouting out about her love! It’s a beautiful and dynamic pose that recreates Shirou Miwa’s original illustration perfectly!

The exact size is written on the GSC website, but you can also get an idea of the size based on the comparison with the monitor and keyboard here. It’s really big! But even though it’s big…

The sculpting is absolutely fantastic! 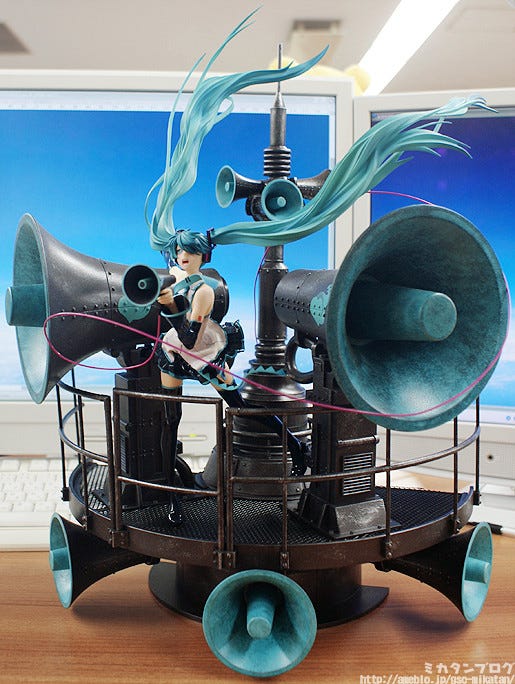 Let’s take a look at the DX version first!

This version includes the huge speaker stand that was found in the background of the original illustration. Back when we saw the prototype I remember asking…

I really thought it was too complex! But it seems that the production team has managed to pull through a miracle! Even the unique texture on the speaker part which I thought would be one of the hardest to get right came out perfectly. Apparently it was applied by dabbing it on with a kind of sponge. 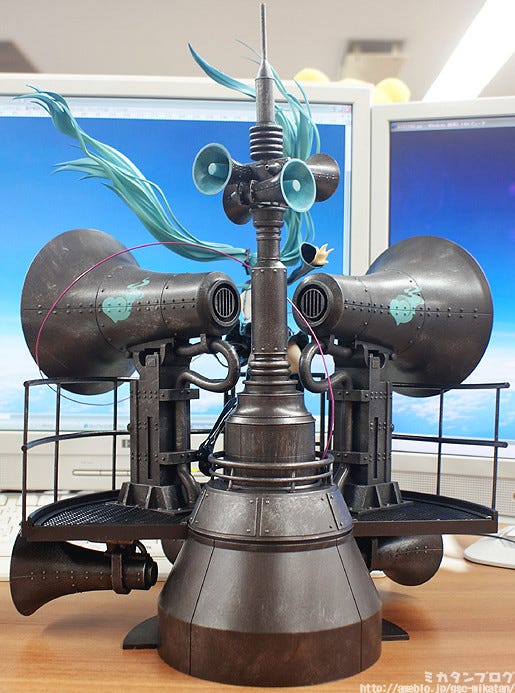 The huge stand is made using 3D data, but the production team was quite troubled how to mass produce it nicely. It ended up very easy to put together and still looks absolutely lovely! The DX version was only available by web sales – but I’m certain everyone who ordered will be happy with the final product! 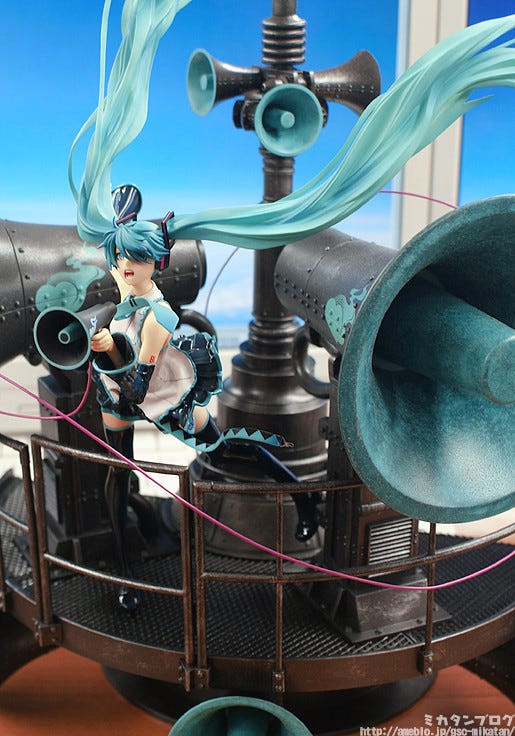 Just look how lovely it looks!!

I wasn’t sure if the pictures would do it justice, but the stand on both versions has a lovely look that really makes it look like cast iron. It even has a realistic rough texture!

The rough texture comes entirely from the paint work!

The fence in front of Miku can be removed, and you can put it side-by-side with the underside of the figure (which is unpainted), to compare the flat surface to the rough surface! 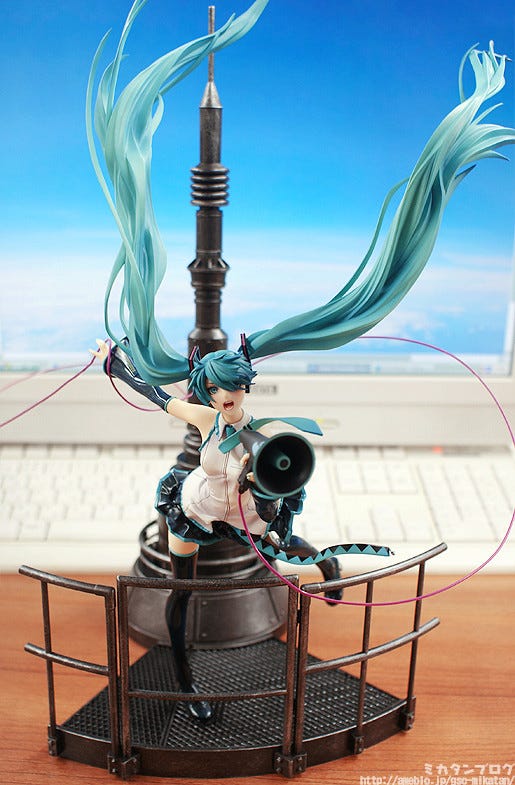 This is the standard version!

It does look a bit simple when compared to the DX ver, but even the standard version is rather impressive in size! The actual Miku figure in both versions is identical, but the smaller version is ideal for people who don’t have the space for the huge stand included with the DX ver. It’s also going to be available for standard retailers, so anyone can still pick this one up if they missed the orders last year. 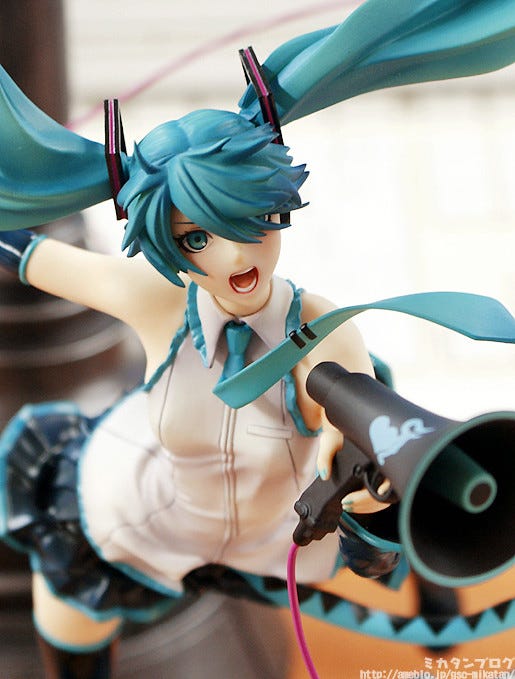 It’s absolutely incredible how similar the final version is to the prototype! I almost can’t tell the difference! I thought the same about the 1/8th scale Madoka the other day – it really goes to show just how fast the figure production industry is improving! 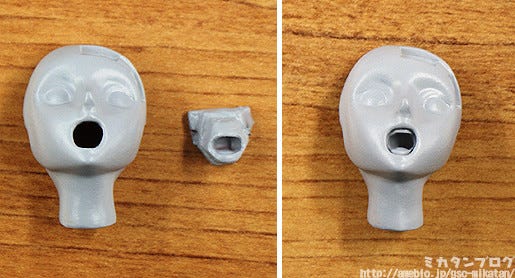 The face is made up of two different parts!

I bet you never expected the face and mouth to be two different parts! If you put the two parts on the left together, you get the Miku face on the right! This allows the painting to be done separately to make sure that none of the colors run into each other. Extra work to make sure the figure comes out even better!! 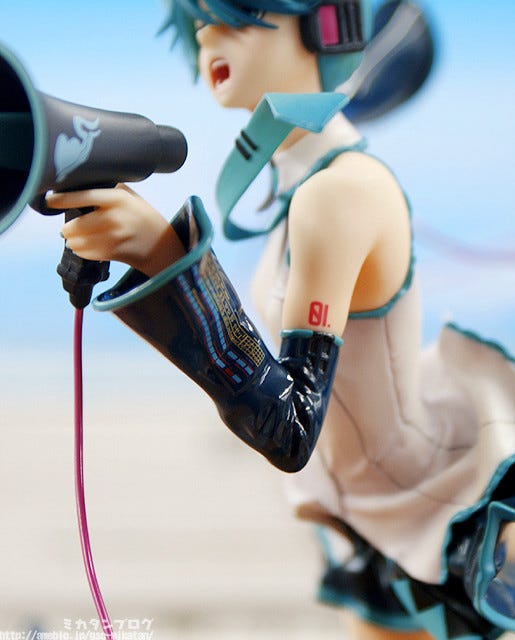 The coloring on the arm cover is incredible!

I’m sorry you have to view this all through my shoddy photo work… but the arm cover, skirt and boots all make use of a lovely shiny black color! It has a kind of blue tinge to it that really makes it look great! 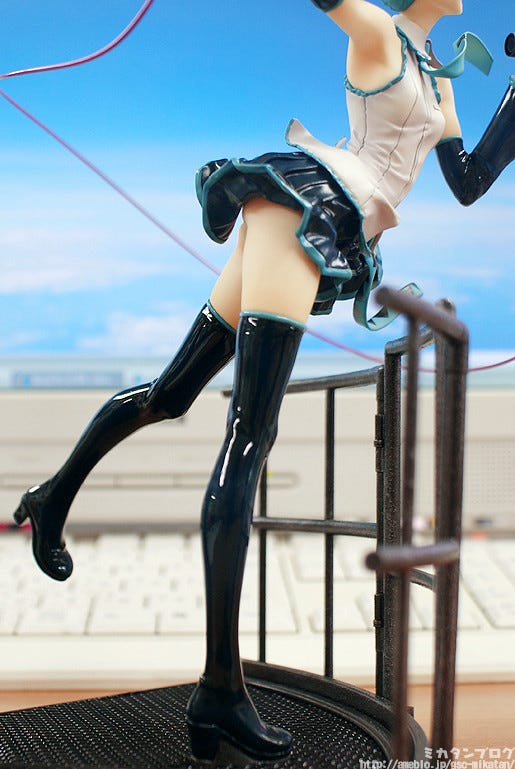 She is posed leaning forward over the railing in a very sexy pose! Just look at those lovely thighs!!

The wrinkles in the skirt are also absolutely fantastic! (Plus they were apparently very hard to sculpt right :P) The way the skirt is picked up in the wind is also quite the sight for fans! ^^ 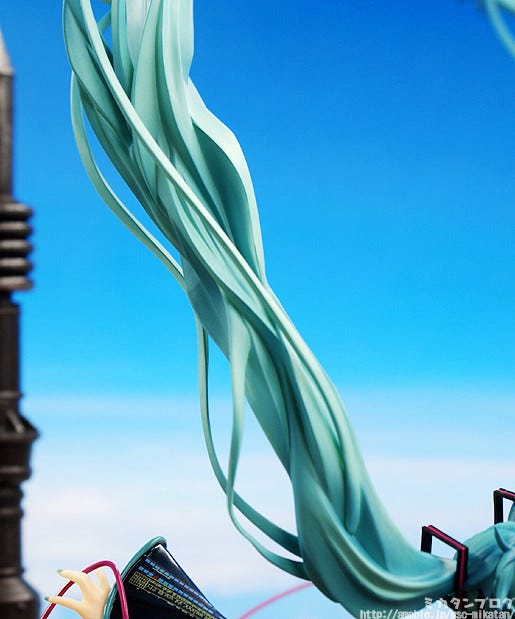 The gradient on her hair is beautiful!

Love is War Miku is well known for the long hair flowing out behind her, and it’s lovely to see it in figure from! I love the way it looks! Shirou Miwa’s illustration has really come to life with this figure! 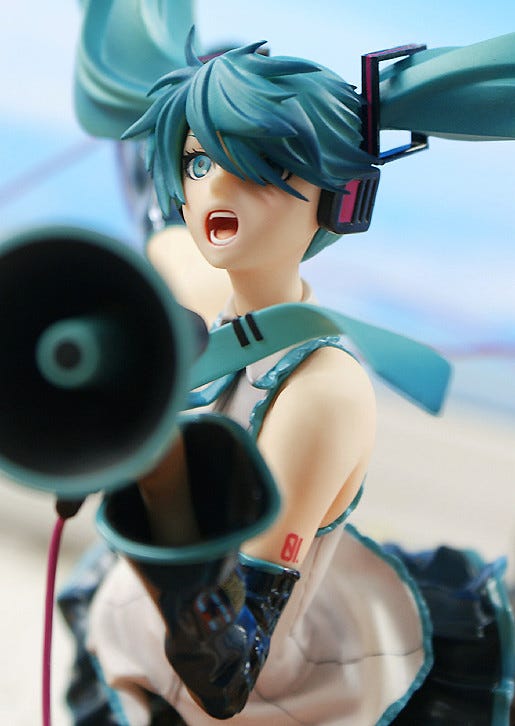 A nice close up of the front!

She really has been sculpted down to the finest of details, when you pick it up in your hands you’ll know instantly just how wonderful it is! Even zoomed up this close she still looks fantastic! 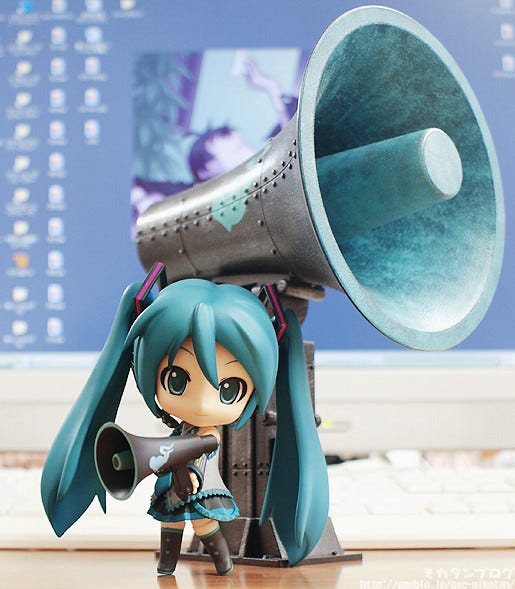 You could see Gakkun holding it in his hand in the first image as well – it’s really big enough for that to look realistic! :P Nendoroid Miku is can even hold the speaker! (It does need double-sided tape, though :P) 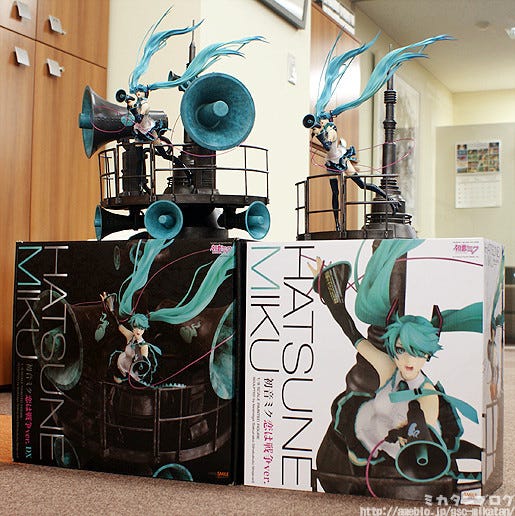 The DX version will be shipped out on the 30th January!
Those who ordered it can expect her a few days after that, depending on your location.

The standard version will also be sent out on the 30th to both those who ordered and to stores!
Those who ordered it can also expect deliver a few days after that, depending on your location, and those who want to buy it can pop into our partner shops and grab one!


But anyway, that’s all for today!
I hope to see you all again tomorrow!! (・∀・)ノ゛