Yes… the last article was indeed 10 months ago… sorry…

But the field trip series and ‘D.I.Y. Repair’ articles have been very popular! Today we’ll be looking at assembly, but first lets do some quick revision!

▼ How the Painting Works! 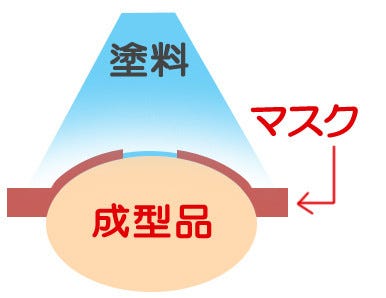 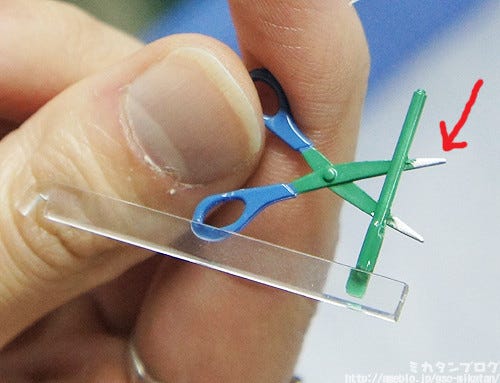 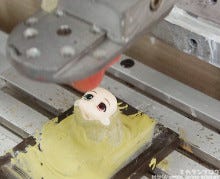 If you have no idea what I’m talking about, then you might want to read up on the previous articles first! 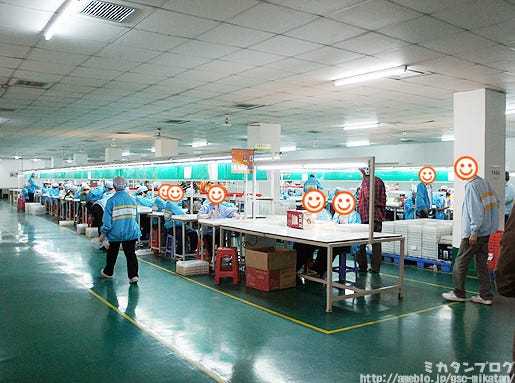 Let’s head to the production line!

But before that, let me just mention that the ‘Field Trip’ series actually goes between a number of factories – it’s not all from just one! The basic procedures are the same at all of them, but each factory has slight differences depending on the products they are working on. 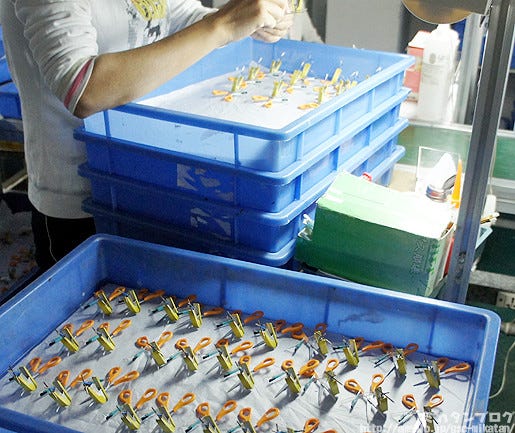 As I mentioned in a previous article, all the stationery falling from Senjougahara’s skirt is made piece by piece, and then put together by hand! 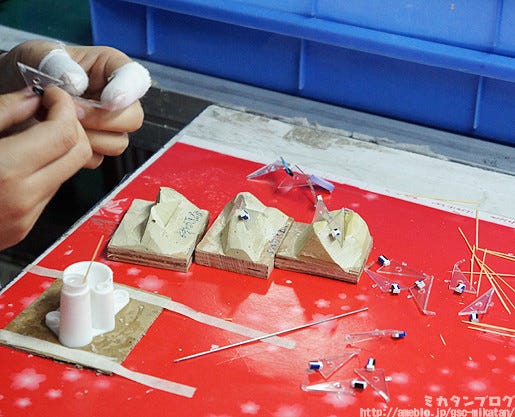 They are all adjusted to the same angle!

The three strange looking mountain things in the middle are in fact used to make sure that the angle is correct on each part. The one of the left is for the triangle, the middle for the eraser and the right for the craft knife! The toothpicks you can see are used for applying glue and small adjustments – just like at Good Smile’s main offices!! 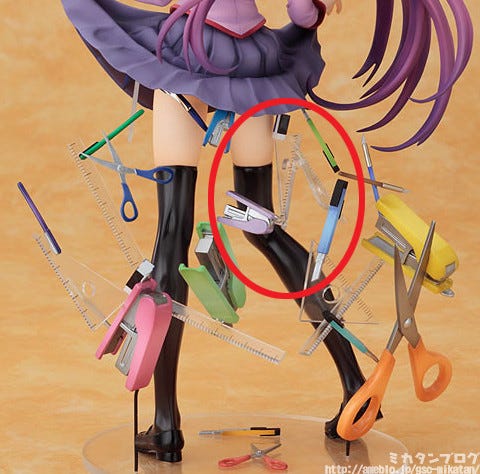 It’s this part here on Senjougahara! 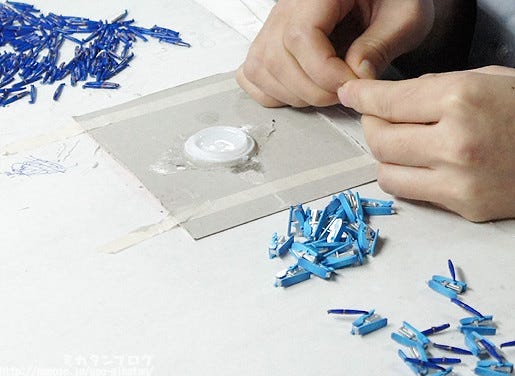 The little stationery is just incredible!! 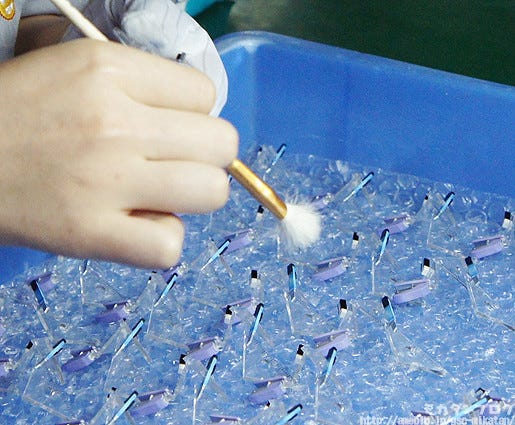 Clearing dust away with a little duster!

Senjougahara has lots of clear parts around the stationery where dust really shows up, so they need to be dusted down. When you think of mass production you often think of tons of machinery, but that’s not always the case! 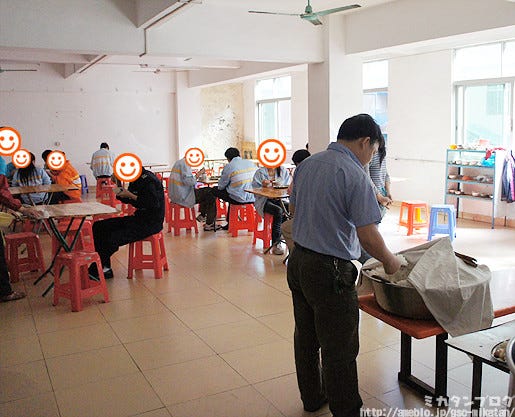 It’s lunchtime! The factory has a little cafeteria like this! I wanted to eat with them, but was told I couldn’t because I was a guest… :( 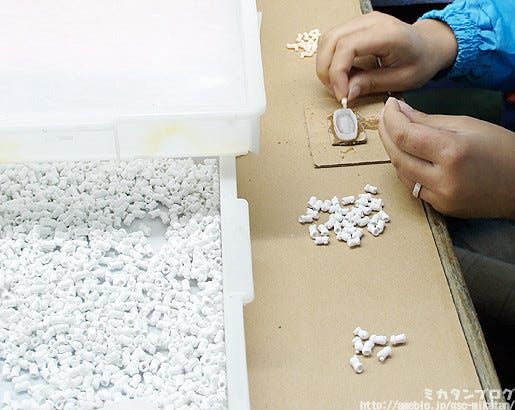 The arms are being connected to the sleeves as nearly as possible! Nendo Petites tend to have a lot of little parts, so they’re quite a lot of work for the factory workers. I think the number of sleeves you can see on the left is a good example alone of how much work it must be!! 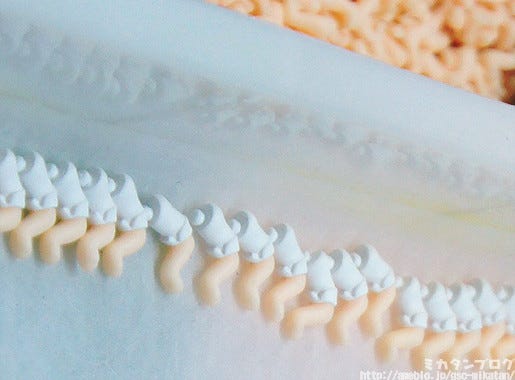 The complete parts all neatly lined up!

All the parts are lined up carefully so they they don’t touch each other and scratch off the paint from each other. It also makes counting such tiny parts much easier! 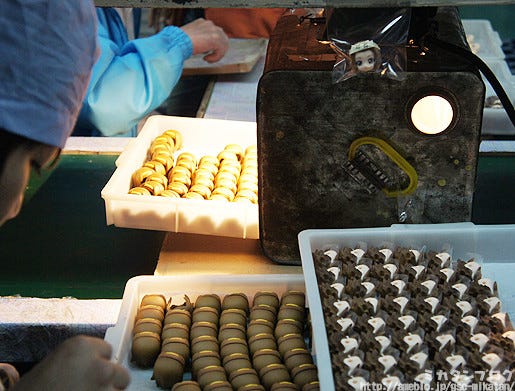 Putting the face and head together!

This is also done one-by-one all by hand! If the temperature is too low the PVC will shrink which will cause the assembly to be much more work, so the assembly is done under a warm light to make it easier. 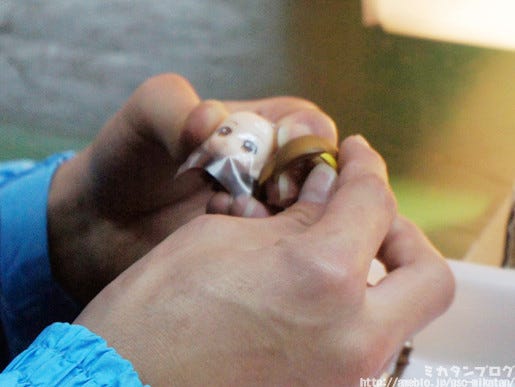 Some film to stop paint from rubbing off!

Sorry the picture is a little bit out of focus… I’m sure we’ve all opened a figure before and found some of the paint has been scratched off or a line of paint is in the wrong place… nobody likes to see that on their figures! In the photo above, the film is wrapped around the expression to make sure that the color of the hair does not rub off onto it.

Those of you who have bought figures in the past will know that this film is found all over the figure when you first take it out of the box. To be honest, before I joined GSC I always thought it was just a nuisance to have to remove the film each time I bought a figure… but now I realize just how important it is to keep the figure in the shape it should be! I’m now very glad to see it on the figures as I know that the factory workers have been working hard to get the product to us in the best possible condition! 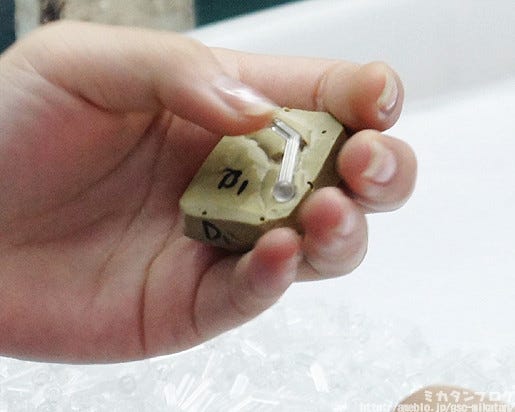 This little block is designed to make sure that the prop is not warped in any way, and will fit the product correctly. You can see the parts number written at the bottom of the block. Obviously this stand varies between products… but these Nendoroid Petite props must have been made tens of thousands of times!! 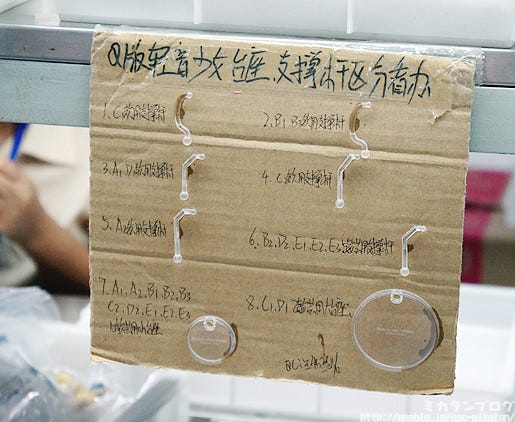 Samples placed along the production line!

This is a sheet of samples for Nendo Petite props and bases. It’s placed all along the line to make sure none of the factory worker’s lose track of what parts they are working with. If you look three pictures up, you can also see the sample if Ricchan’s head is stuck up for workers to confirm! 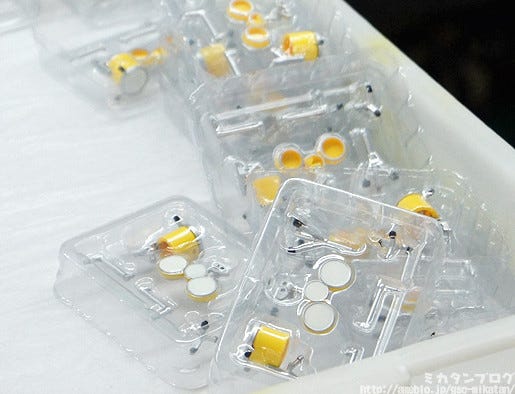 These are also placed into the blister packs carefully by hand! And then… 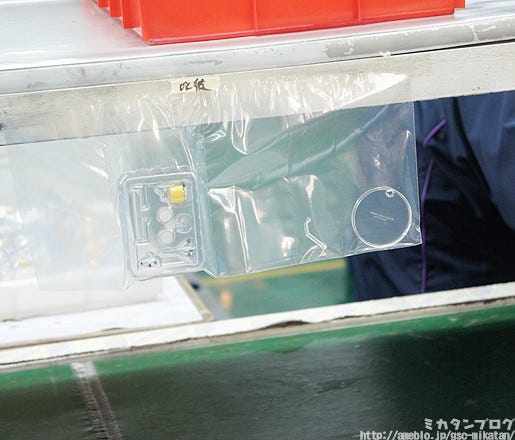 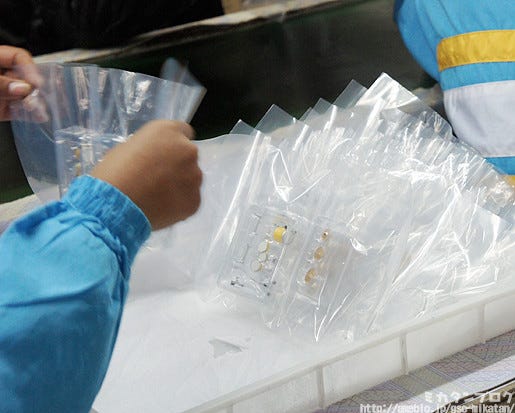 They are placed with the stand in bags!

Ah-hah! Now you can see just why the samples are needed – else you wouldn’t know which prop to put into the bag! I have to say again that the workers are incredibly quick at what they do! I guess they need to keep up a good pace so things don’t fall off later down in the production line. 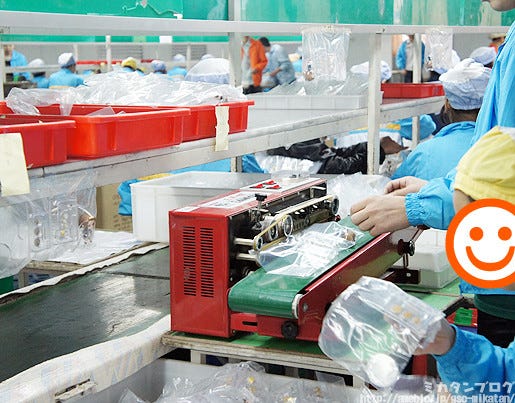 They are then sealed with a machine!

The red machine in the middle of the photo seals the bag closed with heat. The worker with the GSC face then makes sure that none of the parts are missing from each bag. They check everything so carefully!! ((((;゜Д゜)))) 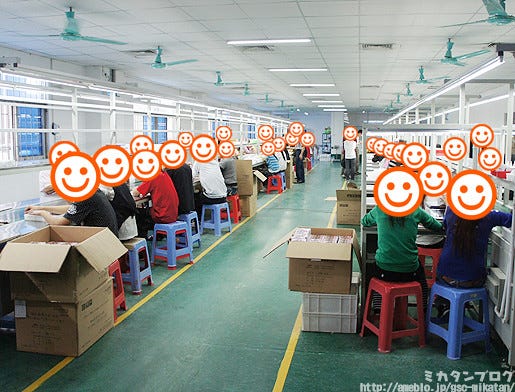 Here the assembled Nendo Petites are all packaged and placed in boxes… I think we’re reaching the end of the process now! 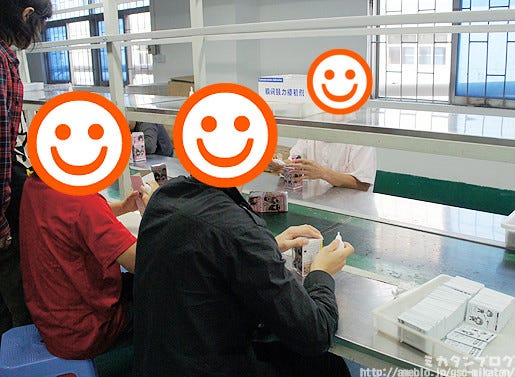 The info booklet is added, and sealed in!

Gakkun from the production team is on the left here! He’s making sure that each of the final products is coming out as they should! Gakkun is very strict when he checks the products… a lot of the factory workers looked very nervous when he was around… which made me feel just as nervous! :P 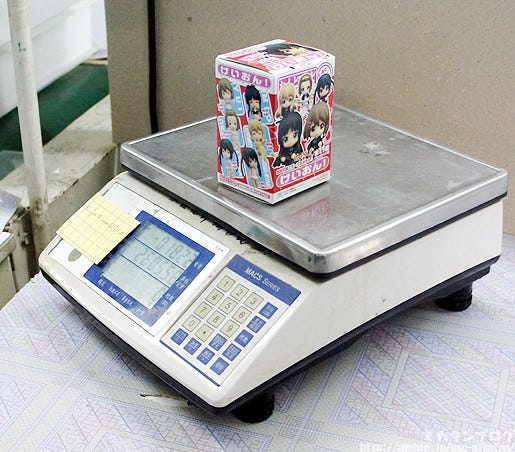 Finally, each box is weighed!

This is a final check that no parts are missing from each of the boxed products. 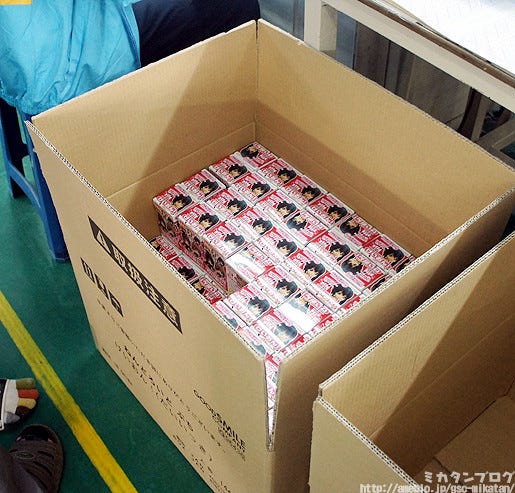 They are then all placed in a big box!

Nendo Petites generally come in a box of 12, but it would be rather disappointing if the box was fulled with all of the same character. To make sure each box of 12 has a good balance of characters, a box filled with all of the same character is sent through like this first, and then the boxes of 12 are organized afterwards. Once the boxes are sealed there is no way of telling what character is in which box, so they need to be very careful to label everything correctly! 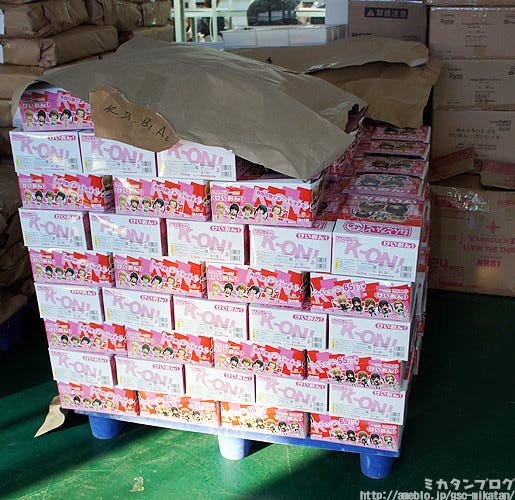 Now after their long, long journey, the figures can be sent to Japan! Figure sculptors are incredible artists, but just as they are artists, the factory workers that mass produce the figures are artisans! Obviously each figure is considerably different, but in the end, all of them go through an incredible amount of work and love before they reach us! If I get another chance to visit China, I’ll be happy to visit again… I would even want to try my own hand at putting the figures together! :P 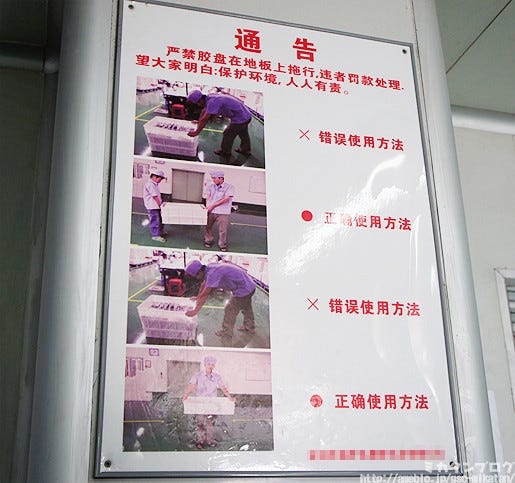 In the factory this panel was stuck up, showing the factory worker’s how boxes should be carried! It’s surprisingly easy to understand too! 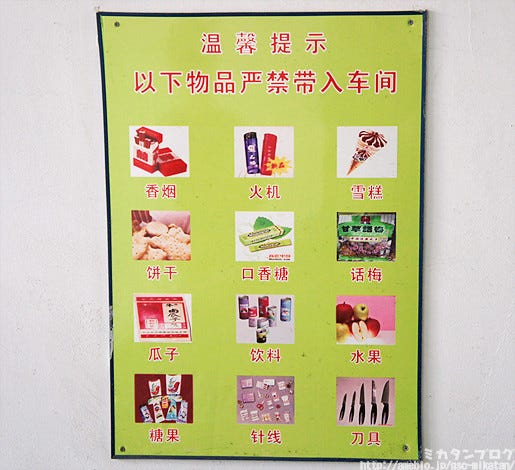 Food of course is not allowed, but it looks like liquids are also no good! I guess it would be quite bad if some of the liquid somehow got sealed in with some products… ^^; 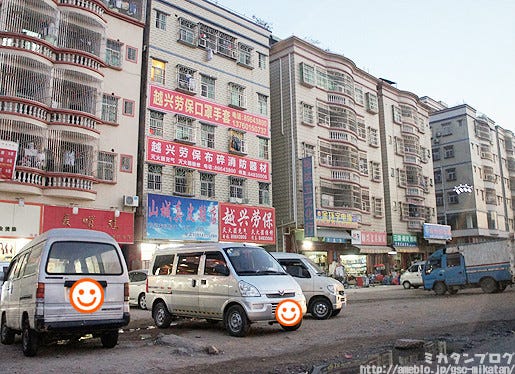 I was brought here by car, and seeing all the stores along the street was very interesting! In the evening there were also lots of people walking about the streets. The air was a bit drier than I was used too, but not to an uncomfortable degree – I really enjoyed my stay in fact! 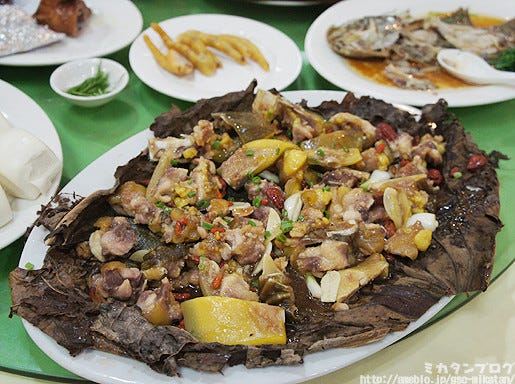 And the food was wonderful!

This picture is in fact a turtle dish! :P
When in Rome act like the Romans! I decided I had to try some authentic Chinese food while I was visiting! I’m sure everyone will have different opinions, but personally I really liked the crab and yamcha tea. The mantis shrimp was absolutely huge – as big as the spiny lobster’s back in Japan! (I ate two of them! :P) I’m told that in China, meals are taken very seriously and it’s very common to have big meals with as many people as possible together.

And then the tea!! At one of the factories we were given some tea and it was absolutely delicious! I enjoyed sipping it down so much!

Finally… I have to say that I really enjoyed putting these reports together! If there are any requests for similar reports in the future, let me know by mail!