Yesterday, you might have seen these two lying in the spoils of war… 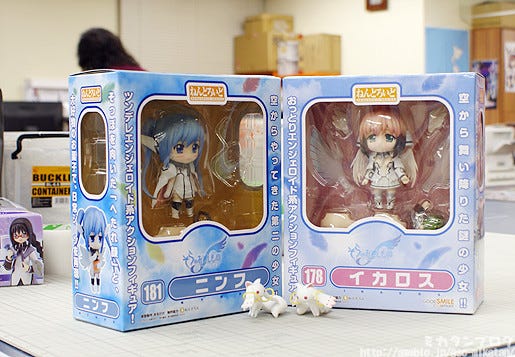 Today we’ll be taking a look at Nymph!

Ikaros was already released a couple of months ago, but in a few days Nymph will be released too, and you should be able to find her in stores – so lets take a closer look at her! 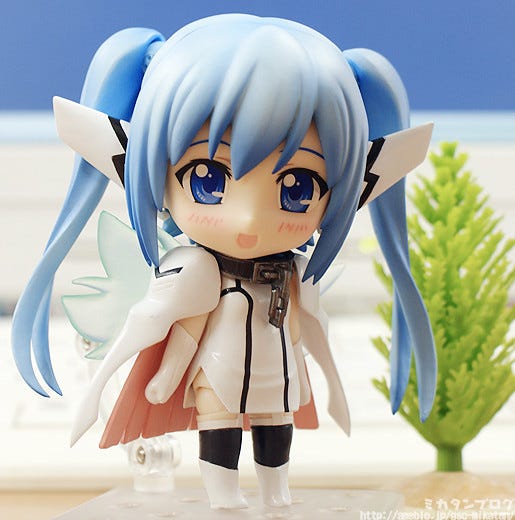 From Sora no Otoshimono:
Nendoroid Nymph!

Nymph is the Electronic Warfare Angeloid, Type Beta, who came down to Earth in an attempt to bring Ikaros back!

As I said back with the prototype… that outfit is so sexy!
The slits at the sides of the one-piece are really something! :P 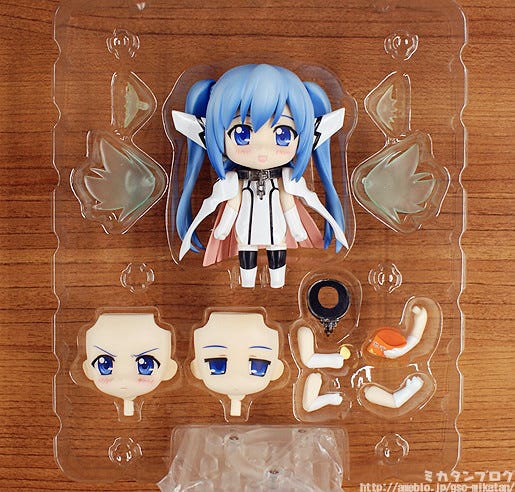 When taking out the broken wings in the upper section, be careful they don’t pop out and go missing! 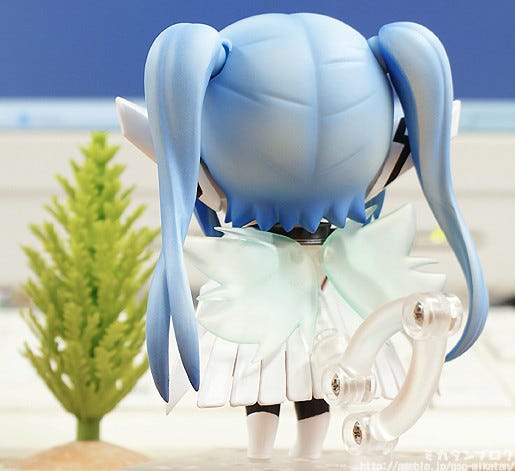 This is how she looks from the back!
The clear wings look so beautiful!!

They are made so that the edges have a slightly darker blue look to them – a small touch that makes such a big difference.

The stand is the normal push-in type of stand, but it also comes with an extra extender piece to attach that makes sure that the wings and stand don’t get in the way of each other. It’s all detailed in the instructions included in the box, so just take a look there when putting it together! 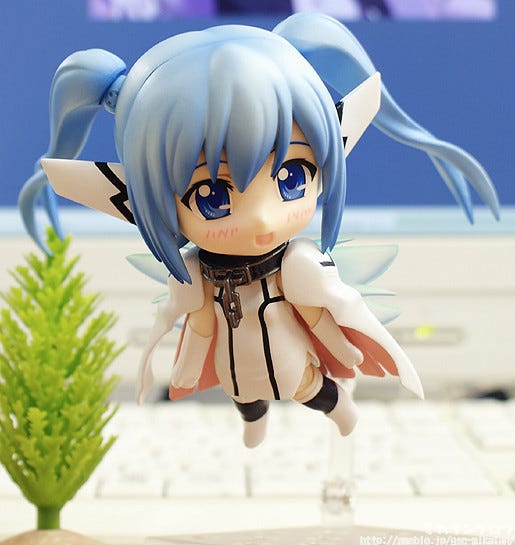 You can pose her flying though the air!

A quick note now that we’re moving into the colder Winter months…
If you can’t get the wings on, just heat them or the figure up a little and it’ll become much easier to attach them!
Just warm them with your hands, or quickly put them underneath a kotatsu to warm them up and it becomes much easier to work with! 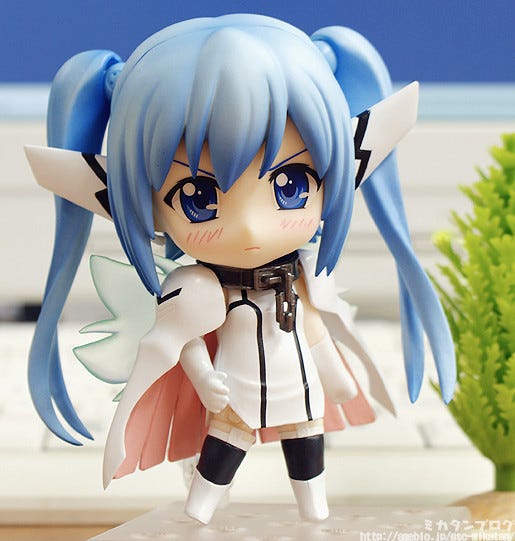 Nymph is of course the kind of character that shows this kind of expression very often 0 and while she does look upset, it’s also so cute to see her like this – I just want to poke those cheeks! :P

In my opinion, the final version actually gives a softer feeling to this expression when compared to the prototype version, but I think the softer look actually looks even cuter! Great job production team! 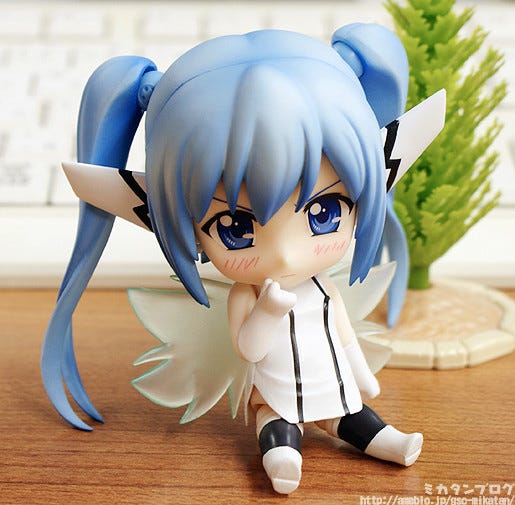 Sitting down with an upward glance!

Her bottom actually kind of floats a little, so it’s not quite sitting – she is balancing on her twin tails! :P

As you can see, the cape can be removed!!
This allows even more of her skin showing, so it seems to suit the expression well! Just looking at this picture makes me feel all warm and fuzzy inside… but I promise it’s even better with the real thing! 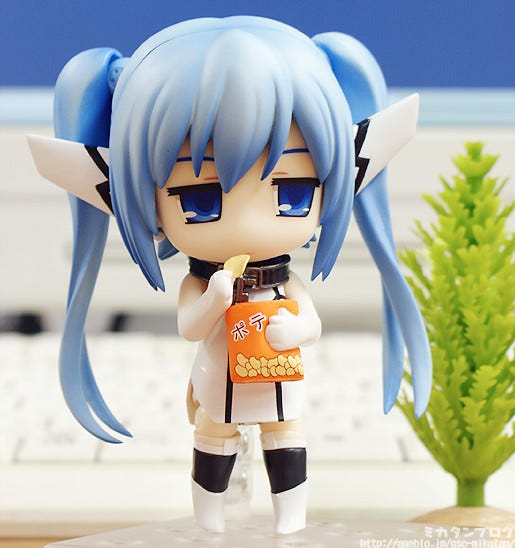 Her chibi face and a packet of chips!

Fans of the show will know just how much Nymph loves snacking on things, so of course she has to come with something to snack on, along with hands to hold it!
And my best thing about her – this expression!!
Ikaros also had a similar expression – isn’t it just adorable! It suits the Nendoroid size so nicely! 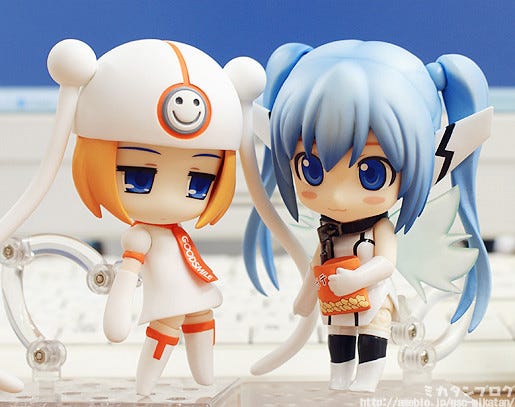 Both of them have blue eyes, so it actually works very well to exchange the expressions! (It would work with Snow Miku as well!!) The eyebrows do give it away a little, but those who are willing to make some changes can easily create all new expressions either way.  I must say that I really like the laid back pose that Gumako is in here! xD 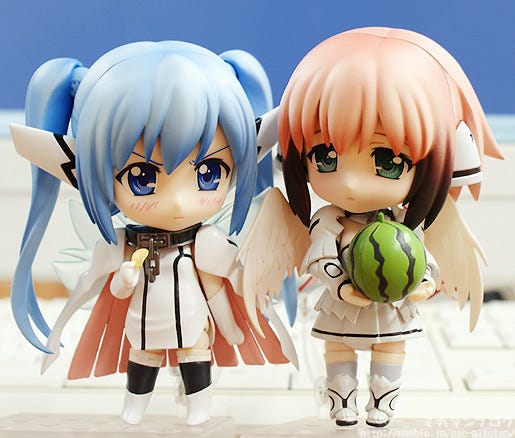 These two just have to be displayed together!

The pastel coloring and the contrast of the blue and pink really look great together! Well, they are after all from the same series :P 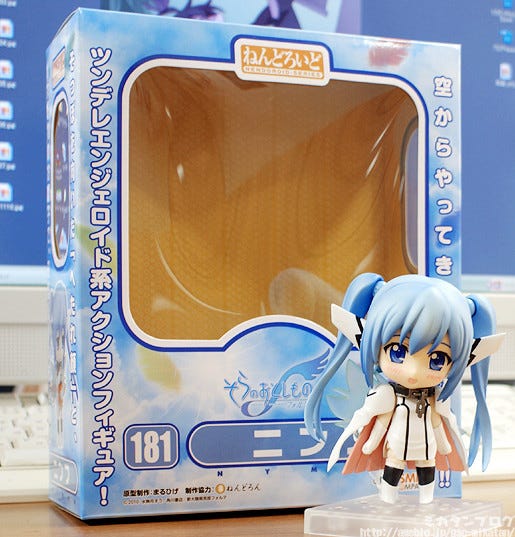 She’ll be in stores from the 24th!
Be sure to check with out partner shops if you have any order or sales queries!


Anyway, thats all for today!
I hope to see you all again tomorrow!! (・∀・)ノ゛