Another pre-release sample to play with!! 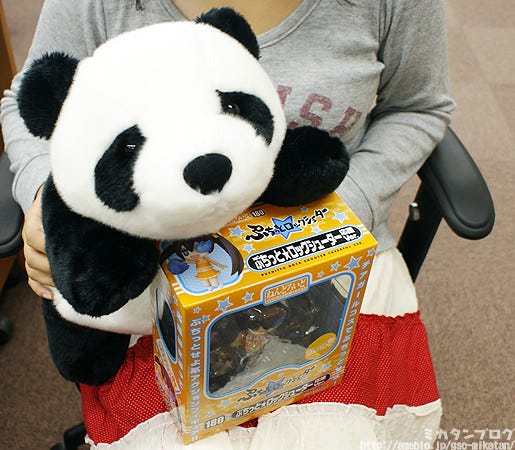 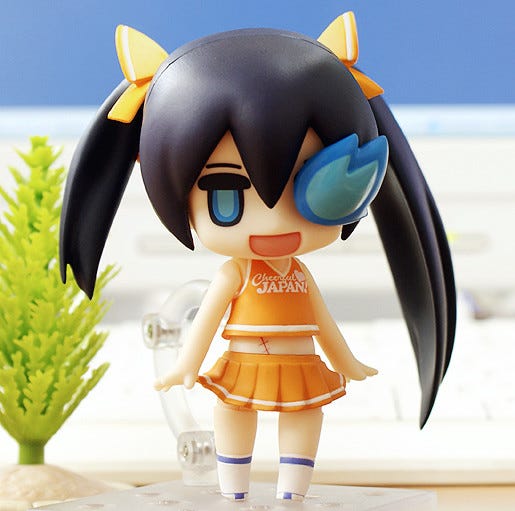 So today we’ll be taking a look at this figure!

The Second Part of the Cheerful JAPAN! Project! She is wearing a lovely bright orange cheerleader outfit which is such a great energetic color to bring a smile to everyone’s face – she also has matching ribbons in her hair, which can be removed if you’d prefer not to have them. She also of course has joints in her twin tails they can be posed in all sorts of directions! 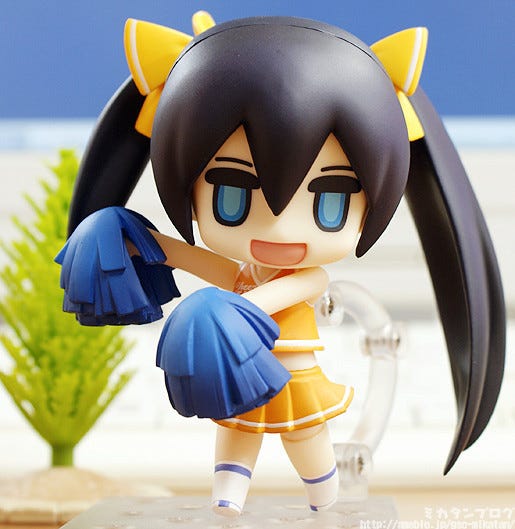 The well-known ‘cheerful’ parts are also all included!

First up are pompons and arms to hold them!

The pompons for Shooter-chan are the same brilliant blue of the flame that you can place over her left eye! The pompons included with her are also a different sculpt to those included with the Vocaloid: Cheerful Ver. figures, so there is some variety in that sense as well! 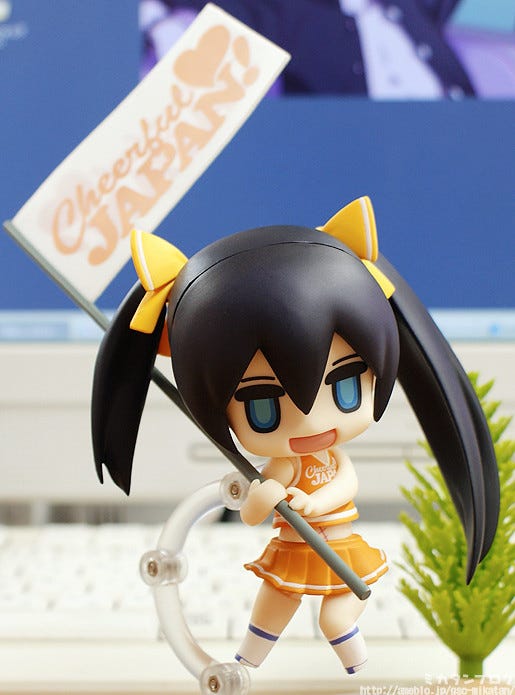 A support flag and arms to hold it!
The flag has the Cheerful Japan! logo plastered on the front – and Shooter-chan can wave it around to let everyone know she is cheering for Japan!

If you combine the flag with the bent legs it makes for an even more energetic pose! I really think this shot makes her look super cute! 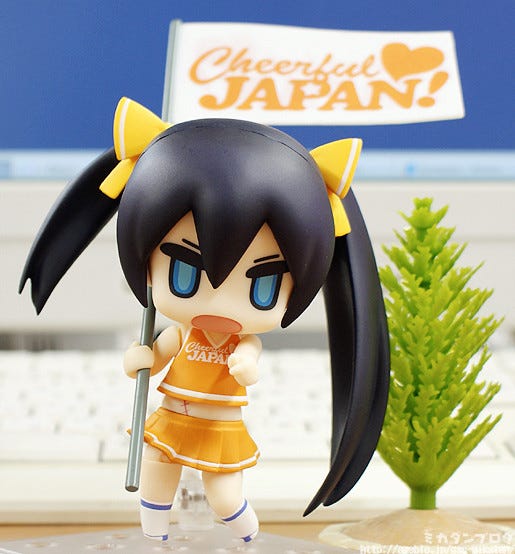 She also comes with an alternate expression!

You can use this expression together with the standard Nendoroid Black Rock Shooter to recreate battle scenes of Puchitto Rock Shooter! :P

Of course you can also just use it with the cheerleader outfit like above, it’s like she is telling me to work harder! Right – time to get to work!! 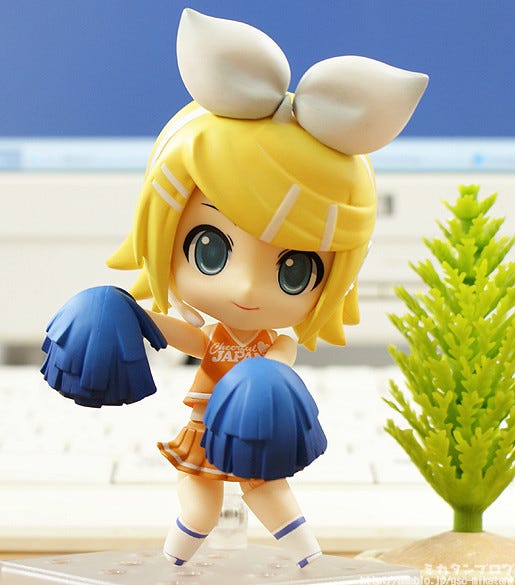 Rin is trying on the new cheerleader outfit!

Although… Shooter-chan has a scar on her chest which might make some people wonder what happened to Rin…. I’ve carefully placed the pompons in the way, so that’s definitely one way of dealing with that problem. :P 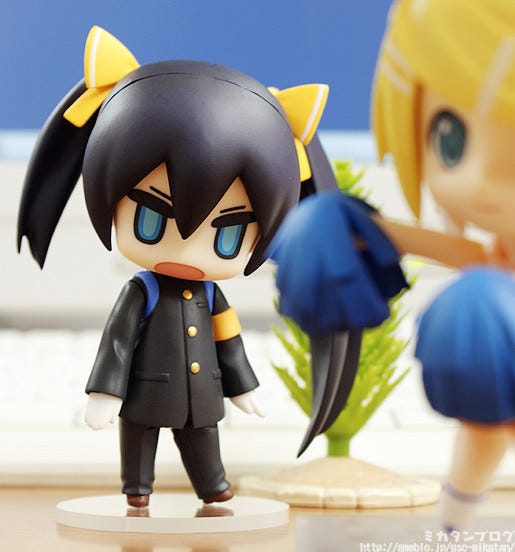 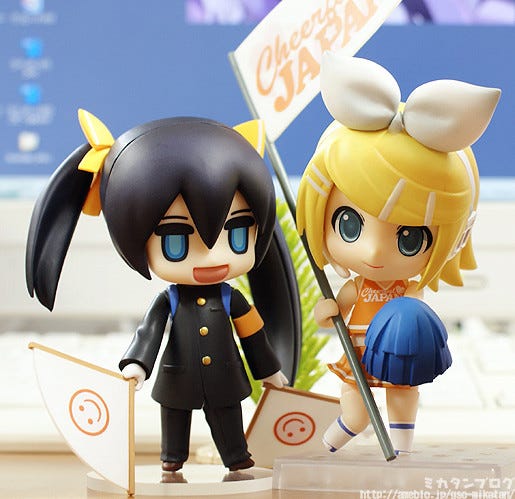 When your best characters are all dressed up to cheer, you really do feel energized looking at them!

As I mentioned before, the outfit Shooter-chan is wearing here is from the Nendoroid KAITO: Cheerful Ver..

Along with the new outfit and cheerful items he also comes with everything from the previous Nendoroid KAITO! He was also made into a cheerful version as we knew he was well overdue for a resale, an only costs 3000JPY – plus for each sale made, Good Smile Company will donate 1000JPY to aid relief efforts.

You can order Nendoroid KAITO: Cheerful Ver.  until 20:00 JST on the 27th of October! 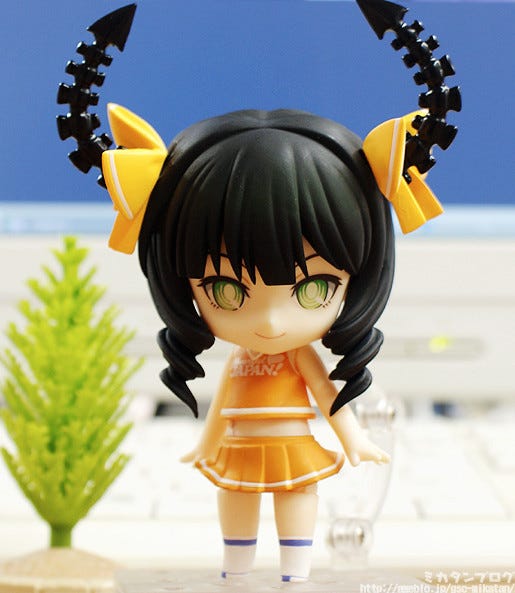 DM-chan! You look so adorable!!

I was wondering how it would look to put the ribbons on her horns – I think it’s come out quite nicely! But they really are just balanced there at the moment and will fall off very easily – I’m sure some double-sided tape could fix that up though! 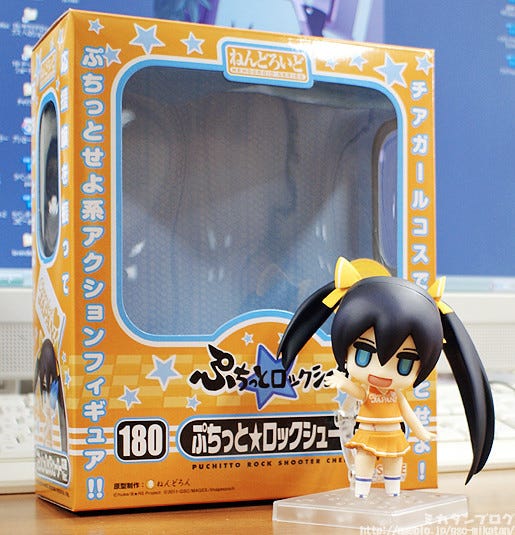 Part 2 of the Cheerful JAPAN! Project:

She will be sent out to those who ordered her from the GSC Online Shop on the 27th October!

Just be patient a little while longer – she’ll be with you soon!