The Miku Hatsune BMW is the Season Champion of the 2011 Super GT! 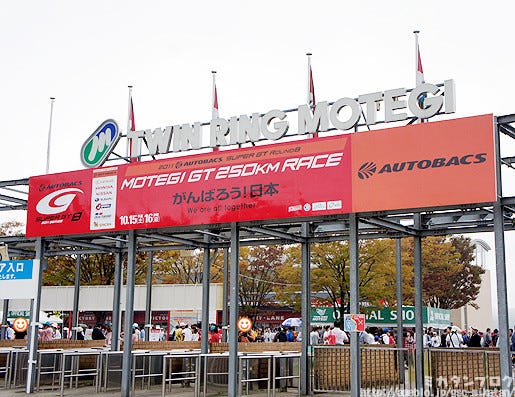 The Finals of the SUPER GT!!

There might be some of you that may be wondering this… but it really was a nail-biting start right from the entrance for all of us!

Wondering whether our Miku 2011 SUPER GT will be able to take gold in the final race!

Let’s take a quick look at how amazing this race is – for each race, the higher you rank in, the more points you receive. The only problem is, the more points you have, the more of a handicap you receive in the following race.  There are 8 races each year, and the team with the most points at the end will be the champions for that year. Our Miku has managed to pull first place positions twice this year, so it was all up in the air as to whether or not she would be able to take the champion title for this year’s series. 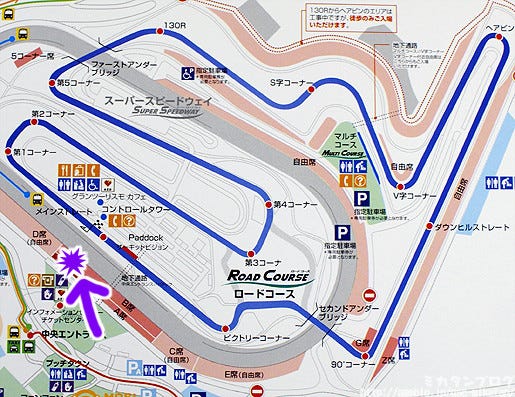 An overview of the race course!

The cars obviously all drive along the blue line on this map. As I only ever really play the games I thought the course seemed fairly small – but it really isn’t – it actually covers a huge amount of space!

First off we went to the area shown in purple! 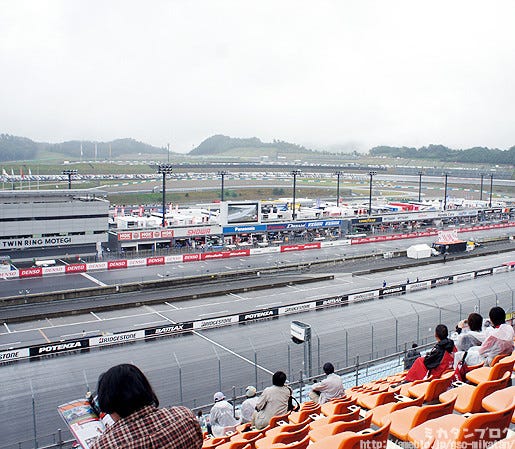 The seats just at the finish line!

Hmmm… these seem like very high quality seats that should be used for the most dedicated fans… and here I am as a complete amateur. The seat even had ‘VIP’ written on it… I’m so sorry everyone who wanted these seats! xD

But I promise that I’ll be cheering as much as I possibly can! 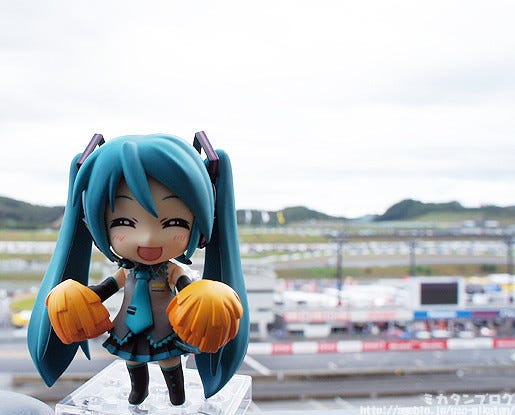 Miku is also here to cheer on!

It was cloudy with little drizzles of rain the whole morning. It was also rather humid and not really the best weather for an event like this… but looking at the Miku car’s track record, rainy days always gave her the upper edge!

If the rain allows Miku to win, then I’ll gladly pray for even more rain! :P 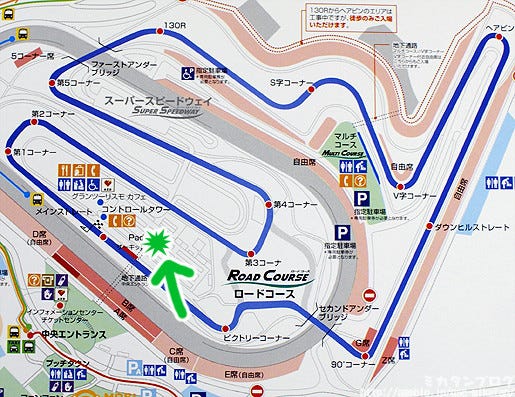 Next up we moved on to the pit area!

The pit is where all the cars for the race are held! (I think… :P)

It looks so close on the map, but it was quite far to walk!

It must have taken about 10 minutes to walk from the seats before down to the pit area. (You need to go underground, so some of that is also climbing up and down…)

It makes me wonder how long it would take to walk around the entire course… :O 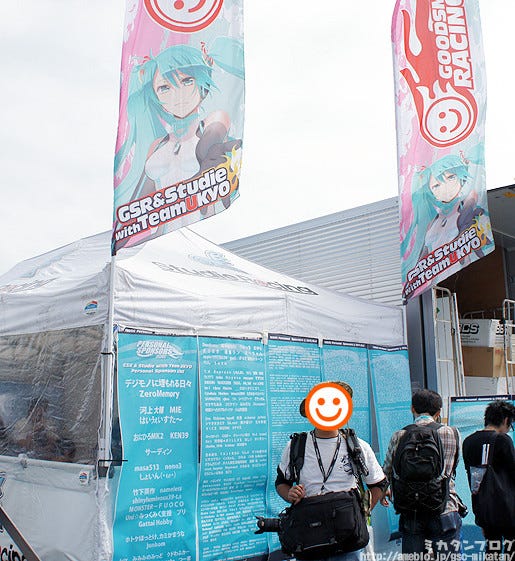 This is the behind the pit area!

Very close to the pit is this tent where all the people involved can watch how the race is progressing. All the personal sponsors of the Miku car are also all written up here for everyone to see!! A huge thank you to everyone who helped with the sponsorship! 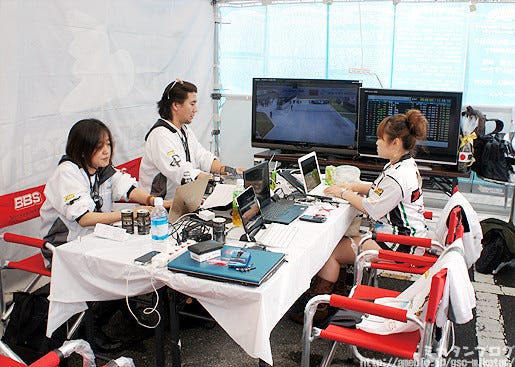 This is how it looks inside!

Aki and Emi are hard at work it seems! The championship title is up for grabs, so they’re all putting their absolute best into this one! 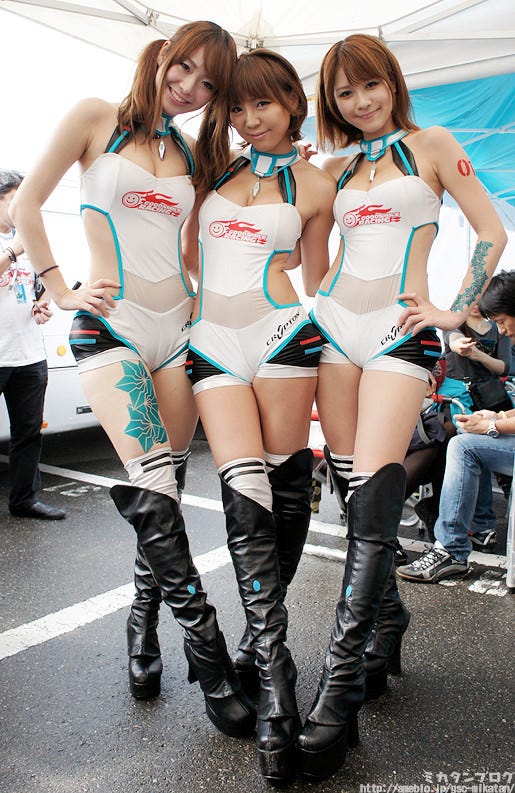 These three have come to support Racing Miku and add even more to the upcoming race! The outfits they’re wearing are of course the same that Racing Miku wears! They are so very cute!! 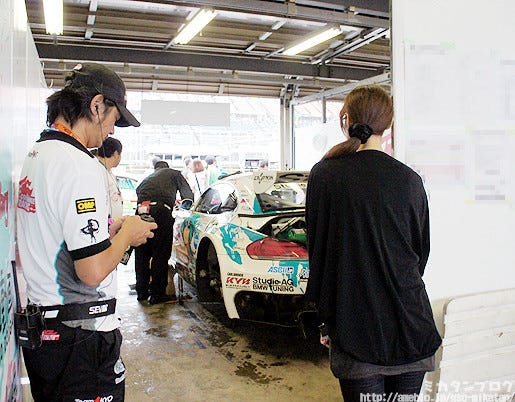 Let’s rush down to the pit!

The Miku car is being prepared!!

I really didn’t want to bother anyone before such an important race, but I did grab permission to take a few pictures! Thanks –  you won’t even notice that I’m here!! 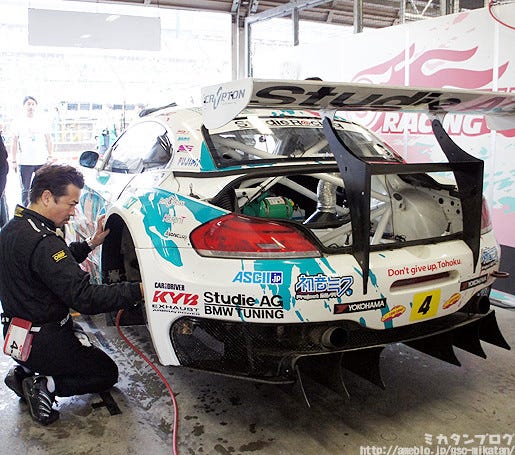 The tires have not yet been put on, and all sorts of parts still seem to be missing. The mechanics are really trying to make sure that there are no problems, so Miku can race in her very best condition! Just look at the serious expression on the mechanic’s face! 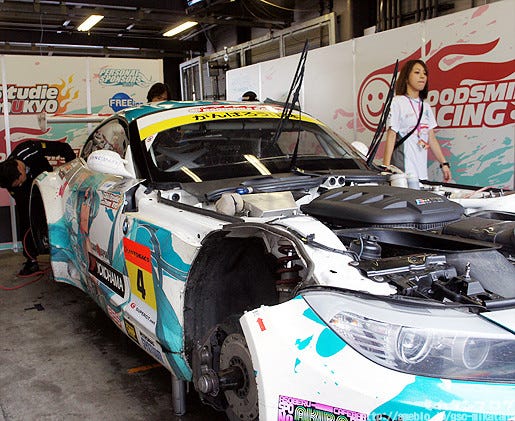 And a look from the front end!

The Miku car is car number 4!

In just a few hours she’ll be dashing out into the race! Good luck, Miku!! 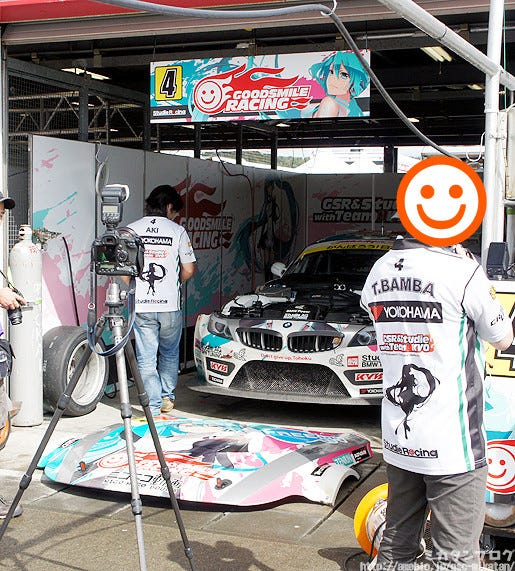 The front area of the pit!

I must say that the pit area is a lot smaller than I expected…! In such a tiny area the mechanics have to work without error as fast as possible… the pressure must be really intense. It also really shows that the race is also a lot about teamwork as well. 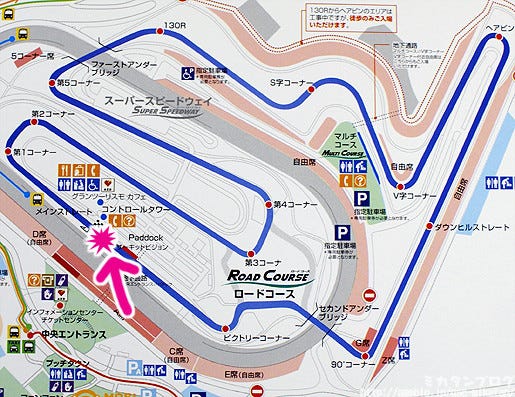 It’s time for the pit walk!

During the pit walk time, you can walk around the pit areas and take a closer look at your favorite cars. 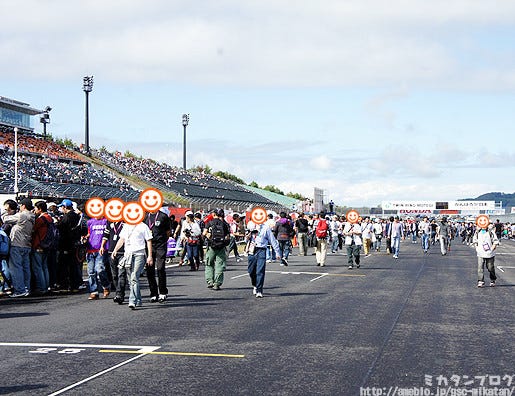 The left side of this photo is filled with people because each team’s race queens are all lined up and everyone is free to take photos! The three Racing Miku Supporters were super popular!! 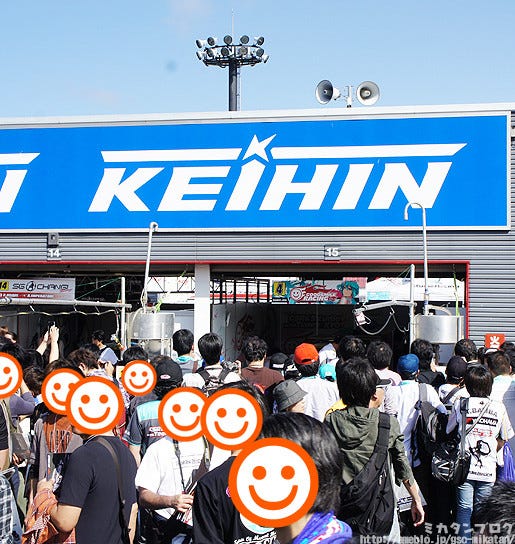 Look how busy the pit area was as well!

It was actually really hard to even move around… so many people can to take a look at the Miku car! I hope that all this support will give Miku the power she needs to win! 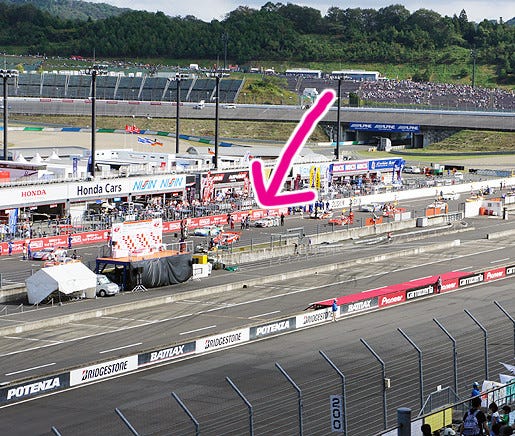 The race is about to begin!!

Can you see the Miku car? The arrow is pointing it out!

In the preliminary yesterday, Miku placed first giving her pole position for this race!

Pole position allows Miku to be in the very front position of the race. In the photo you’ll see a few other cars in front of her as well, but they are GT500 cars. Miku is a GT300, and is in front of all the other GT300 cars. 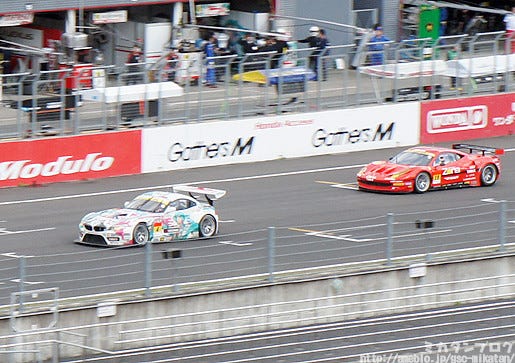 The race has begun!

I was really worried I wouldn’t be able to get a clear shot of the Miku car during the race because it was moving too quickly! I’m glad some of the pictures managed to come out nicely… :P

The red car behind Miku at the moment is #11 – Miku’s rival car who also has a shot at the championship with this race! Don’t lose Miku! You can do it! 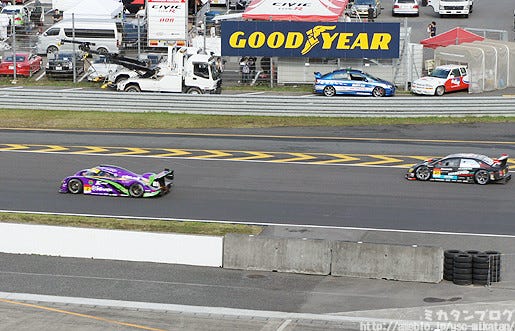 There were other itasha racing cars along with Miku! The Eva one you can see here, plus there is also the Ika-musume car that was in this race! 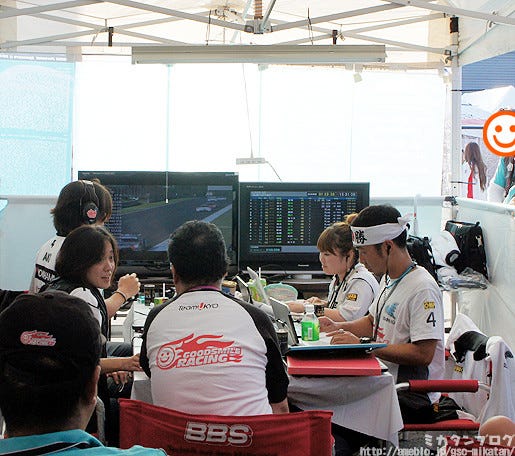 The race is mid-way, let’s check out the back!

Miku hasn’t lost first place once yet, and the staff are all working hard and keeping their spirits as high as possible to continue cheering on the team! The twitter team is also sending out tweets letting everyone know how the race is progressing for Miku! 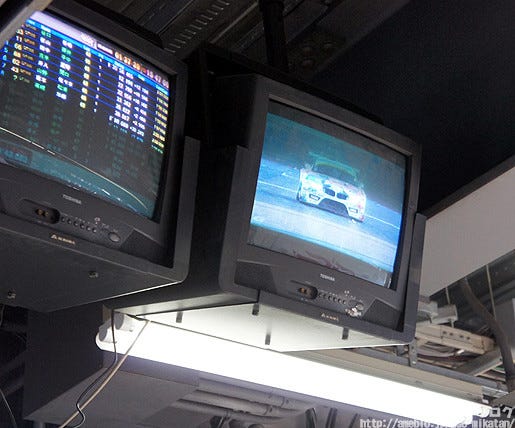 Almost at the finish line!!

I went with the rest of the staff to the pit to see the final stretch!

The Miku car is the first one to appear! 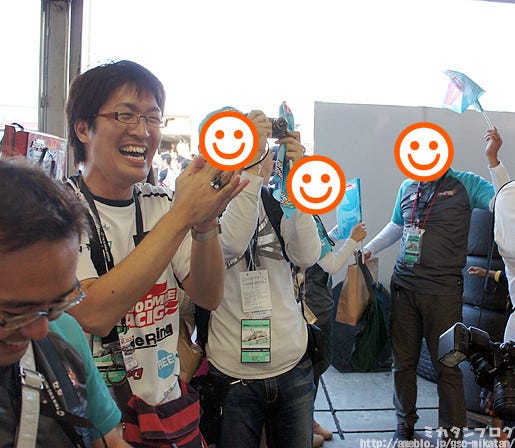 The 8th race ends in victory!! The champion for the series has been decided!! 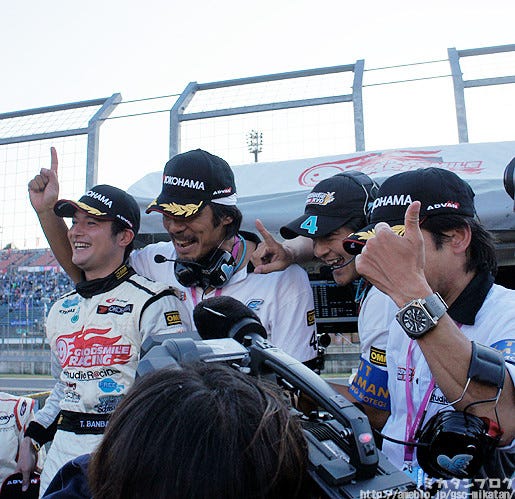 Banba, the driver, Suzuki, the team representative, Oohashi, the director and Ukyou Katayama!

Just look at the smiles on their faces!!
What an amazing victory for everyone on the team! Thank you so much! 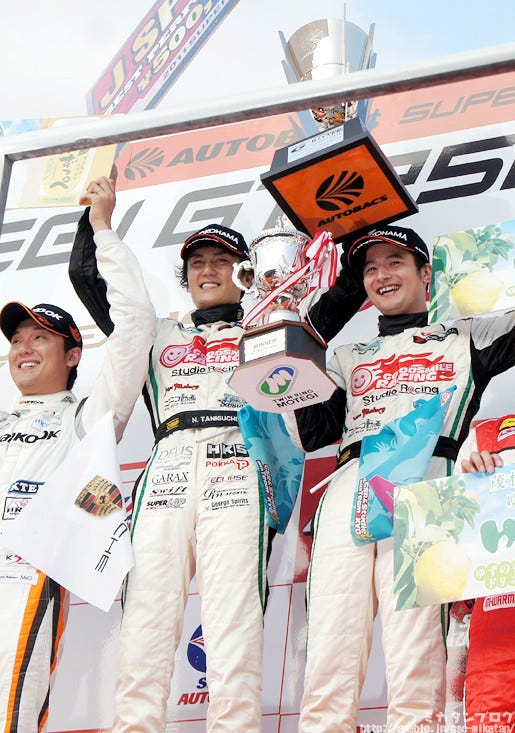 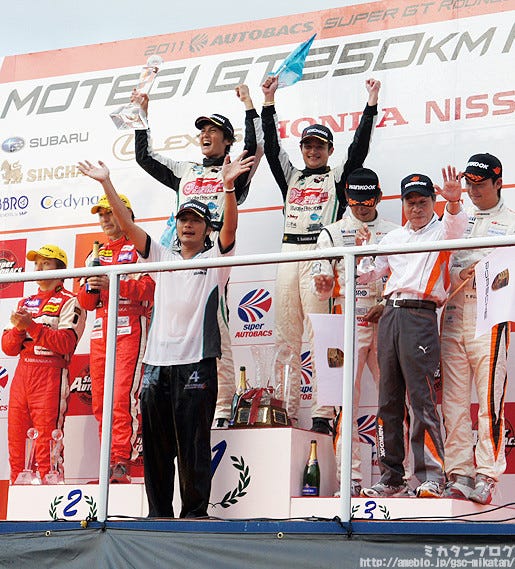 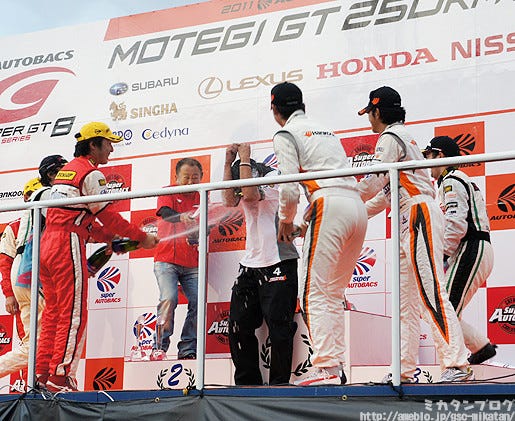 The director enjoys some champagne!

The fellow teams that competed against them were also there to join in the celebrations! Even the rival red car #11’s team was happy to join in the fun! 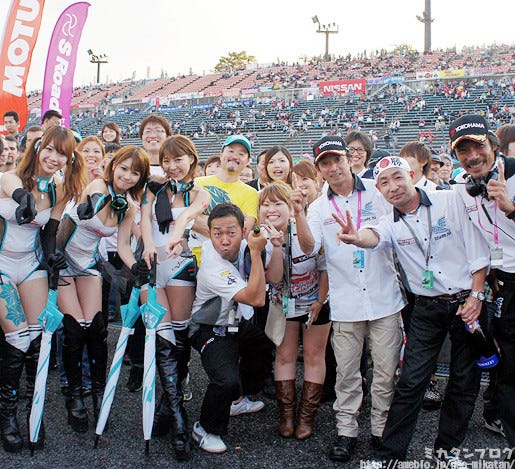 After four years, the team has finally come out with the best possible result!

A big thanks to everyone on the team, all the Good Smile Racing staff and all the personal sponsors for the team – this is all thanks to you!

I really cannot thank everyone enough for all the support the team has received – even those who have simply been cheering on from home, thanks to you as well! Good Smile Racing will continue to work to their very best thanks to all

There will also be some print races on the 11th and 12th of November!
Our team will be competing there as well, so I hope you’ll be cheering for them!

But that’s all for today!
I hope to see you all again tomorrow!