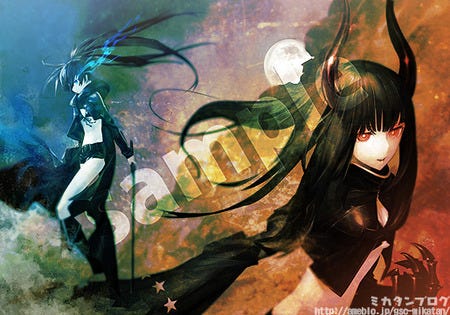 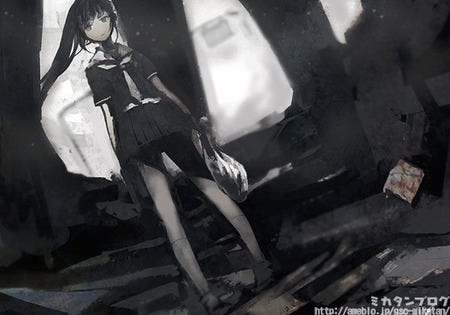 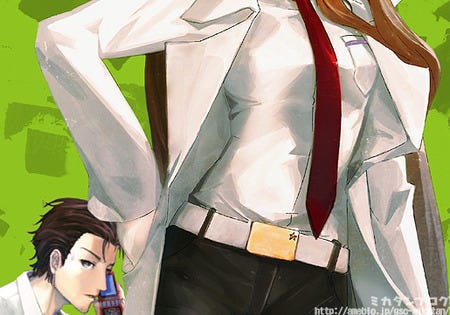 And it will come in two different editions.

(ﾟдﾟ) BLK Limited Edition (With figma BRSB)
→ The art book plus a figma, which will sell for 6800JPY. 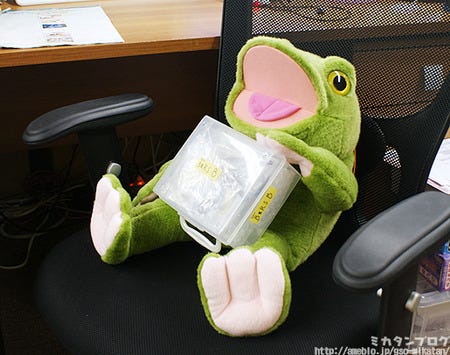 Today I’ll be taking a look at the included figma BRSB!

Master figures of figmas are very fragile so I can’t be too bold with my posing, but I’ll try my best! 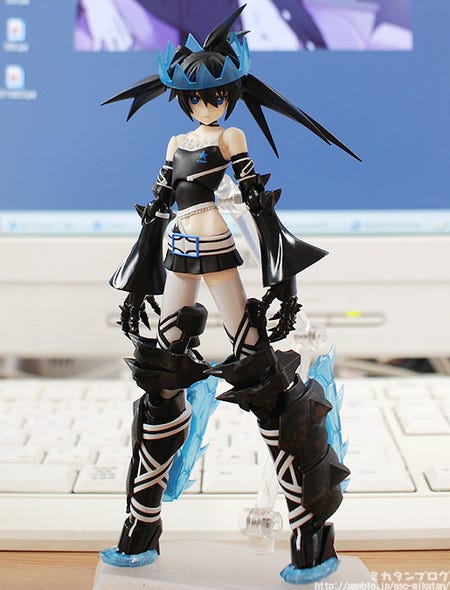 huke is the creator of Black Rock Shooter, but also famous for his character designs in other series such as the popular Steins; Gate – his first ark book ‘BLK’ brings all his work together, and to commemorate it’s sale will also come with this figma of another of his illustrations – BRSB! (Black Rock Shooter BEAST) 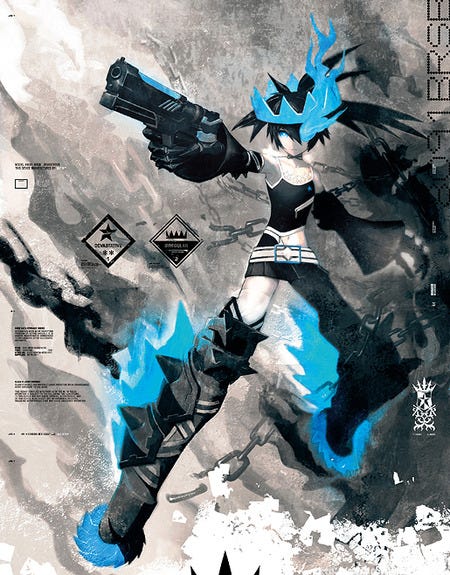 The mysterious BRS on the front cover of the art book is in fact BRSB!

You can see the illustration above! I do wonder how exactly she differs from the normal BRS-chan… I guess maybe she is more wild and ‘beast’-like as the name suggests? 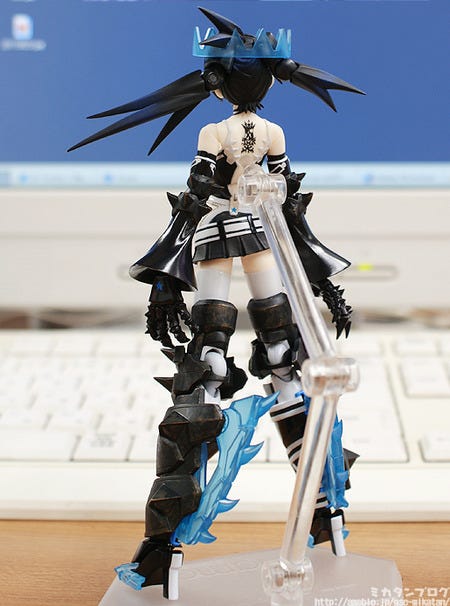 Isn’t that a skirt…? Plus it looks like if you opened that zip the skirt would just fall off! :P I also really love the legs – the futuristic look suits her really nicely! The tatoo design on her back also adds a nice sexy feel to her! 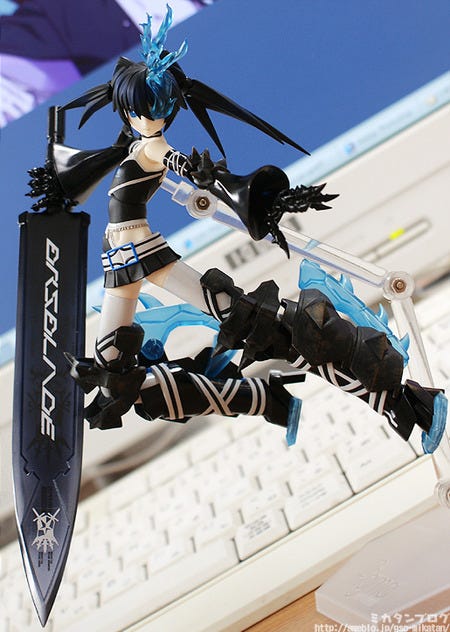 A giant sword – the BRS Blade!

It’s absolutely humongous, and when BRSB-chan holds it she looks awesome!

She also has a blue flame on her eye like BRS-chan!

By the way, the crown thing on her head can be removed, but it will leave a little hole where it attaches – it doesn’t really stand out though, so it shouldn’t be a problem. 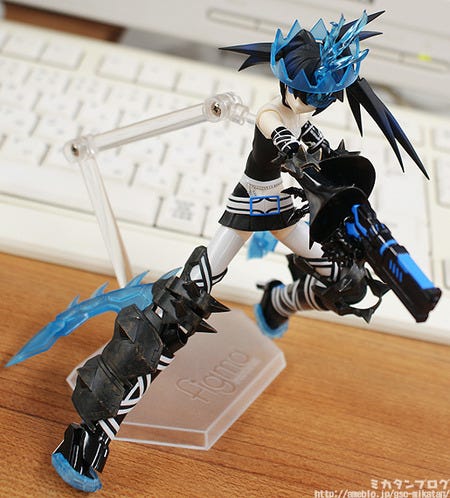 The ‘Seven Shot’ that featured in the illustration!

Plus she has special hands just to hold the huge gun as well! I think I’m doing pretty well with the poses for once – it’s so easy to pose! 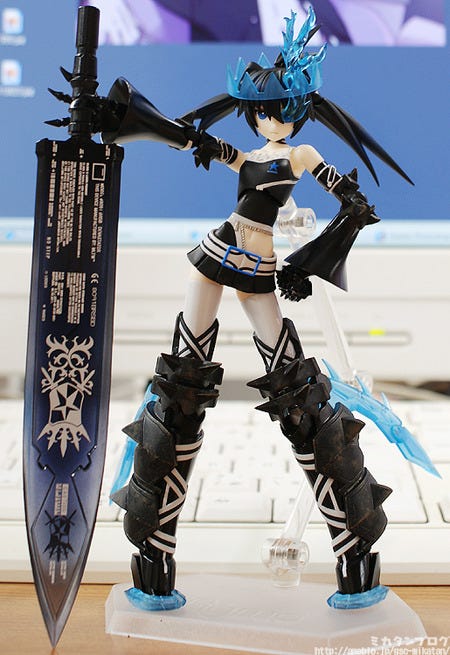 The back of the BRS Blade is incredible!

Look at the minute detail on the patterns and writing!! This has to be my favorite picture for today – she just looks so cute there! 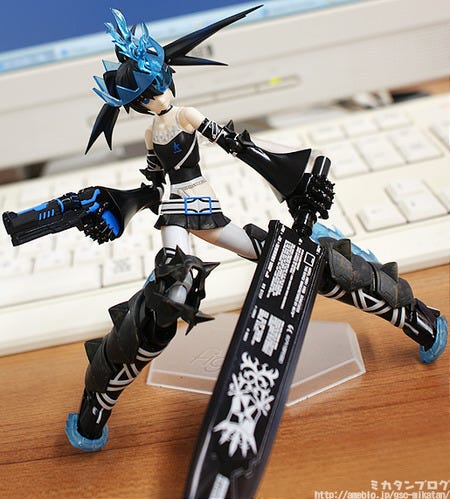 She can even hold both at once!

There are a load of extra hand parts included which even let you do things like this! The spiky bit on her knee also has joints put in it so it’s easy to get into a pose without struggling. 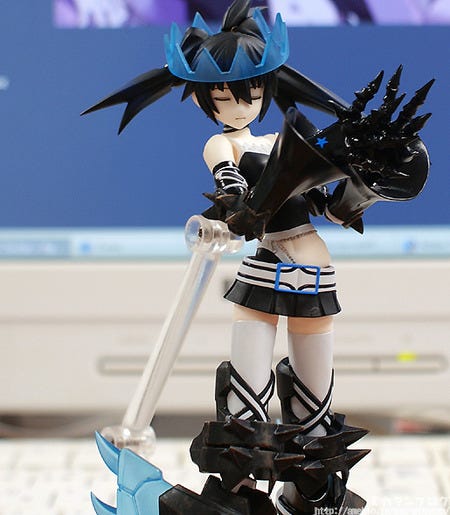 An expression with closed eyes!

Her mouth also looks tightly shut as she is deep in thought… another cute expression!! The blue flame can also be used on this expression! 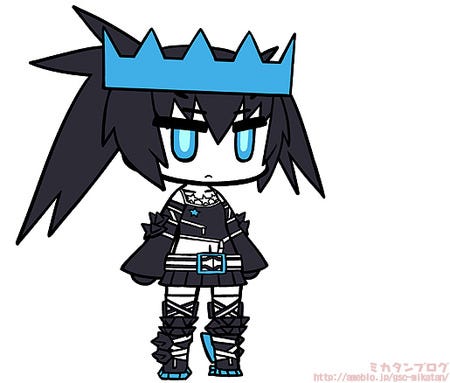 As another bonus to getting the BLK Limited Edition…
You’ll be able to get a BRSB Avatar in Puchitto Rock Shooter!!

It’s a lovely avatar illustrated by the popular CHAN x CO! For those not playing Puchitto Rock Shooter, you should give it a go – it’s a lot of fun once you give it a try!

For preorder and sales info, check out our partner shops! 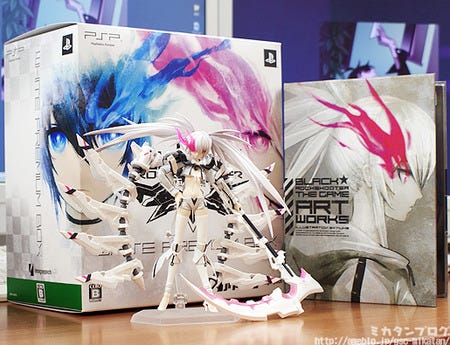 You’ll finally be able to give it a go, I’m sure it’ll be worth the wait!

The picture here is of the
Black Rock Shooter THE GAME: White Premium BOX!

It’s a limited edition with figma WRS, BRS Artworks and the Limited Soundtrack  all included! Must have products for fans! 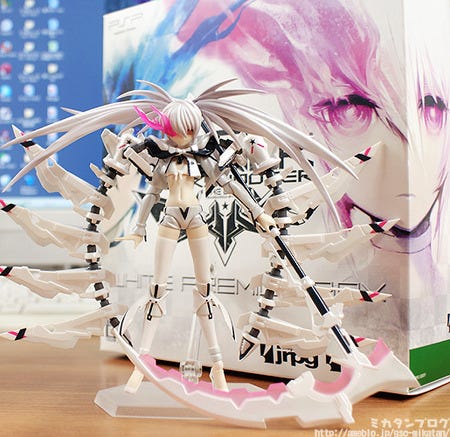 Just who is WRS-chan??? If you keep the figma by your side while you play the game, you might figure it out! :P

This figma really had a lot of work put into it by Gakkun from the production team! I’m sure you’ll all be very happy with it when it arrives at your homes! 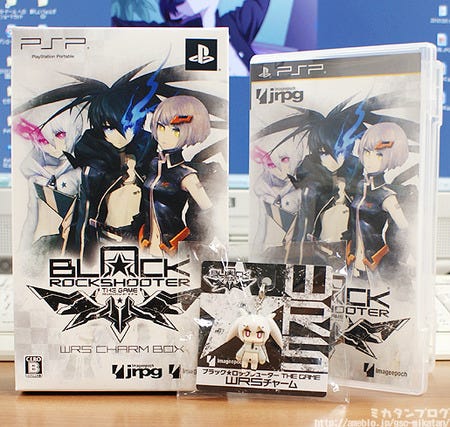 This special first print edition comes with a little charm based on one of CHAN x CO’s illustrations of WRS! This one is cheaper than the figma set, so have a discussion with your wallet and then decide which one is for you!

But Black Rock Shooter is only getting started now!
Next year in January there will be a TV anime of it on noitaminA!!

A few years ago I interviewed huke in a cafe in Akihabara… It didn’t seem like such a big thing at the time… but now…!!