It’s Monday, and already August! WonFes has come to an end, but Good Smile is already well on it’s way with preparations for Chara-Hobby and Anisama which are coming at the end of this month!

Our advertising teams are working hard for the events, and as soon as more info is known it’ll be up on the GSC site!

In a blog not too long ago, I asked you all for your Miku messages! 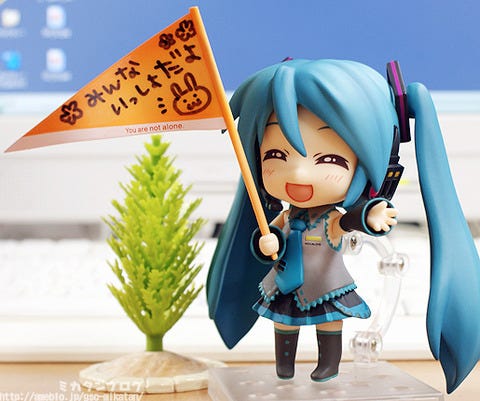 I wanted to collect images of people’s messages they wrote on the transparent sticker that came with Support Miku!

Support Miku was a product released to support the relief efforts in Eastern Japan, and I hope that in some way the proceeds have managed to make a difference in the lives of those in the disaster areas. I’m also certain these messages will bring a smile to some faces!

I’m always reading your blog, so I decided to send through my support message! It’s not a great picture, but I hope the message reaches all those in the disaster areas, including my friend in Hachinohe. I’m sure that Miku’s smile will be able to bring a smile to everyone in Japan. 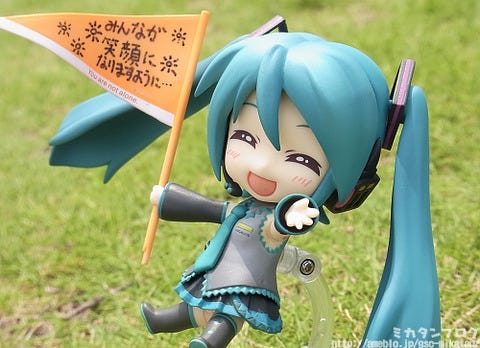 My Miku is glad she can help encourage those in need! I pray that Eastern Japan will recover as soon as possible! 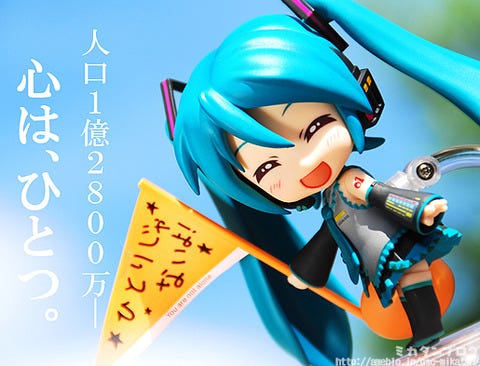 This support message comes from Oumigawa Station in Niigata Prefecture. This is one of the many places that was badly affected by the Chuoetsu offshore earthquake four years ago. (The uneven looking cliffs to the left are one of the few remaining traces of the quake.) The station was a complete mess after the quake – covered in sand and dirt, but now it’s back up and running just as well as ever. I’m certain that Eastern Japan will be able to recover just as well as this – it definitely affected more areas, but over time it will recover and be better than ever! 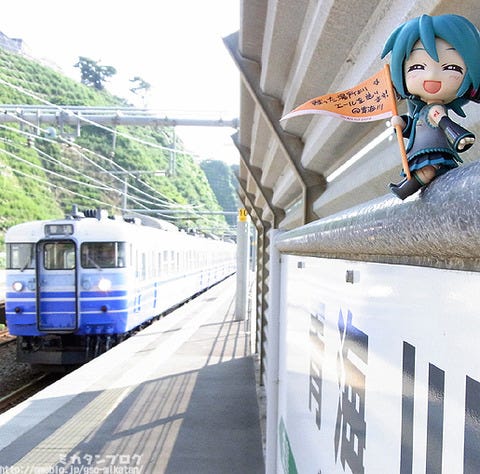 I’m sending though my photo of Miku with her support message! 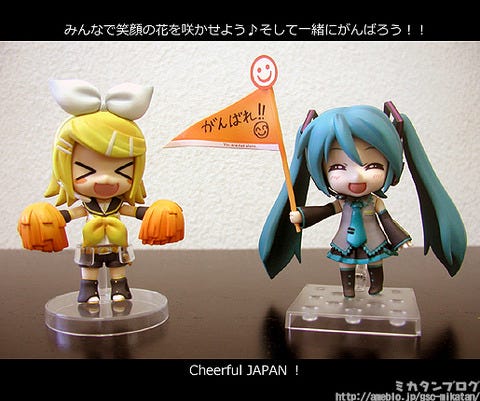 I pray that Japan will be able to recover through the power of song and smiles! 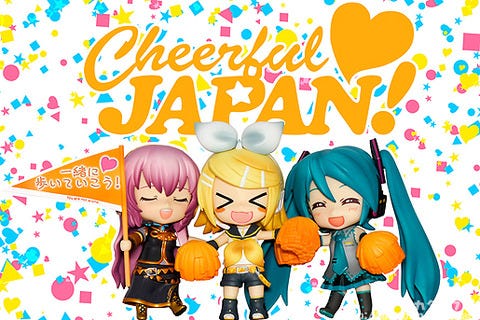 Nendoroid Luka: Support Version!  Luka wanted to support just as much as Miku did! 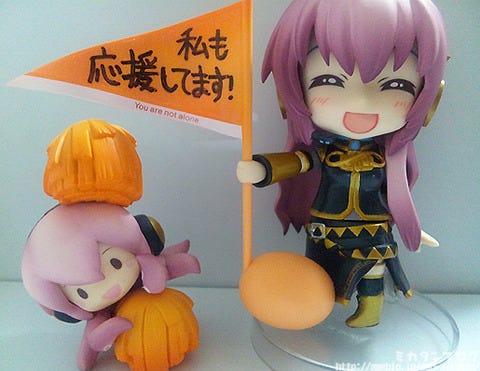 The earthquake this time around really was horrific. I live in Tokyo, and can’t believe that such tragedy was happening so close to me. I was wondering what I could possibly do to help a little, and then heard about this Support version of Miku. To be able to grab a Nendoroid and still be helping out where help is needed was great. Thanks so much for the opportunity, GSC! I have sent through my support message photo as a thank you to GSC as well as a thought to those in the disaster areas. “Even if we’re apart, we’re always one. We’re always all looking up at the same sky.” 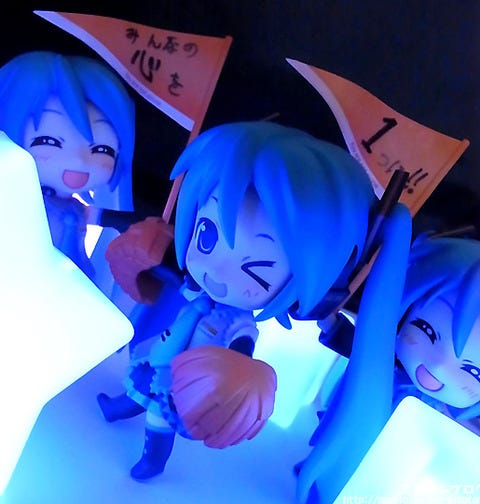 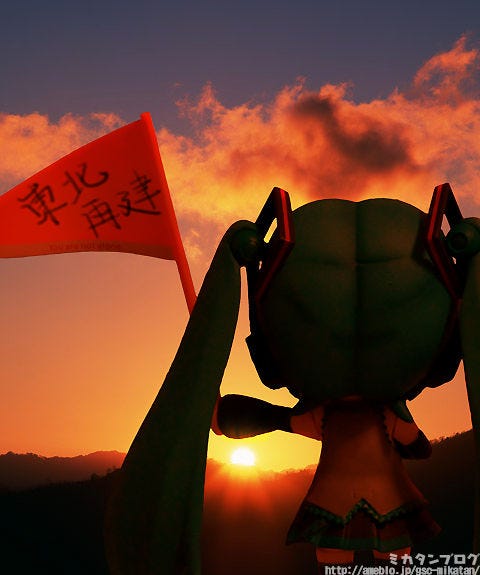 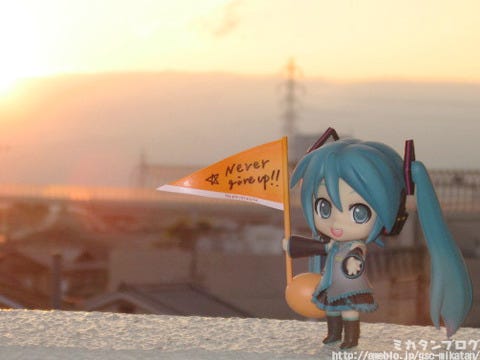 Two Miku’s together! :P The flag is written with the thought that no matter how hard things get, you should always keep your spirits up! 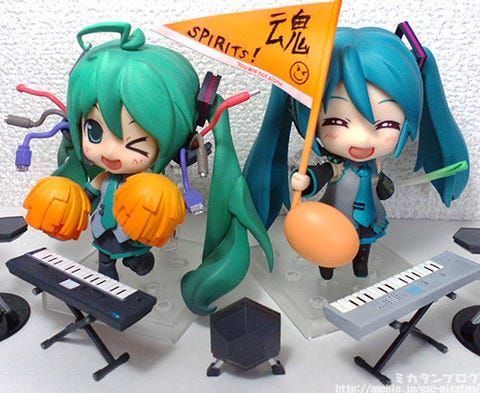 It’s nice to meet you! Even though I’ve known you for ages! ^^; I think this is the perfect message for your blog! :P 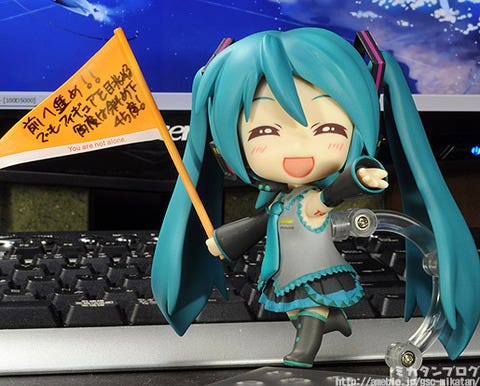 I’m from Taiwan, but we’re all in this together! 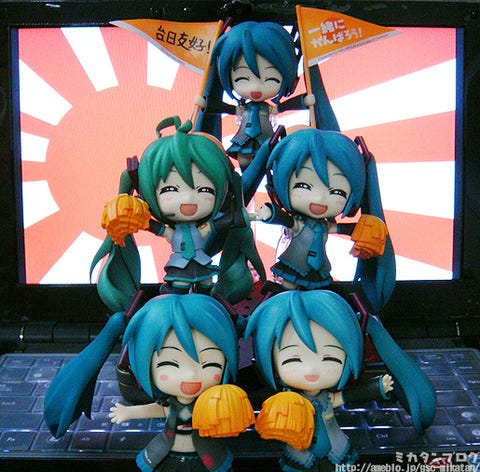 “Let’s all get through this!”
Things might look bad at the moment, but Japan will get through it and smile once again, I’m sure of it! 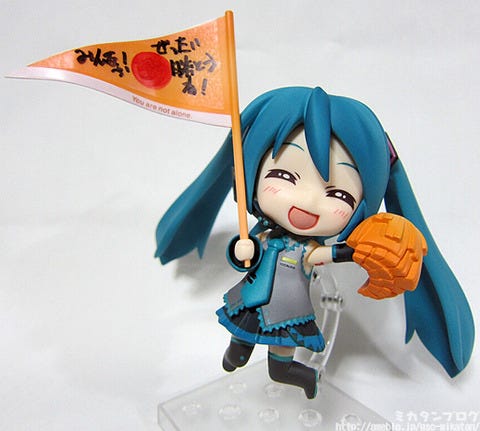 Here is my entry for the support messages! The character in my photo is a mixture between Kuroneko and BRS – “Black Cat Shooter”!
I hope that Japan will be able to recover quickly! 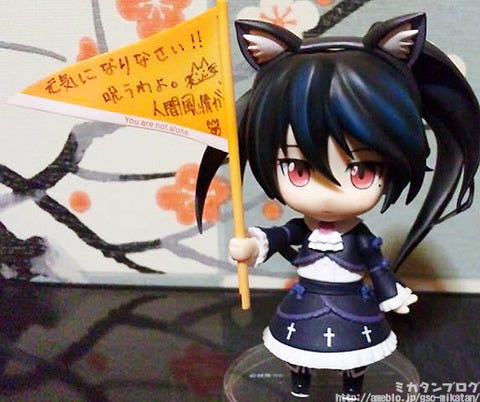 My Support ver. Miku got delivered the other day, so I decided to display her with HMO Miku – I’m sure the two of them together can get through any hardships! :P

My parents live in the 20km radius around the nuclear plant that is always featuring on TV, and thus have been moved to a city called Tomioka. I am living in Ibaraki prefecture, so I didn’t get hit by the disaster too badly myself, but my parents have had to rent out a new apartment. I went to visit them not too long ago, and all they had to say was ‘I’m really not sure if we can keep living here…”

I don’t want to abandon the place where I grew up! I’m sure that one day we will all be able to return! Good luck, Fukushima and Tomioka! 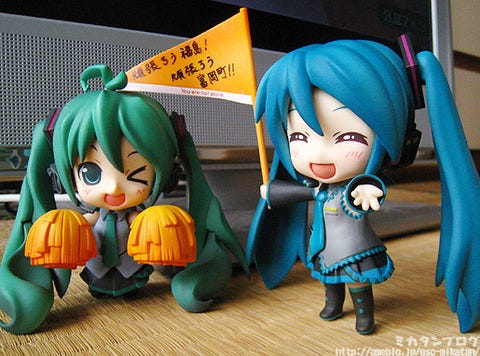 Sorry for the cellphone picture – I decided to use my hand as a base for the photo to go along with the message on the flag – “Let’s all hold hands and work together!” Holding onto others hands really is a nice warm feeling in times of trouble. I hope that the troubles in the disaster areas are improving each day, and that all will be back to normal as soon as possible!! 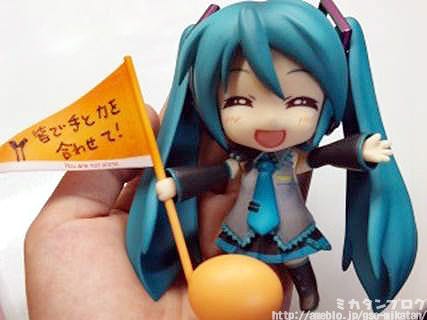 We’re finally into the rainy season which means summer is officially here!
A lot of Eastern Japan is still trying hard to conserve electricity, but I do hope everyone is still keeping safe and looking after their health! 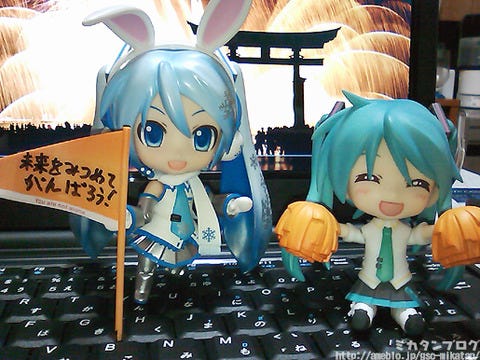 Support Miku has reached me safely with that giant smile on her face – I decided I had to take a support photo and after thinking for awhile came up with this one. Thank you so much for giving us this opportunity to help out the disaster areas! Japan will be better soon! 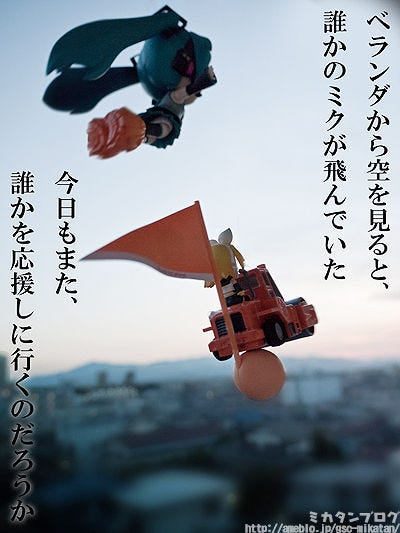 (If you look out to the sky, you’ll see someone’s Miku flying through the clouds – off to go and support someone else again!)

What a perfect charity plan! Not only are we helping out those in need, but they are made-to-order, so people like me will definitely buy! GSC, you are definitely the best kind of company there could ever be…! I had to send in my support photo as well! I hope Miku’s smile will reach all the areas that it is needed! 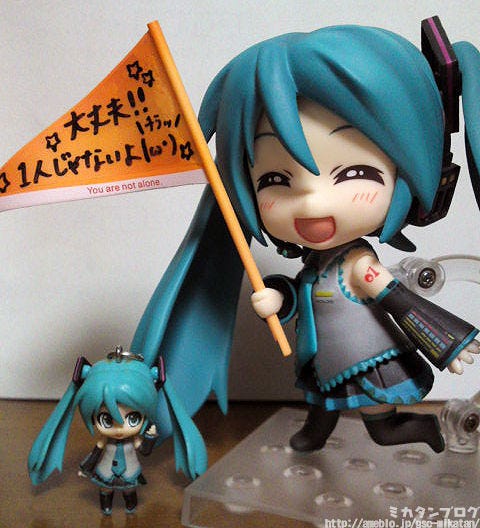 Hachune is dashing off to help out the relief efforts however she can! I’m sure a lot of people are having a tough time at the moment, but don’t worry – you’ll get through it! 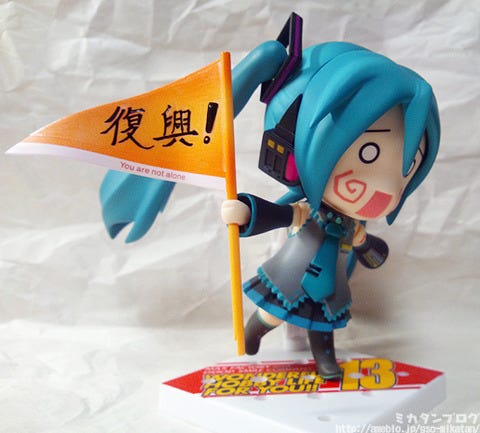 I hope that the support for the disaster areas will grow out like the summer grass – and I’m sending in my message to help it along. 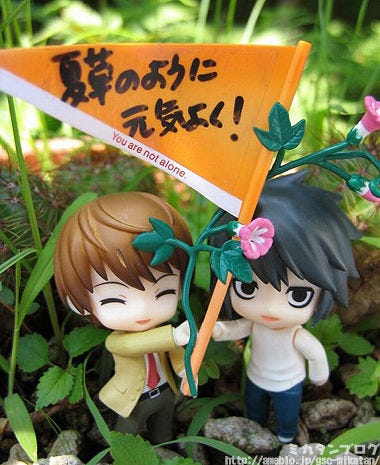 Stay strong, Japan! The background image is a rather messy water-color Miku that I drew. 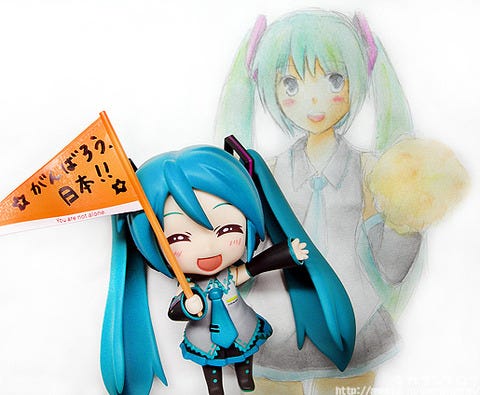 Here is my support message! I wasn’t sure if I’d send it, but seen I had taken it I decided I had to! 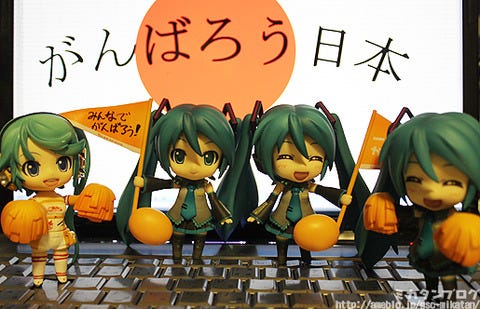 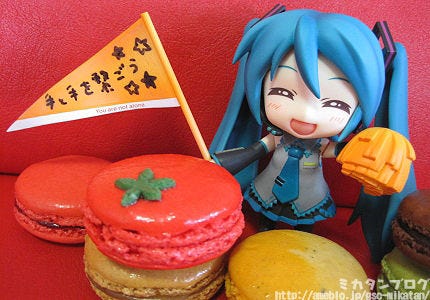 “Come back to us! Volks Sendai SR!” 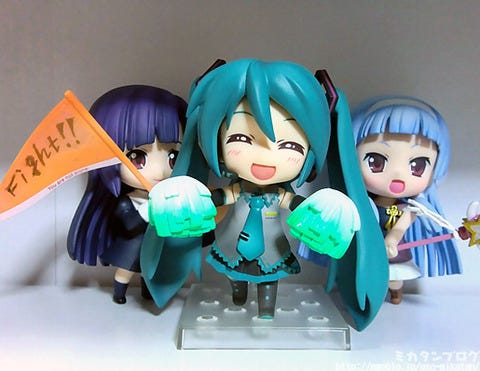 It’s just a cellphone picture, but my Miku is cheering on for everyone with a smile! 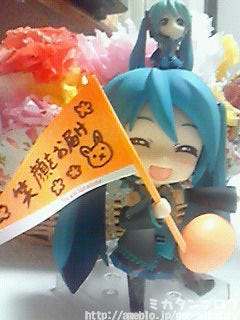 I can’t do much to help, but I can at least send though my support message! 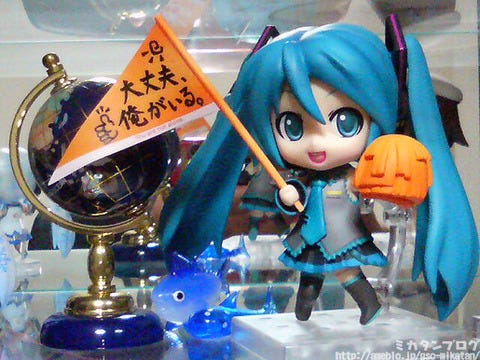 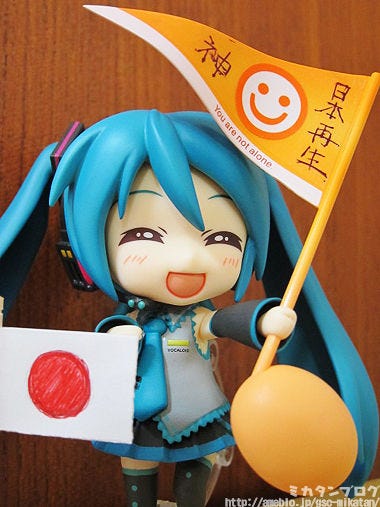 I’m sure there are still thousands of people that are suffering from the effects of the horrendous earthquake. I thought long and hard about what kind of photo I could send through with the hope that it might bring a smile to their faces, and eventually decided on this one. My mother does flower arranging as a hobby, so I borrowed the flowers from her – I hope they will help make people throughout Japan be happier with smiles on their faces! 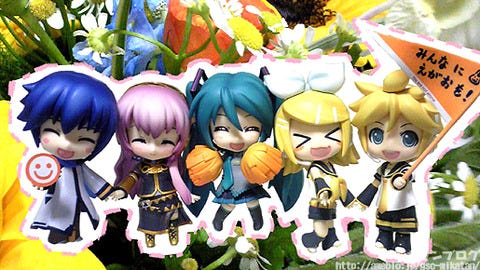 Instead of a text message, I’m just sending through an image as my support photo. If you raise a hand up, others will follow!

Thank you to everyone who sent in their support messages, and apologies to those whose I did not put up on the blog – there were just too many to put them all up!

It’s hard to find something to say to all the messages, but there is one thing I know for sure: If you believe in a wish or a prayer, it will always come true. Everyone’s wishes and prayers here will all come true, I’m sure of it!

But that’s all the time I have for today!
I hope to see you all again tomorrow!