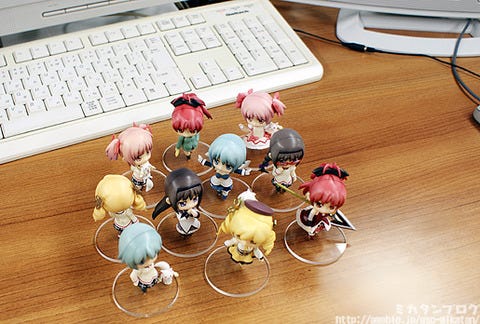 I got ahold of the painted versions!

These would be the master model figures, or ‘decoration masters’!!

Yep, they’re all done and ready for a review!
Plus they will be up for preorder as of tomorrow!

I’ve been wanting to review these for absolutely ages now, so I’m going to cover each figure one by one – there are a few more images than usual, so be prepared! :P 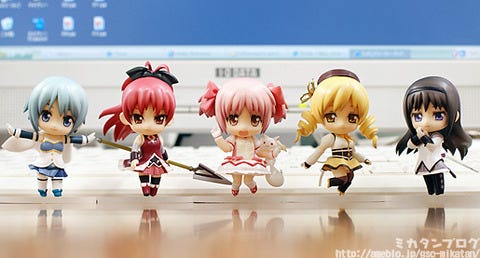 For those who don’t know, you can either buy single Nendoroid Petites for 500JPY, or you can buy a box set of twelve instead!

This Puella Magi Madoka Magica set comes with 10 figures as well as one secret figure to collect!
Five of those are the figures you see here – all in their Puella Magi outfits.

As always, I’m absolutely amazed at how detailed the work is on such tiny figures… 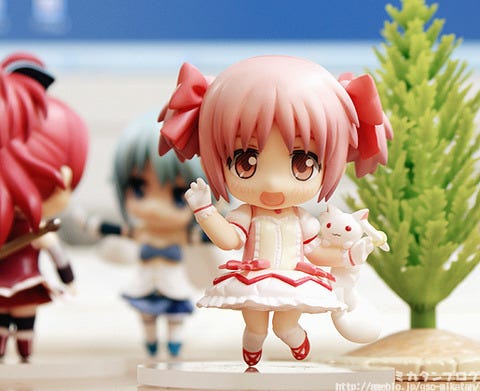 Right, let’s take a quick look at each of them!

Madoka in her adorable magical girl outfit featuring that lovely frilly skirt! Tiny parts like the ribbons on her dress, complicated shoes and lines on her skirt must have been very difficult to sculpt so tiny! QB is also super tiny and hanging off her arm – also super cute! ^^ 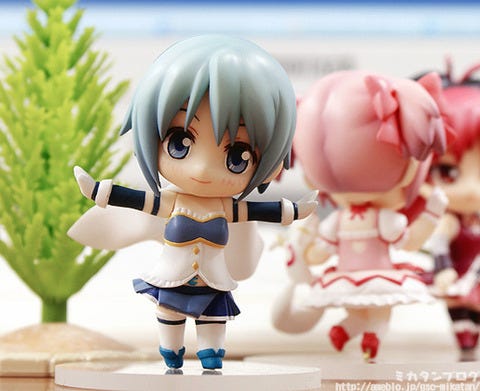 There are actually a lot of Goodsmile staff members that really love Sayaka!! I believe that this Nendo Petite of her is the first figure that has featured her in her Puella Magi outfit. I personally really like the trailing cape behind her as well as the pose! It’s such a pleasure to look at! 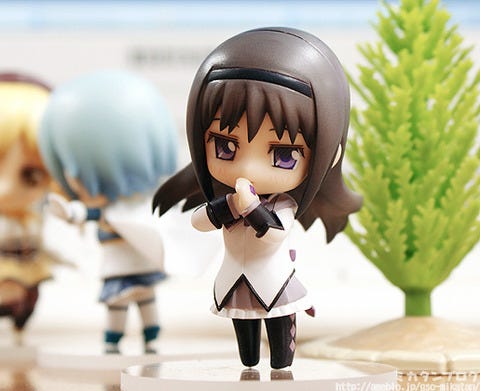 Homuhomu taking a sidelong glance as she looks as stunning as ever! Of course the Soul Gem on her left hand is there as well! (It has a diameter of about 1.5mm!) 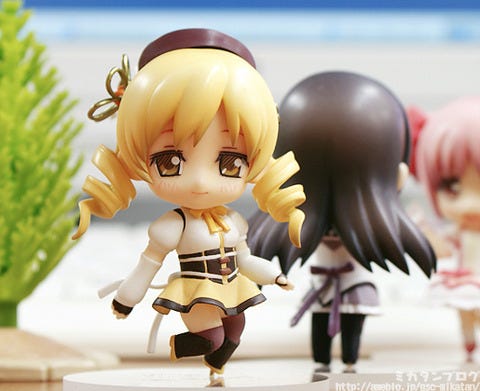 Her outfit and twirled hair all looks great in Nendo Petite form! It’s really incredible how well her hair accessory came out as well – it’s so tiny, but it looks identical to the one from the anime! Her skirt is also really nicely done – I kept having to retake photos as each time I did the new picture looked even better!

And by the way, whilst I’m sure Madoka fans will have noticed already… 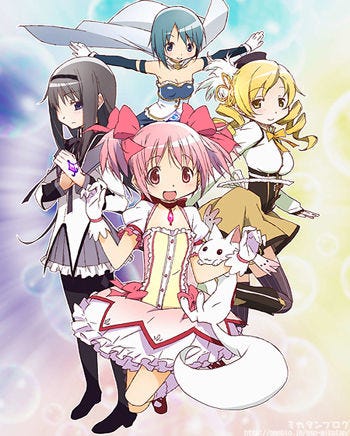 The Nendos are all based off the poses from this image! 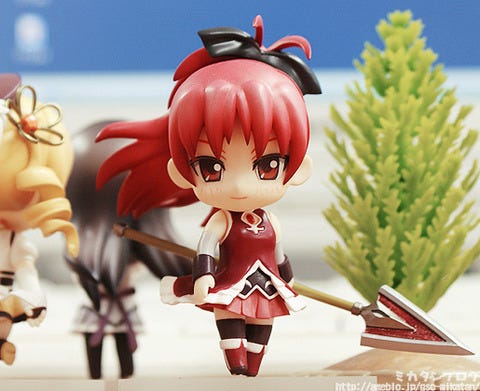 We would never leave her out of the line-up! It also seems like she is the one and only that comes holding a weapon! Her ponytail is fitted with a joint so you can move it left and right as well. 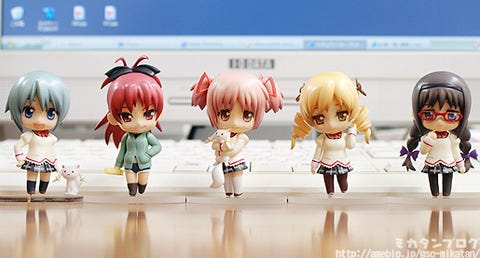 Moving on, the girls in their uniforms!

Well, except for Kyouko, seen she doesn’t wear a uniform – but she comes in her casual clothes! These five combined with the five above make up the ten figures in the set – then there is still one secret extra which you’ll have to find yourself!  (To be honest, I’ve never even seen it! :P) A lot of work has been put into these five as well though – even the hair on them has been changed so they are not the same as the Puella Magi versions of the girls! 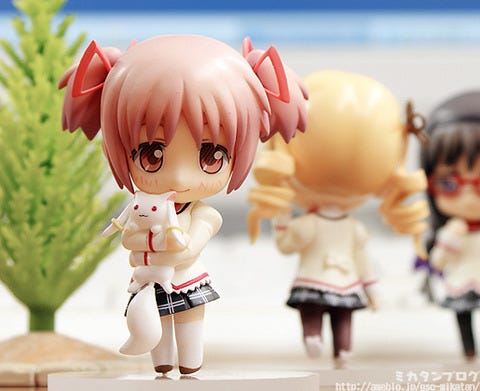 Once again QB is included with Madoka – this time being held by her with both arms – he is so cute!! You don’t see Madoka smiling when wearing her school uniform all that often, but smiles always look good on girls, don’t they? ^^ 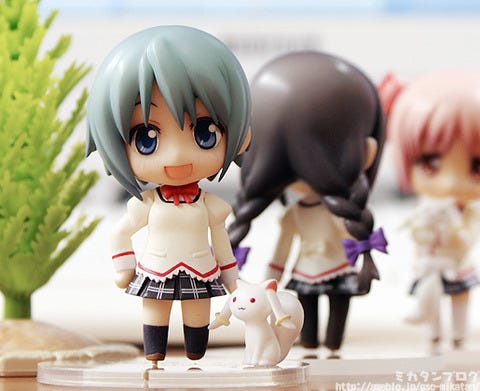 Plus as an added bonus, this version of Sayaka comes with a little sitting version of QB!  You have to remember that all these images are making them look much bigger than they really are – when you see just how tiny this QB is you’ll be amazed! :P 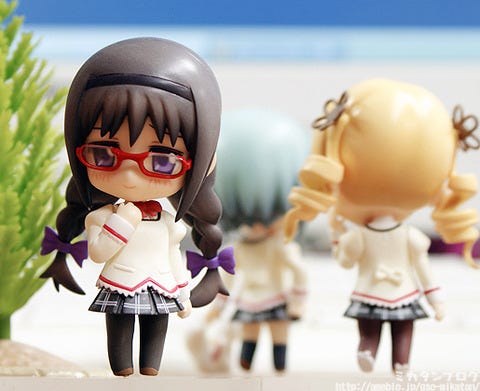 Homuhomu with her braided hair and red-framed glasses! I absolutely love this pose with her hand near her mouth and an embarrassed smile on her face! I hope all Homuhomu fans will be able to get their hands on the Puella Magi version as well as this version and display them together! 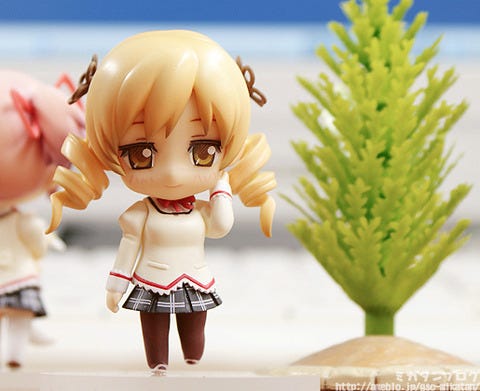 A very fitting expression and pose for the mature Mami-san! It’s strange how charming she looks even as a Nendo Petite. I’m not sure why, but she also has a very unique feeling to her with this pose, it feels very fresh to look at! 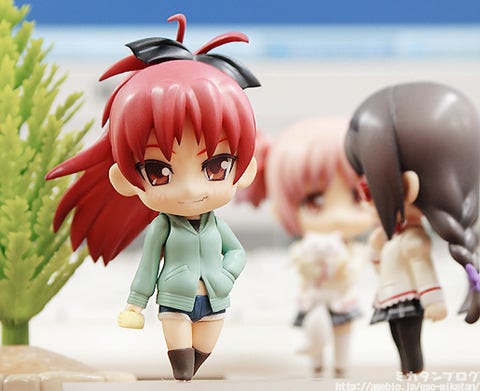 Kyouko comes in her hotpants and jacket instead of a school uniform like the others! The little peek at her belly button and even the delicious looking bar of something in her hands are all shrunk down to Nendo Petite size! Plus that expression is so ideal for Kyouko that it’s almost scary… in a great way of course!! 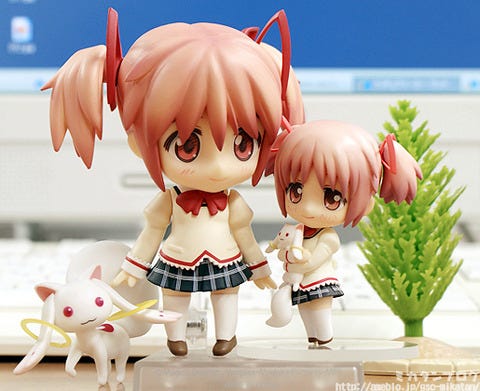 All ten above will be in the set along with a single secret character, totaling eleven figures to collect! Plus they are just 500JPY each! o/
For those who think it’s tedious to buy them one by one, or those who want to preorder – you can buy a box set of them that will include twelve figures, just speak with your local store!

They’ll be up on the GSC site tomorrow!