A Look at Professional Sculptor’s Tools with Takanon-sensei!

The other day the following message appeared on the letter corner:

Hello! I’m an everyday reader of your blog! I’m also always somehow losing money every time I read a review on your blog! :P

I noticed some of the most recent figures are made using 3DCG which is incredible, but I was just wondering – are the prototype figures generally made by hand?

I’d love to see what kind of tools the pros use when sculpting figures!!

I really want to know myself!!

So today I’m off to see Takanon – he has experience with both hand sculpting and 3D sculpting! 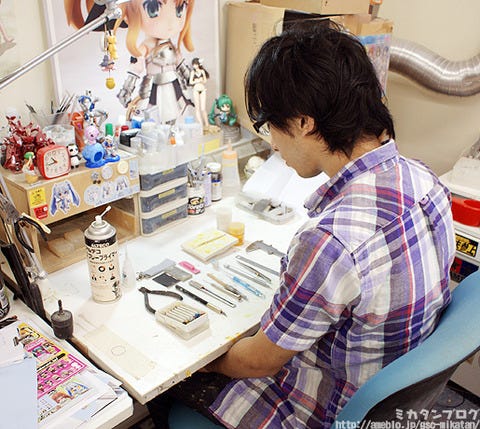 Even though I asked first thing in the morning he was happy to prepare some tools for us! Takanon-sensei is a wonderful sensei that jumps at the opportunity to help out with blog entries!

Before we start our studies, note that sculptors can use a lot of different raw materials, but Takanon-sensei uses ‘polyester putty’.

To put it in a nutshell, polyester putty is the kind of putty you carve down into the shape you want.

Sensei! Teach us about some of your tools! 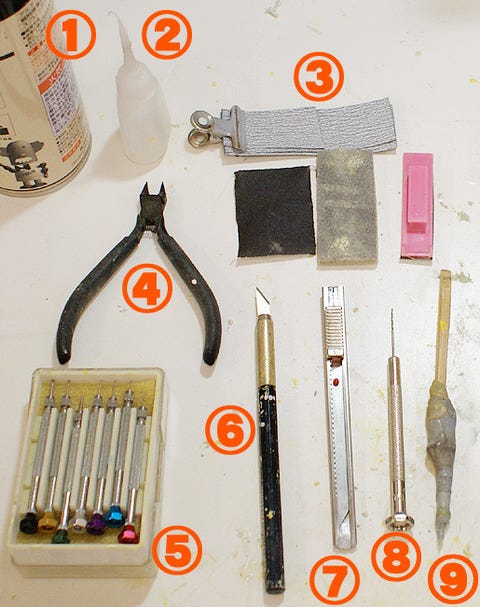 (1) Hardening Spray: Used to speed up the drying of glue.
(2) Instant Glue: Added to putty to make it harden faster.
(3) Sandpaper: Used for finishing touches and making smooth surfaces.
(4) Nippers: Used to cut things like Nendoroid joints and brass wires.
(5) Chisel Set: Used to carve out bits of putty.
(6) Design Knife: This is where the sculpting really begins!
(7) Craft Knife: Miscellaneous tasks.
(8) Pin Vice: Used to dig out holes. Size is changed based on diameter.
(9) Needle: Used along with the pin vice.

Sensei! What are the miscellaneous tasks of the craft knife?

So… it’s not used for the sculpting?

I kind of wanted to remove it from the photo seen it wasn’t involved… but Takanon insisted that it was depressing if the craft knife wasn’t included… so I left it in. :P

Although when it comes to reproduction the craft knife plays a more important role allowing for a quick job. If you’re interested, take a look at this article: 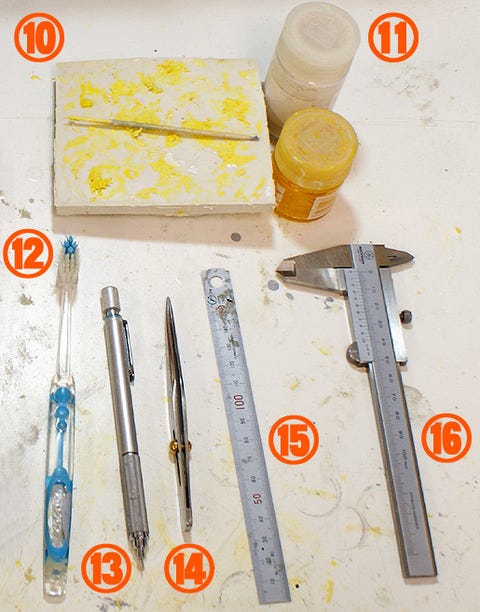 (10) Putty Stand: The polyester putty is made on this stand.
(11) Polyester Putty: White: Main Putty; Yellow: Hardening Agent.
(12) Tooth Brush: An old toothbrush. Cleans up carvings.
(13) Clutch Pencil: Used to mark where joints and eyes will be placed.
(14) Tweezers: Reach places when they can’t be reached by hand.
(15) Ruler: Simply used to make sure the sizes match up.
(16) Vernier Scale: Used to measure curved parts

Sensei! Are these all the tools sculptors use?

Can you give us a little more detailed explanation now? ^^ 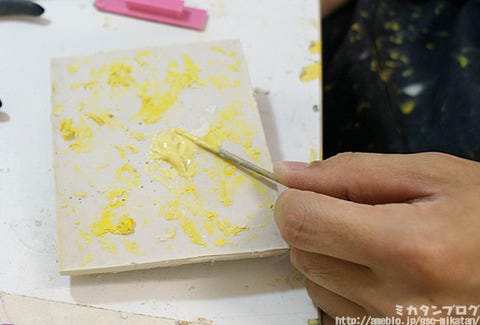 This is actually called something completely different at Max Factory – it seems the name differs between companies! ^^

This stand is used to mix the white and yellow parts of the polyester putty together using something like a toothpick.

This creates the raw materials for sculpting!

Once mixed the putty will slowly harden, so it goes in a cycle of a process – mix, mold, harden and sculpt. Normally the white and yellow parts are mixed at a 5:1 ratio, but sometimes more of the hardening agent is added to make it harden faster! 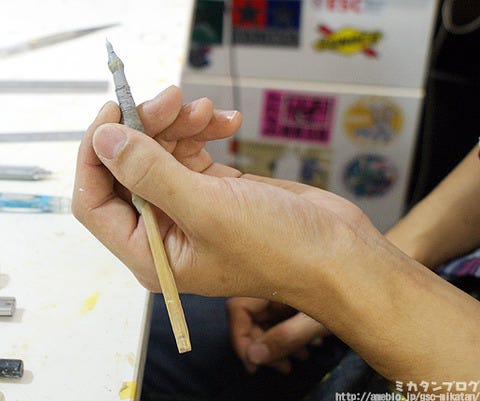 As I wrote above this has a supporting role – it is used along with the pin vice. Takanon-sensei has made his own hand holds using putty to make it easier to hold! Sensei is also left handed… being left handed is kinda cool I think. :P 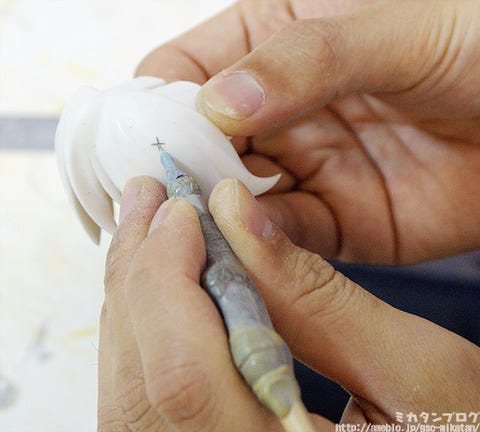 Let’s take a look at how exactly it is used!

First the area you want the hole is marked by the clutch pencil (13), then the needle (9) is used to make a little dent on the putty! 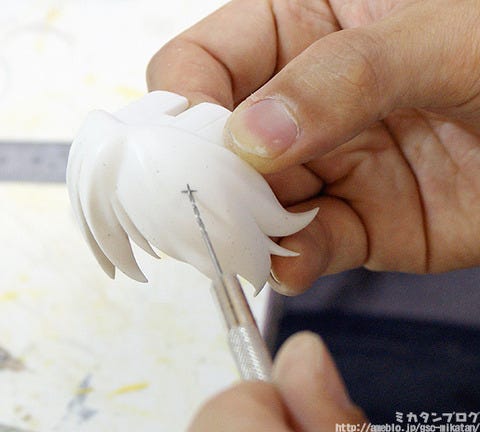 A pin vice (8) is then used on the dented area to make a hole!

I’m sure there are some people who thought that, as I know I did! :P

Apparently by just using the pin vice without a dent, it’s very easy to slip and not make a straight hole!

Bascially it’s just a way to make sure that it works out smoothly! 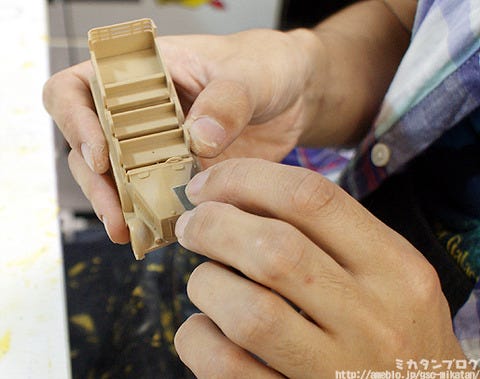 There are apparently a lot of different types of sandpaper.

To divide them into three broad types, there would be paper, cloth and sponge types.

The paper type is used for straight lines, while the cloth and sponge types are much softer and are used for curved surfaces. Right here Takanon is making use of the paper type. 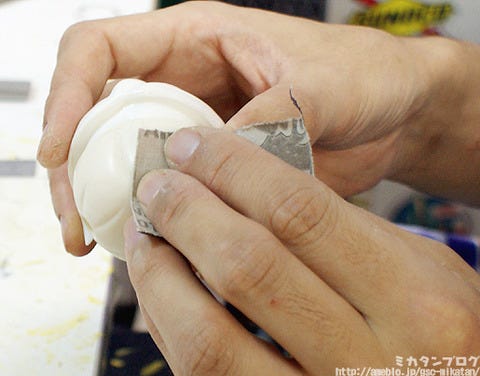 This here is the cloth type!

It’s often used on parts like heads that have a clearly curved surface. It actually seems like quite a lot of fun to work with, I kind of want to give it a try myself one day. (Though I doubt the world will be so kind as to let me do so).

By the way, in the first picture of the tools with numbers there was a little pink thing with a handle – this is also a type of file like the sandpaper, and is called a ‘Tiler’. The opposite side of the handle has a rough surface that can be replaced by double-sided tape when it wears away. 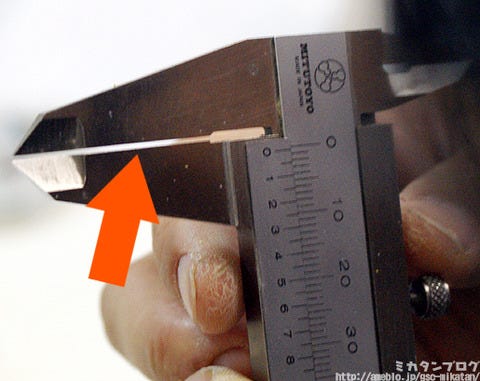 This is to calculate things like whether or not the thickness of the arms is the same on both sides. Measuring curved surfaces with a straight ruler is pretty much impossible, so that’s when the Vernier scale comes into play! You simply place the object to be measured between the two parts and you get the exact size.

It is used to make sure about things like that – the image above is that 0.4mm! It’s so tiny! I don’t think I could ever become a sculptor… I’d never pay enough attention to the details! 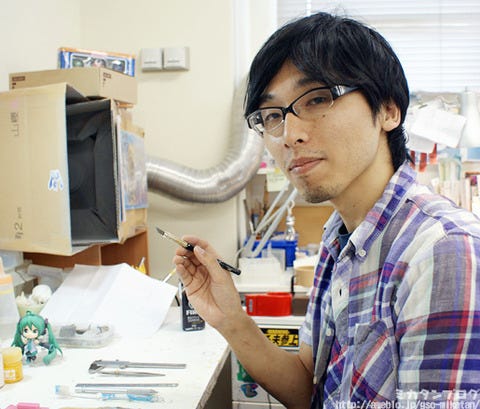 A question I asked Sensei and received a true master’s reply!

“As long as I have (6) the design knife I would be fine! It’s the basis of everything!”

Of course the tools we took a look at today are useful, but when it comes down to it, as long as you have the design knife you can still do the sculpting!

Thank you for showing us behind the scenes of a master sculptor today! It was a lot of fun!  (`･ω･´)ゞ

Takanon-sensei is a very busy man, but even so he took some time off for this – thanks a lot! Also a big thanks to Rurumenmen who sent in the mail leading to this blog entry!! I hope it has given you at least an idea of what tools the sculptors here at GSC use!

The opening animation for Black Rock Shooter THE GAME is here!

Apparently the animation was done by ‘ufotable’, the group responsible for awesome anime like Kara no Kyoukai!!

Kondou-san, the man in charge really put a lot of effort into this to get it to this incredible quality! The music and video give a different feeling to the anime, but it’s just as incredible as ever!! Take a look: http://www.nicovideo.jp/watch/1308097319?via=thumb_watch

Tomorrow we’ll be taking a look at the WonFes Products!!

This is still the WonHobby 13 page, but it will change to WonHobby 14 on Friday!