Hi again everyone!
I’ve managed to catch a summer cold thanks to the sudden temperature change, but I’m just taking loads of medicine to get me through the day as normal!

Anyway, today we’ll be continuing with this corner!

Today we’ll take a look at some of the lovely photos you all sent in!

My heart has been stolen by figma Mato-chan…

I hope we can see a figma of her in her casual clothes, and maybe a Nendoroid as well! I’m also looking forward to the Yomi-chan figma!! 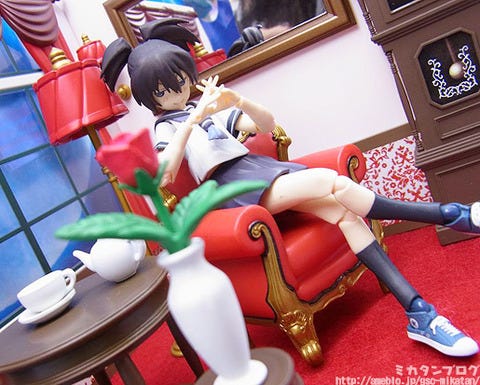 That dark glare and rose are wonderful!! (*ﾟ∀ﾟ)=3

This also goes to show just how well Phat! Company’s playsets work with figmas! I must say I love Yomi as well – those who are debating whether to grab her or not, look how great she looks here! (Sorry for advertising with your photo! :P)

I knew this background which was used in the series was close by, so I decided to go out and take some photos. It was a nice sunny day and I think the pictures came out really nicely. (at least, by my standards.)
I absolutely love the folded arms and that confident expression. In just the short time she was out I managed to drop her while taking the photo… she injured her back… 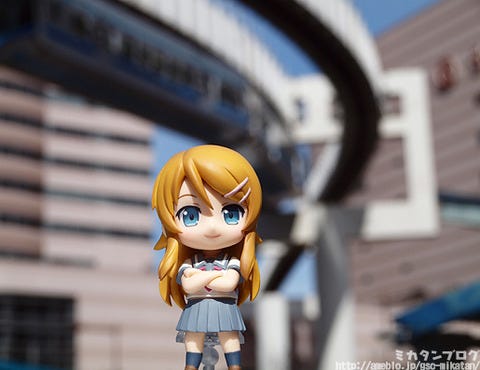 Thank you for the pilgrimage! (･ω･)ﾉ

I believe Station Yamada also came to this place to take pictures with Kirino. :P

I hope her back is alright! Taking photos outdoors does often lead to more injuries than indoor photography – consider bolstering the joints with some double sided tape to avoid unnecessary damage!

My mom is a Yui fan so when I go out with her I bring Yui along with me. She even said she wanted her own one! It made me kind of happy :P
It just made me wonder how many Nendoroid fans are made through situations like that…
Anyway, here is a photo of a smiling Yui, I hope it brings a smile to everyone! 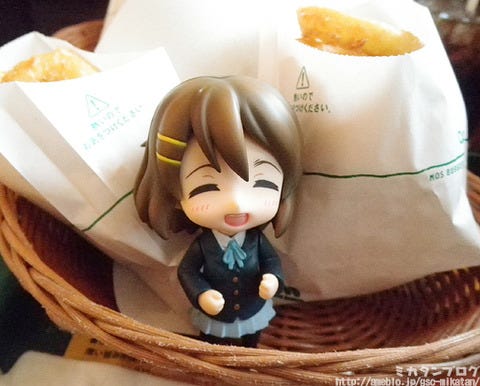 I’m glad that you are able to enjoy Nendoroids with your mother! Be sure to take her out all over the place and make some more lovely memories!

I’m sure we can spread the happiness of this smile to even more people!

I’ve sent through a couple of photos. They were taken at Tokushima park and my house. 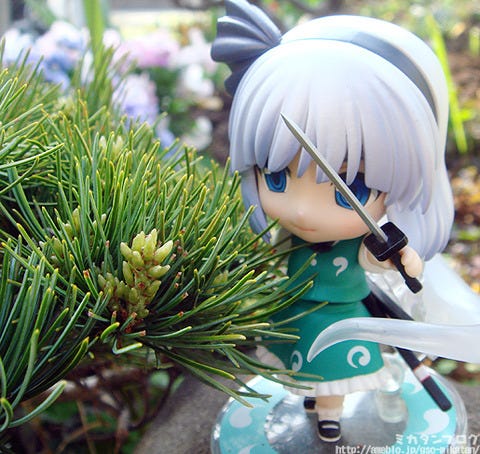 The plant she is working with is a pine (I think?) – it really creates a nice Japanese atmosphere that suits her so nicely! To see her working so hard on plants that are so big for her… I feel like I need to give her some treats… (plastic ones at least…) 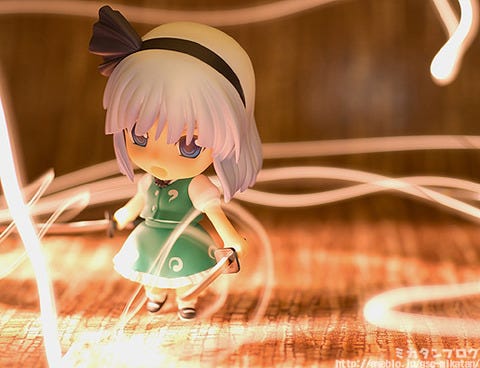 It is indeed Myon!

I was asking for cherry blossom images not too long ago, so I really did think it would be one… :/

The wispy spirit effects are photoshopped, right? I also notice I can’t see the stand at all, so it’s very well done!

I know the Angel Beats! Petite Nendoroid Sets 1 & 2 have already been released, but I hope we’ll see some of the Girls Dead Monster girls as well – the girls that ran the band in the afterlife! Along with the drums! ＞ω＜

That’s it, hope you’ll consider it! 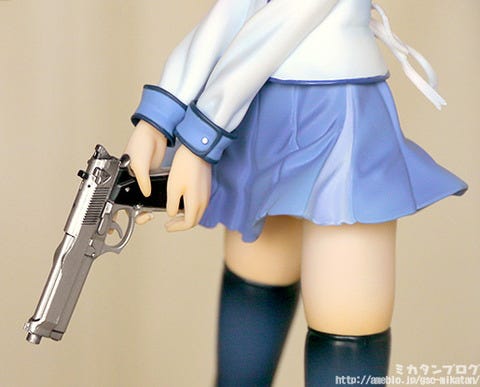 There were a lot of readers who sent photos along with product requests this time around… that’s cheating! :P

It seems Kumagaya-san has the same tastes as me…

I just saw something really wonderful~
At about 3 o’clock today, the Earth was as close to the Moon as possible! It looked so big! Apparently this only happens once every 18 years!
I decided that Flandre was the most appropriate for the moon, so I took her out onto the veranda for some quick photography! It was really cold though, so I didn’t stay long. ^^;
The picture was taken on a mini digital camera, so unfortunately this was the best lighting balance I could get. I’m sure those with nicer cameras would have grabbed a much niver picture, but I personally loved this anyway, so I decided to send it through to you. 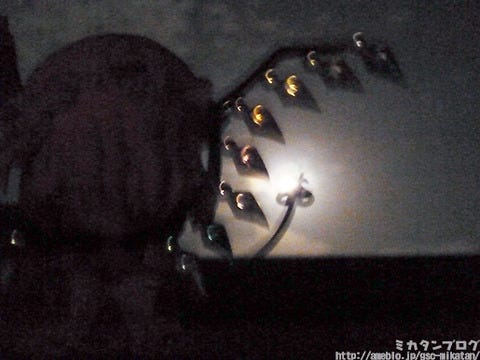 Plus the light is reflecting off Flan-chan’s wings which makes it look really pretty! It’s a really nice photo!

Photography in the dark is indeed very difficult, I’m sure it’d just be a blur if I ever tried… orz.

I took the 2009 Racing Miku with me to watch the races – congradutions on getting 5th place in your first match, GSR! 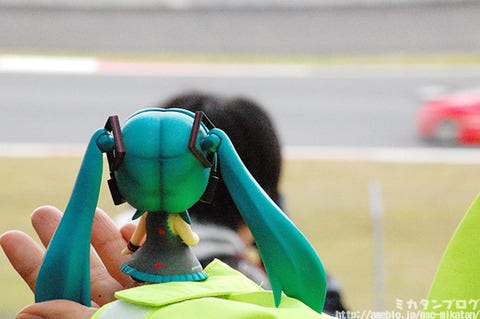 Racing Miku watching from a hand-chair!

I love photos like this that really show the difference in size between people and Nendoroids! :P The way it has been taken from the back also really makes it feel like she is watching the races herself – it’s super cute!
I can’t wait to see how much the ‘Hatsune Miku GOODSMILE BMW Z4’ can rise up in the races to come!

Spring really is the season of flowers… thus during Golden Week I decided to go out with Miku-san to take a look at the Spring flowers – Miku looked so cute with the flowers, it made me feel all warm and happy inside. I wanted to share the feeling, so I thought I’d send you a photo! 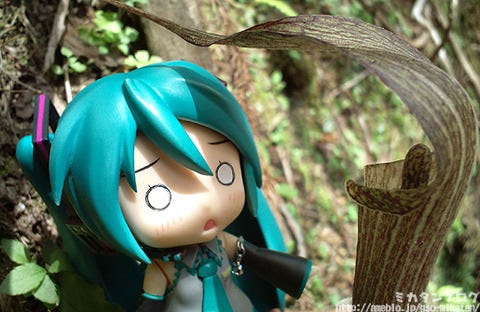 If I was there I imagine she would ask “What is this?”, and then I’d respond “If you touch it, it’ll eat you up!” just to see her frightened reaction!!

The expression is from Azunyan, right? It’s such a wonderful expression to use on anyone…

I have finally found the time to send through some photos of Kyon that I took last month.The cherry blossoms had already all fallen, so instead we just went for a walk to look at the dandelions around the local park :P
It was past noon when we left, so there were lots of families, couples, and people walking their dogs – it was quite hard to find a place for a good photo… but I eventually got a couple, so I decided to send them through to you. 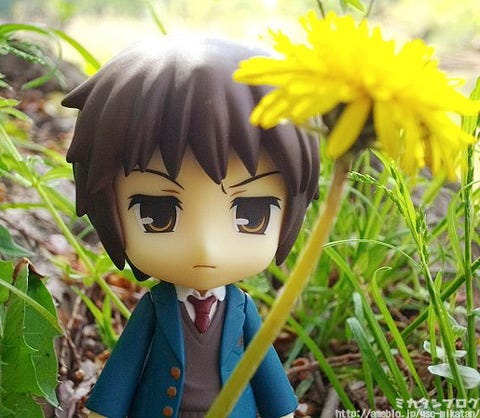 I get the feeling that he would look perfect if he was placed together with the earlier Miku….

I just recieved my long awaited Gold Saw, and took a picture with my cellphone. The title is “Moonlit Gold Saw”. 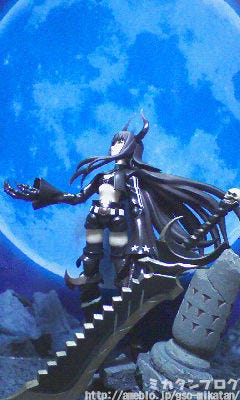 It’s a little bit small seen it was taken with a cellphone camera. but the blue background and moon really bring out Gold Saw’s beauty. The rubble around the floor and background is also a nice little touch!

I heard you were going on and on about Menma, so I decided to send some old photos I took in Chichibu when I went to look at the cherry blossom lawns. This picture was taken near Chichibu shrine.

I also hearby place my request for a Eirin Yagokoro Nendoroid! 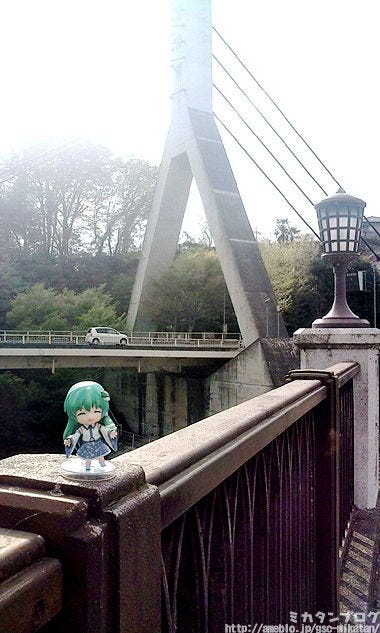 When I saw the picture I was positive you were going to ask for Ano Hana Nendoroids… :P

Unfortunately the Nendoroid line-up is a secret so I can’t say anything on here (there is already a lot of gray parts on the blog…), but we’ll do out best to cater to all the popular requests!

The other day, I went to the Nendoroid cafe I managed to get a really nice picture – while I was walking back I decided I just had to send this one through to you.

It seems that my KAITO is really good friends with the Good Smile Seijin! I took him home with me as well, so I’m sure they’ll become the best of friends back at my house :P 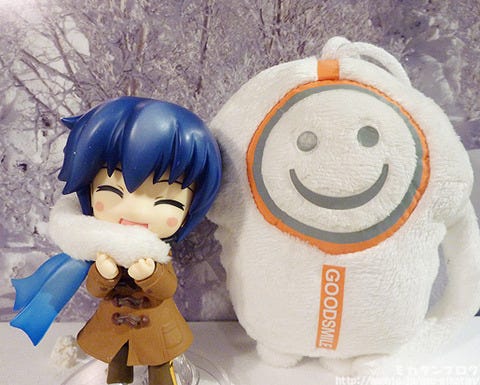 It’s hard to explain, but it’s so adorable!!

The way he is putting his arm around KAITO like that… :O
A truly wonderful photo – thank you! I really love it!

The cafe can be found in Chiba, Matsudo – so do stop by if you have the chance! I hope you’ll stop by again as well, Mizuna!

Anyway, that brings the 53rd Kuroyagi-san’s letter corner to an end!
Thanks to everyone who sent in mail!

As always, I’m always looking for more mail from readers! I promise to read it, and swear I won’t eat it! :P

But that’s all for today!
I hope to see you all again tomorrow!!

I’ll be showing a load more pictures that everyone has sent in!