The next few days are full of Nendoroid releases! 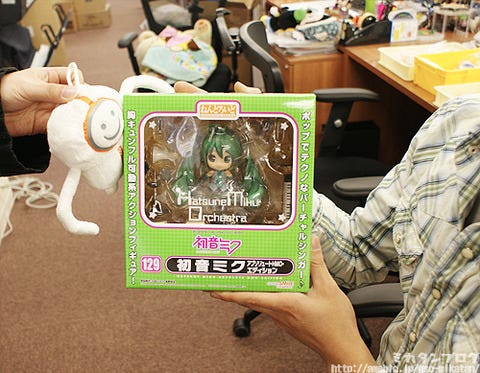 She’ll be in stores on the 31st January! 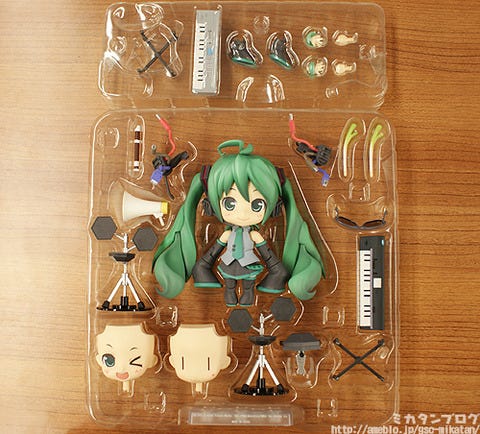 Not only is she fully posable, she also comes with a ton of extras!

For those of you who store the Nendoroid away in the blister pack after playing around with it can use this image as a reference as to where all the pieces go.  Trying to figure out where all the little pieces go could take ages. ^^; 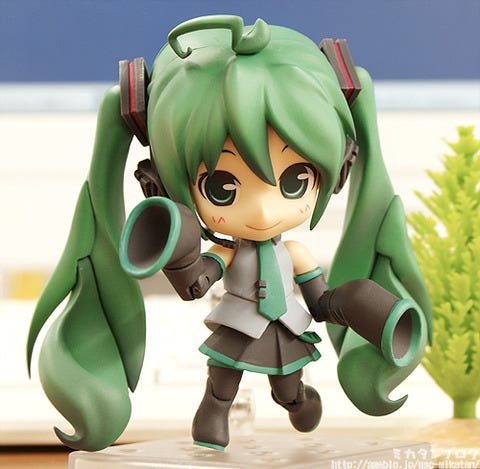 YMO (Yellow Magic Orchestra) released a CD called “HMO (Hatsune Miku Orchestra)”, which featured this version of Miku illustrated by manga artist Kuu as the illustration on the jacket cover – the jacket cover was so popular that it is now getting it’s very own Nendoroid rendition!

Her over-sized sleeves suit look great as a Nendoroid!
You can’t call that baggy look anything but cute!! 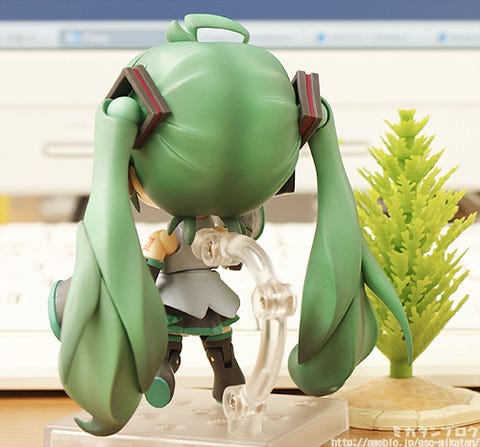 Even her hair is fully posable!

Both the base of the twintails and extra parts along the hair have joints, so you can pose it in many weird and wonderful ways!

The stand she uses is the same that the fully posable Saber used – it connects to her back allowing lots of poses but also keeping her nice and stable. 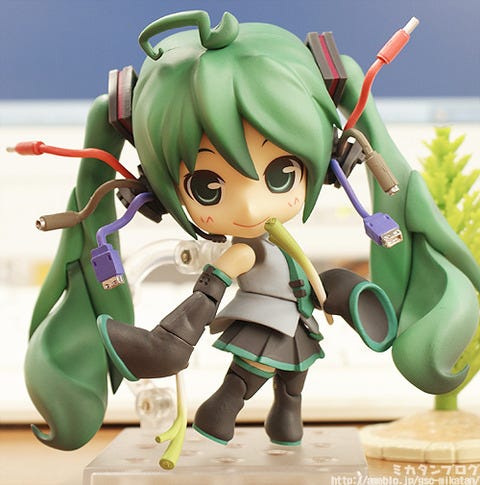 Let’s take a quick look at all the extra parts… there are so many…!

First up – her headphones and two leeks!

Her headphones have a ton of wires coming out of them just like in the original illustration. The leeks can be held in her hands even though you can’t even see her hands because of her giant sleeves :P

You very well might have seen this pose before, because… 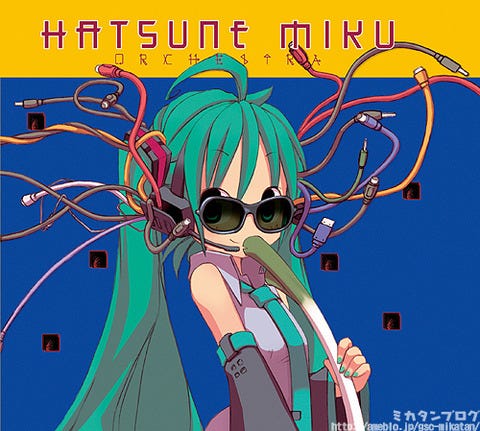 It’s the pose from the HMO Jacket!

You can recreate the pose from the jacket cover nicely!

But there’s just one thing missing… 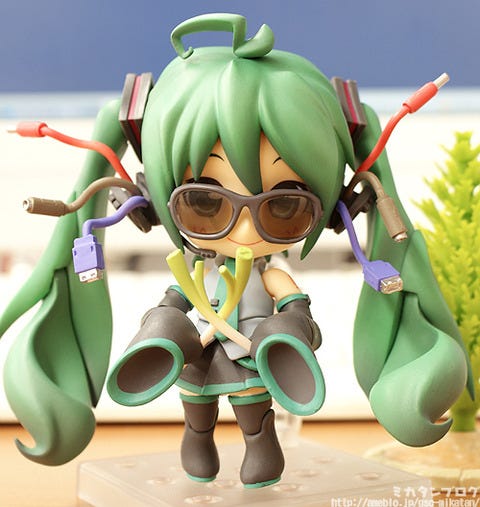 Her sunglasses! They’re included as well!

You need to take off her fringe parts to put them on, but after that they attach easily! 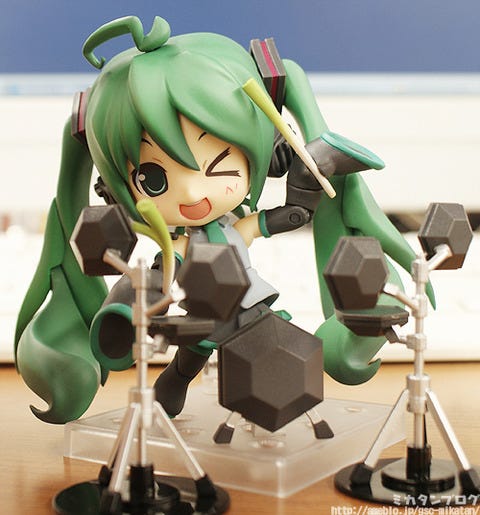 A winking face and an electric drum set!

The entire drum set is included with the figure! You can pose her playing the drums with her leek drumsticks!

But there are still even more extras for HMO fans! 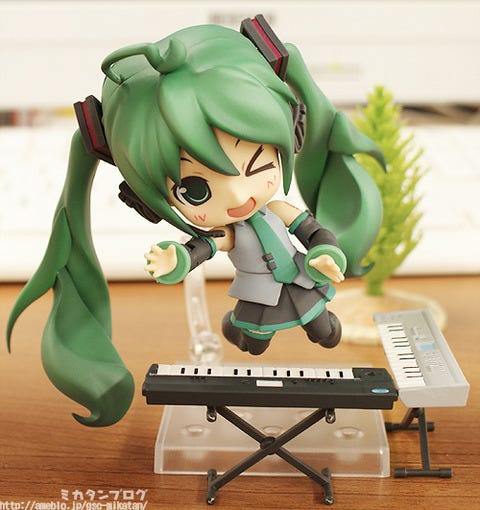 I was just as surprised when I first saw it. ^^;

Originally when the product was announced it only came with a single back keyboard… but it turns out you’ll get a gray keyboard as well! :P

Apparently this is the keyboard that YMO uses, while the black keyboard is the one seen in the HMO PV. Apparently the gray keyboard was added because YMO asked for it specifically! 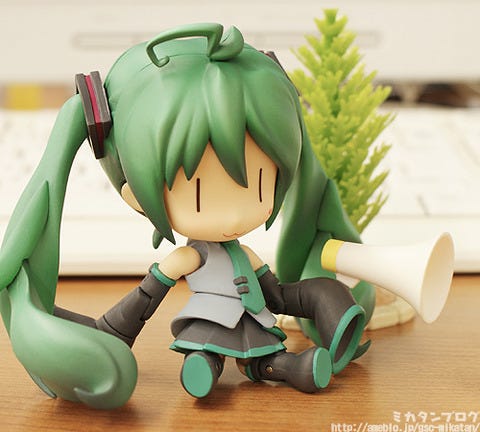 There are also extra parts to cover up the holes where her headset would normally be – so you can display her without it without the figure looking too strange. Yay! 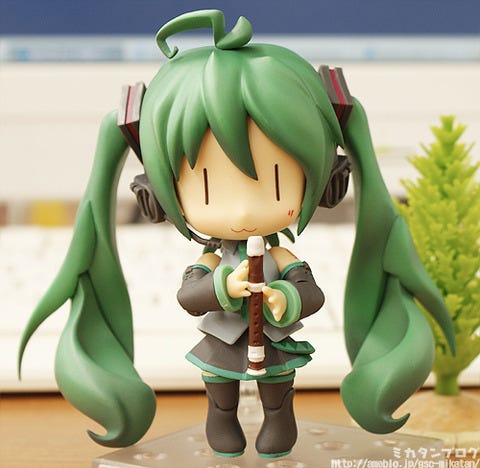 And finally… her recorder!

Although in the HMO PV the recorder was actually played by Len.

Nendoroid Rin and Len came with blank faces… and this figure comes with extra face stickers to recreate HMO Rin and Len!

The stickers are located on the inside of the box, so make sure to find them! 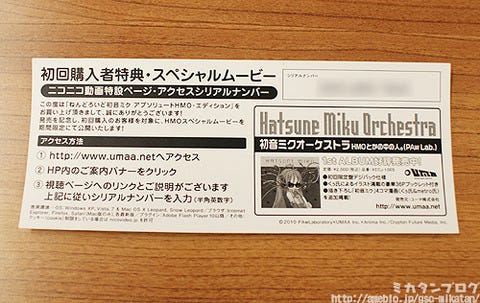 Plus as a bonus you’ll also get a ticket that let’s you watch a special movie!

Just put the serial number into the website and enjoy the movie… who knows what you’ll get the privilege of watching! :O 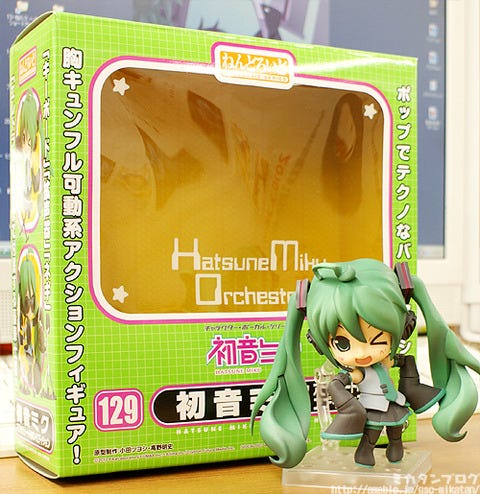 The box really suits her colors!

She’ll be on sale at our partner shops from tomorrow!

For ordering information or questions check out our partner shops. (Japanese Only) 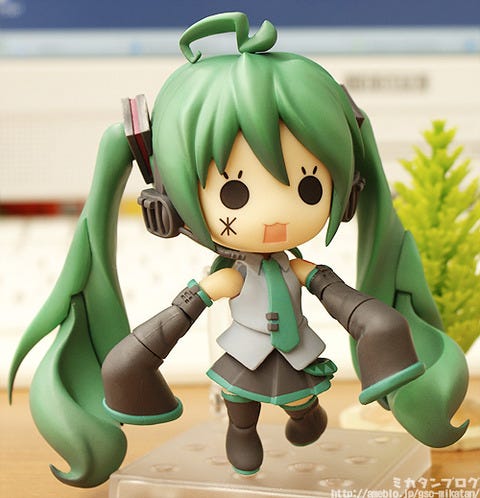 Anyway… whether you’ve realized it or not it’s already Friday!

There are only 9 days till WonFes!

I hope everyone had a good week!
February 6th is closing in quickly! We’ve been preparing a ton, so I hope you’ll join us at WonFes if you can!