16 days to the Wonder Festival! 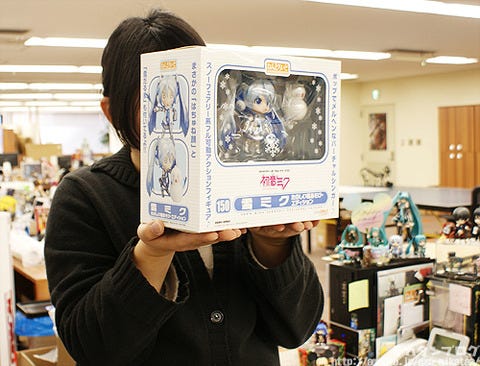 Yesterday I went over the first of the WonFes products, Nendoroid Mato & Yomi Set!

Today I’m going to be looking at the second!

S-Sorry… I think we added too many things…

During my trip to China in December I was making sure that she was being made just right! 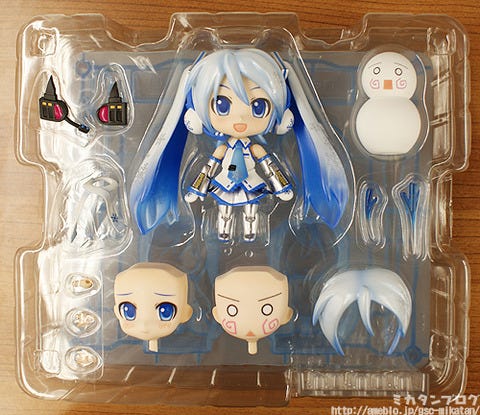 Let’s get started on the review!

The pack is filled with extra parts! A Nendo Petite sized snowman, two different expressions, hair parts for a Hachune version, different hand parts, headsets…. and that’s not all!

She even comes with a Miku-shaped ice tray!

You can see the ice tray’s blue outline in the back of the blister pack. 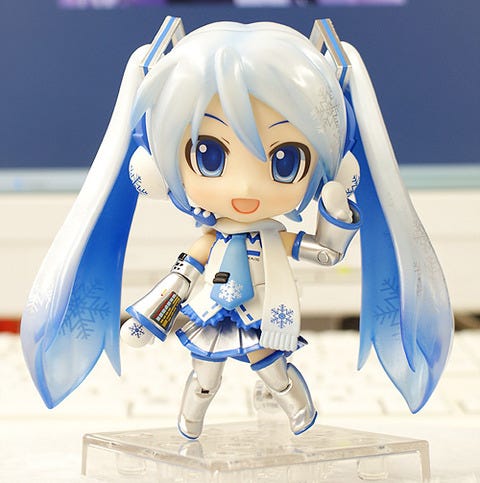 She’s back again for the 62nd Sapporo Snow Festival, to commemorate the giant snow sculpture of Miku at the event!

Snow Miku is going to be bouncing and dancing around in the game, so it’s only fair that the Nendoroid can do it as well!! If you’re looking for more info about the module, take a look at SEGA’s site below:

And if you’re looking for more info about the Snow Festival, you can find more information on Crypton’s website:

There are lots of other awesome looking goods on sale! 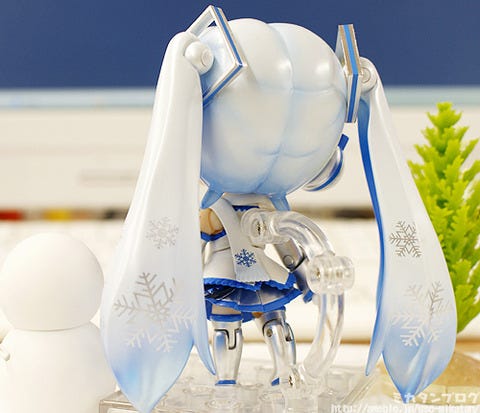 The silver snowflakes in her hair look just the same as the previous version… still just as beautiful as ever! The hair also uses clear plastic just like before… isn’t it beautiful!? 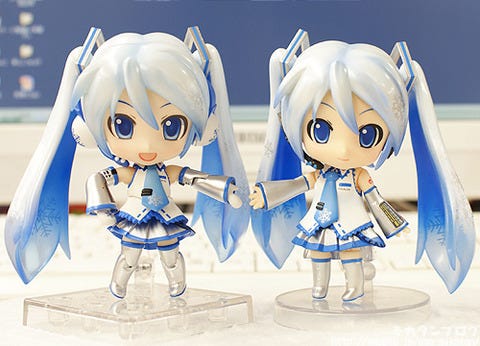 Let’s compare her with the last Snow Miku!

This year’s looks a little more grown up, but they’re both adorable! 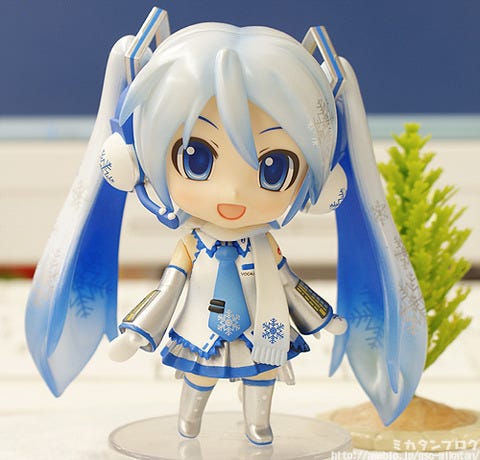 You can put the new parts on the old Snow Miku!

The scarf, earmuffs and gloves all fit her perfectly!

If you want to put the new expressions on the old Miku, you’ll have to use the new fringe parts as well! 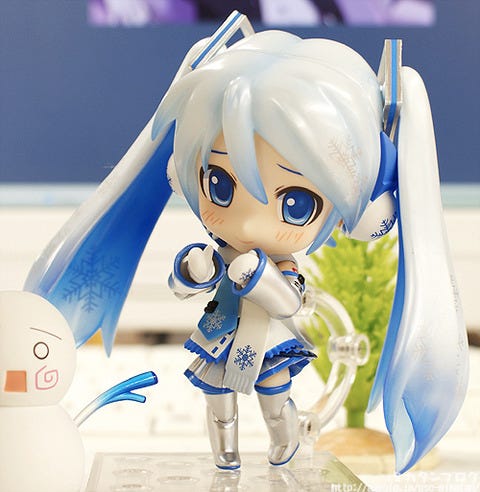 Anyway, let’s get back to the new Miku’s review!

She comes with this embarrassed face!

Snow Miku was never based on any illustrations or anything, so all the expressions were designed by Kawapon. They were still being modified at the very last moments of being made… I hope you enjoy them as much as I do! 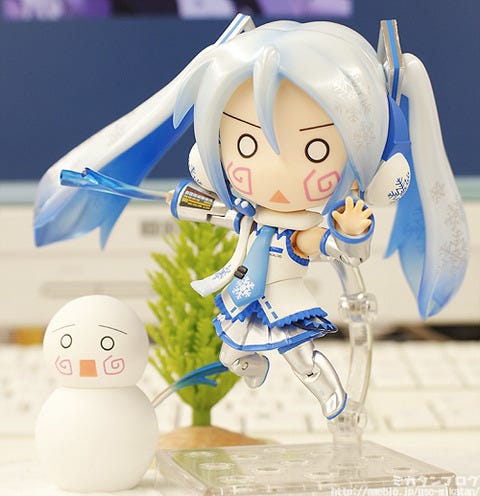 Although it’s a different Hachune face to the previous figure!

Of course she also comes with a ice leek to hold!

And using the new posability you can make epic poses like the one above! 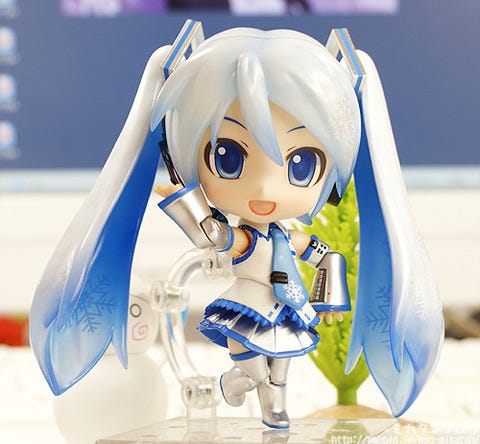 You can take off all the winter clothes!

The scarf, earmuffs and gloves can all be removed! In place of the earmuffs you can put her black headset on for a more Miku-esque pose! 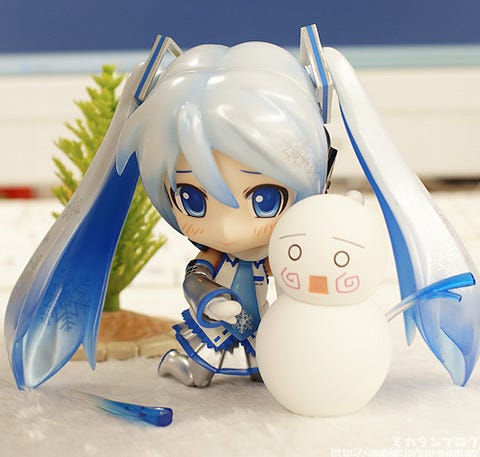 It’s got a Hachune face! And the arms are made of ice leeks! It’s adorable!

And because it’s Nendoroid Petite size… 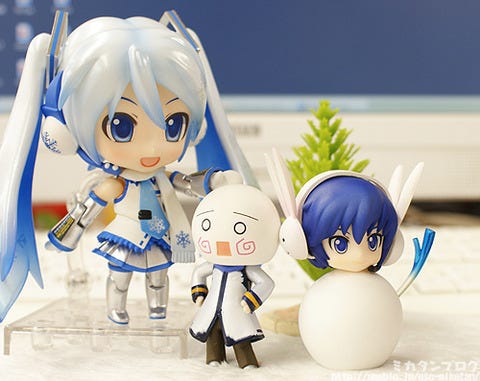 You can switch heads with other Petites!

It uses the normal connector used in Nendo Petites, so you can try it with all sorts of characters! 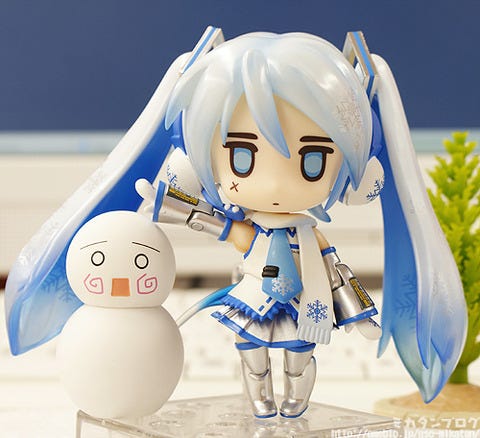 This is how she looks with the charming CHAN×CO Face!

The eye color even matches! It looks great! This face along with the Hachune face… I think I’m going to die from cuteness!!! Aaahh!! 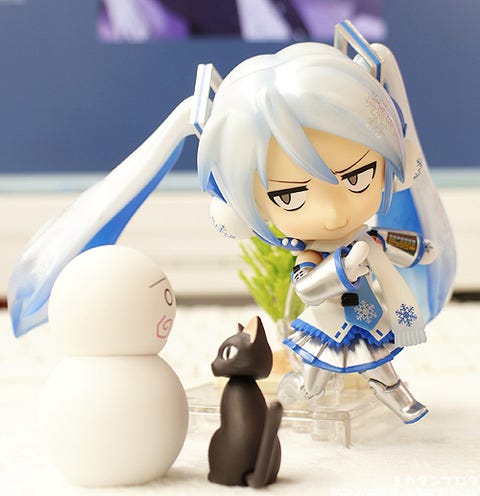 This one comes from Nendoroid Shiki Ryougi!

I wanted to try and pose her in a slick Shiki-like pose! It’s a lot of fun trying to think up and pose the fully posable Nendoroids like this!! 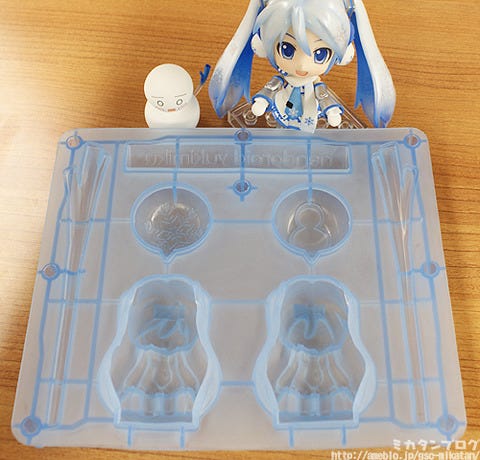 The first public view of this extra…

It is made of a very soft silicone-like material. This obviously came from the idea of making Miku into your very own ice sculptures for the snow festival!

I’ll post the results on the blog at a later stage! 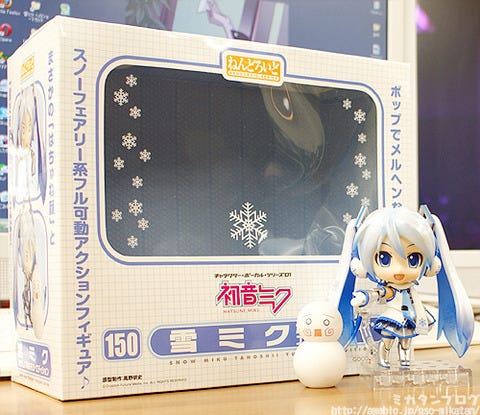 I’m sure you’ll have fun with all the winter gear and the snowman as well! (･∀･)

There are three ways to get your hands on them!

For more information, you can check out the ‘SNOW MIKU for SAPPORO2011’ webpage below:

Sales will start on 7th February 2011 from 0:00!
For more details a ‘Web Sales Page’ will be put up soon! Just wait a little more!

Unfortunately we do not ship these figures overseas!

If you’re looking for more information…

The site is updated regularly, so be sure to take a look now and then!

That’s all for today!
I hope to see you all again next week! (・∀・)ノ゛

Takanon, Kawapon, Imai-kun, Gakkun, Station and Mery-san…
Everyone working at the factory in China…
Crypton…
SEGA…
Everyone else who helped in the slightest way…

Snow Miku has come out perfectly! Thank you all so much!