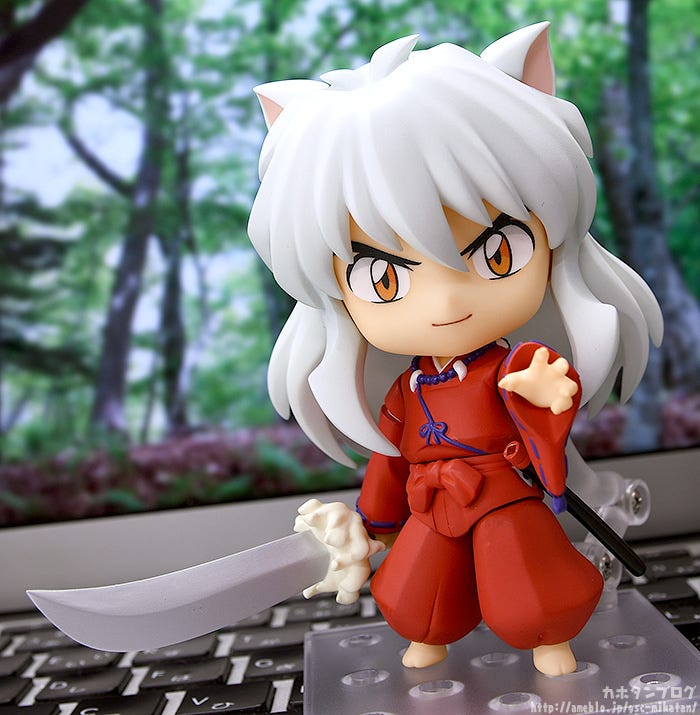 From the popular manga series “Inuyasha” comes a Nendoroid of Inuyasha, the half-demon son of a dog demon father and human mother. He comes with three face plates including his confident standard expression, a more intimidating combat expression and a comical confused expression from when Kagome commands him to “Sit!”

Interchangeable hand parts with sharp claws are included, allowing you to recreate his Iron Reaver Soul Stealer attack. He can also be posed holding his sword, Tessaiga! Special arm and leg parts to display him sitting are included as well.

Enjoy displaying him in your favorite poses from the series. Be sure to add the palm-sized Inuyasha to your collection!

“I swear I’ll always protect you.”

Inuyasha’s dog-like ears, silver hair, beaded necklace, red outfit and his sword Tessaiga have all been recreated in stunning detail! He also comes with interchangeable arm parts that allow you to display him holding Tessaiga in front of him! Useful for recreating combat scenes! ▲Bent leg parts for giving him a strong combat stance are included too!

By the way, a sheathed version of Tessaiga is also included! ▲The scabbard can be easily attached and removed from his hip!

Finally for his third expression… …it’s his popular confused expression from when Kagome commands him to “Sit!”

As you may have noticed, interchangeable lower half parts and arm parts are included in order to display him sitting! ▲Here’s a look from the back!

Since Nendoroids are just 10cm tall, you can display him in the palm of your hand when he’s sitting like this! Even in Nendoroid form you can recreate Inuyasha plummeting to the ground after Kagome utters that familiar command: “Sit, boy!”

Take note of how his right hand has been sculpted to bring out Rumiko Takahashi’s style in Nendoroid form!

Be sure to display him in all of your favorite poses when you take him home! Available for preorder from the 12th of March!

Preorders for many products at the GOODSMILE ONLINE SHOP are closing soon! Here are the products closing the 19th March 2020 (Thu) at 12:00JST!

Preorders for many products at the GOODSMILE ONLINE SHOP US are closing soon! Here are the products closing the 19th March 2020 (Thu) at 12:00JST!